It was the time of glasnost and perestroika, the last chapter of Soviet history. Of over 140 films banned by authorities under the Communists, the 1967 film COMMISSAR, directed by Aleksandr Askoldov, was the last film waiting to be rehabilitated. At the 1987 Moscow Film Festival, in a public confrontation with authorities, filmmakers and delegates from the San Francisco International Film Festival demanded to free the film “from prison” after its 20 years on the shelf. Under pressure the officials relented and the film was finally screened to a standing ovation, hailed as a masterpiece, and went on to worldwide distribution and international acclaim.

The film had been controversial in the Soviet Union simply because of its sympathetic portrayal of Jews. COMMISSAR tells the tale of a pregnant Red Army Commissar during the 1920’s Russian Civil War who is ordered to live with an impoverished but generous and loving Jewish family. When the White Army approaches, she must choose between her commitment to the Revolution and her attachment to her newborn child. With its brilliant montage sequences, avant-garde score, and great performances, the film is a strong statement about the effects of violence on the psyche, while at the same time it is a moving plea for a more moral world.

When the film was made, the film studio demanded Askoldov eliminate the Jewishness in the story and cut key scenes; he refused. He was literally thrown out of the studio, stripped of his Communist Party membership and went from short-term job to short term job as a political outcast, his film career completely derailed. He would never again have steady employment. This, after his father had been arrested and shot by Stalin’s secret police and his mother imprisoned. 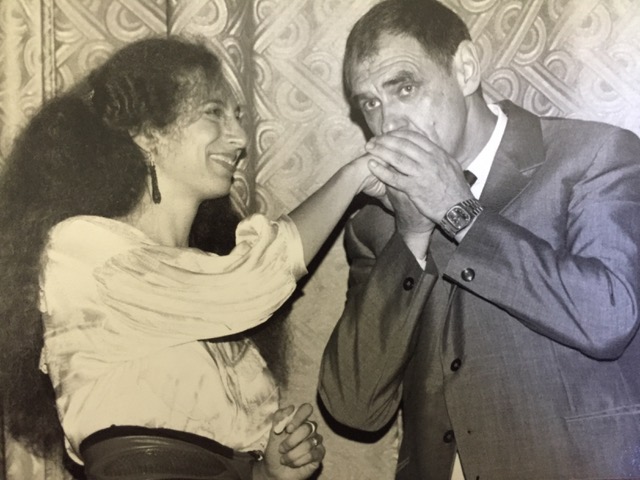 I met Askoldov when I was the Director of the San Francisco Jewish Film Festival. We invited him to show the film at our festival the year after the Moscow rehabilitation, and in the new spirit of the times, he was given permission to come to town with a delegation of actors including the film’s co-star Raisa Niadashkovskaja and once child actor, now boxer, Paul (Pavlik) Levin. We screened the film to a sold-out audience at our majestic Castro Theater, and we awarded Askoldov a special commendation recognizing his steadfastness and struggles on behalf of Soviet Jews. He was one of the most elegant and charming guests we ever hosted, happily participating in Q and A’s, parties and press events.

It was a Soviet-American cross-cultural love-fest. Gifts were given; there was abundant vodka, and long toasts to each other’s health lasted from late at night to the early morning. What was once forbidden was now possible – travel and cinema; the sky was the limit. It was a moment of optimism, and Askoldov hoped to make another film, this one about the great Soviet Jewish actor Solomon Mikhoels. But even at that revolutionary moment of cultural and new political freedoms, Askoldov warned that glasnost was “a fragile flower.”

When the San Francisco Jewish Film Festival partnered with the Soviet Cinematographers Union in 1990 to present a Jewish Film Festival in Moscow, I met up with Askoldov again, this time for dinner at his home with his wife Svetlana and a few others of our American delegation to the Festival, including Festival Co-Director Janis Plotkin and our Board Chair Alan Snitow. The Festival had been plagued by controversies – of course the usual funding challenges, but in addition, political controversies on both sides of the Atlantic. The American Jewish establishment and the Israeli foreign office actively tried to scuttle the event – they felt that we were encouraging the revival of Jewish culture in Russia (true), that violent anti-Semitism was on the horizon in Russia (false), and our plans for a film festival didn’t mesh with their vigorous campaign to encourage Soviet Jewish emigration to Israel. And then in Moscow, the anti-Semitic Mayor tried to cancel the Festival altogether, saying there were too many Jewish events taking place there (there were none at the time). We had to mobilize our U.S. Senators, the Congress of People’s Deputies, and the world media in order to force the Mayor to back down. In the end the Festival was a huge success, over 50,000 people attended our international selection of recent documentaries and features, international celebrities made appearances, and it became the largest Jewish cultural event in the history of the Soviet Union.

When we arrived at Askoldov’s small Moscow apartment for dinner, Sasha welcomed us in his courtly style. The apartment was lined with books, framed photos and film posters; the walls left visible were covered with a lovely fading Victorian print. Svetlana had prepared an amazing spread of dinner (yes, amazing, because food was still hard to come by at the time) completed with homemade honey cakes and vodka, served on a lace tablecloth. We talked about how impossible and miraculous it was that we had produced a Jewish Film Festival there, how people in the West admired Gorbachev while people in Russia cynically laughed at him, distrustful of what the future might bring. As we said goodnight hours and many toasts later, he gave me an album of the Russian composer Alfred Schnittke whose work was the unforgettable score for COMMISSAR.

Our Jewish Film Festival in Moscow had been one small tremblor in the oncoming earthquake that shook the state to its core. Sooner than we knew, the entire Communist enterprise would be completely transformed, and Askoldov would leave Moscow to build a new life in exile. We met next in Berlin where he and Svetlana had moved. I was again traveling with my colleague Janis Plotkin, this time to scout new films at the Berlin Film Festival. It was only a year or two after the wall had come down, and already there were plans for a Starbucks at the Brandenburg Gate across from the Reichstag in formerly Communist East Berlin. Janis and I met up with Sasha and Svetlana at the Kranzler Café on the Kurfurstendamm. The Askoldov who had been urbane in San Francisco, cultivated in Moscow, was now sorrowful in Berlin. Though he had family, and part time work teaching, this great filmmaker was still not able to make another movie. It was as if his integrity and talent were too much for this world, a world that would soon usher in Putin and Trump that would mirror the extremes of nationalist violence and small pockets of humanism that he brilliantly evoked in COMMISSAR.

Askoldov – both his life and work – remains an inspiration to me, but a generation after the credits have rolled on his masterwork, he is also a dark reminder of the crushing effects of authoritarianism on one man’s life.

Deborah Kaufman produced and directed, with her partner Alan Snitow, COMPANY TOWN (PBS WORLD 2017), BETWEEN TWO WORLDS (2012), THIRST (PBS POV 2004), SECRETS OF SILICON VALLEY (PBS Independent Lens, 2001), and BLACKS AND JEWS (PBS POV 1997). Trailers and more information about these films can be found at Snitow Kaufman Productions. Prior to her film work, she was the founder and Director for 13 years of the San Francisco Jewish Film Festival, the first and largest independent Jewish film showcase in the world. Kaufman has been a Board member of the California Council for the Humanities, Amnesty International USA, and the New Israel Fund. She has been a consultant, programmer, lecturer, and activist with a variety of human rights, multicultural and media arts organizations. Kaufman is a graduate of University of California Hastings College of the Law and a member of the California Bar.

John Fidler writes about THE COMMISSAR in Senses of Cinema.

Read Marat Grinberg’s book for a thorough investigation of the film and its history.

YOU CAN WATCH THE COMPLETE FILM HERE 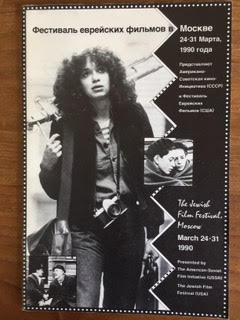 Olga Carlisle wrote about the 1990 Jewish Film Festival in Moscow in the New York Times as did Michael Parks for the Los Angeles Times.