The Art of Rube Goldberg at the Contemporary Jewish Museum on San Francisco through Friday, July 8.

This is a “do-not-miss” exhibit if you like humor and laughter, inventions, cartoons, early cinema and a good time.

(Look for our terrific collection of video clips and shorts below)

“The exhibition begins with Goldberg’s groundbreaking early work— much of it created when he lived in San Francisco— with original drawings tracing his rise to prominence as a nationally syndicated presence in the 1920s and 1930s. Highlights include one of Goldberg’s earliest existing drawings, “The Old Violinist,” from 1895, an original concept drawing of Boob McNutt and Bertha from the 1920s, as well as original artwork for such daily and weekly comic strip series as Foolish Questions, Mike and Ike—They Look Alike, Lala Palooza, and Boob McNutt from the 1910s and 1920s. The influence of vaudeville, jazz, and early film on Goldberg’s art is explored while his satirical take on fashion, sports, politics, gender roles, and other aspects of modern life is celebrated. Rare family photographs and early films provide period detail and essential context. Three full-page comics from the color supplements of Sunday newspapers) are shown alongside the original artwork.

At the center of The Art of Rube Goldberg is a section dedicated to his invention drawings. Showcasing over thirty original drawings, this section explores the development of these iconic inventions—overly complicated chain-reaction machines designed to perform simple tasks—from their first appearance in 1912 to the emergence of Goldberg’s mature style in “The Inventions of Professor Lucifer G. Butts, A.K.,” which appeared in Collier’s magazine from 1929–1931. His zany contraptions function, as he put it, as a “symbol of man’s capacity for exerting maximum effort to achieve minimal results” and made him a popular cultural icon.” 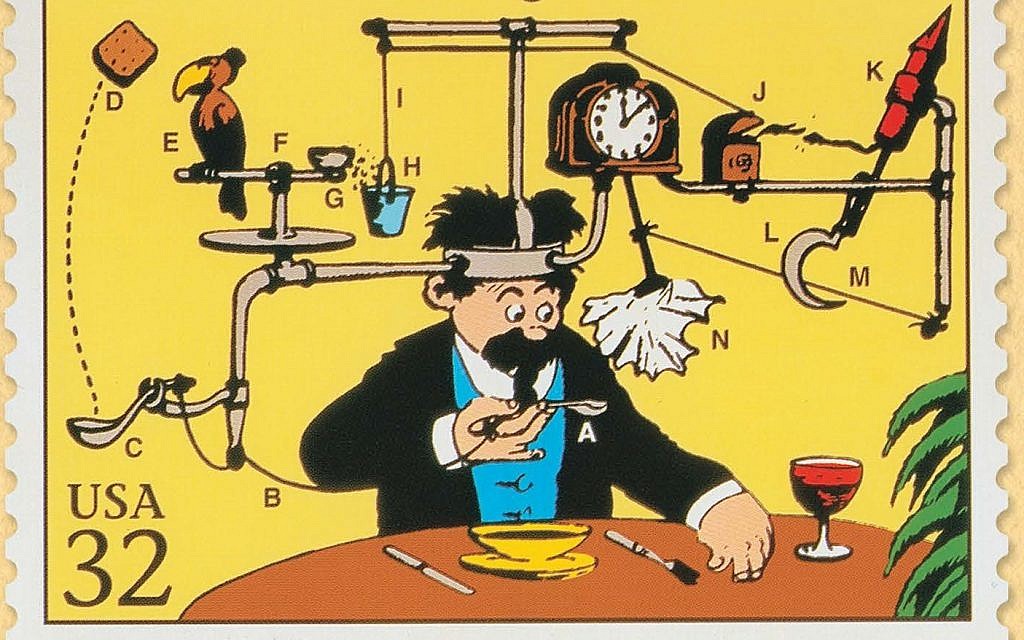 There are a series of video interviews with family members, the curator and visitors.

To really take this all in, one should prepare to spend about two hours to read and enjoy them many works as well as additional films and displays.  Maybe break your visit up and have lunch in the Wise Sons Jewish Delicatessen in the the museum The Rube Goldberg inventions are certainly his most well-known and lasting contribution but I must say the “Foolish Questions” cartoons were a special revelation and very funny.

This industrial film for Jam Handy is a rare chance to see Rube Goldberg in action. Looses its punch as it goes but worth a start.

Goldberg wrote the story and dialogue for SOUP TO NUTS (1930) featuring Ted Healy and the Three Stooges.  Most of the film is boring but here is a sequence of Rube’s inventions in action.

Many feature films have had Rube Goldberg inspired sequences  such as PEE WEE’S BIG ADVENTURE, THE GOONIES, MODERN TIMES, AMELIE, MALCOLM and BACK TO THE FUTURE to name a few.

But it is the short filmmakers who have been doing the great work.

This selection of Wallace & Gromit’s Crackling Contraptions should delight you.

The classic is THE WAY THINGS GO (1988). For some reason this sometimes seems to start just as it start to repeat part of the film and you may have to pull it back to the start. The film runs 29 minutes and can be purchased on streaming or DVD for much higher quality.

The great, little known Charley Bowers surely was as inventive as Goldberg working in the late 1920s and early ’30s. WE urge you to consider buying the complete collection with English subtitles. You want the Lobster version as it has an extra film and can be purchased from Amazon or Lobster in France. The shorter American version is out of print and highly priced.

We recently discovered Joseph’s Machines.  Here are two of our favorites.

Not in the exhibit but appropriate for a Jewish Museum.

Ray and Charles Eames designed the DO-NOTHING SOLAR MACHINE in 1957.

Learn more about the Rube Goldberg Machine Contest and other winners.

And finally we can suggest Pythagora Switch videos. Many more can be found online.