On the 100th birthday of Sweden’s most famous film director Ingmar Bergman, Berkeley Art Museum/Pacific Film Archive is presenting three programs of films. One program, The Early Years, is screening five of his 1940s works in Theater 2 or the “salon,” the much smaller room downstairs that’s previously been used for film and video installations. This series is the first to use the smaller venue and will be an appropriately intimate space for these works.

Viewers more familiar with Bergman’s later works will find this series a revelation. I should have known, but didn’t, that he went through a lot of stylistic experimentation in the post-World War II era. Here are echoes of German Expressionism, Duvivier (whose career Bergman once said he wished he had), Clair, Carné, Rossellini, even Hitchcock . . . he played with the very best.

A visit to the first (and sold-out) Bergman screening met with my approval. Theater 2 is a cozy miniature of the 232-seat Barbro Osher Theater, alas minus the 35-millimeter projection—so I know some digitalphobes who will never set foot in there. Both rooms have an overly-bright EXIT light and latecomers show up in viewers’ sightlines, but those problems  fade once I’m engrossed in the film. Make sure you give enough time to wait for the doors to open in the adjacent Koret Reading Room–there are only 29 seats. 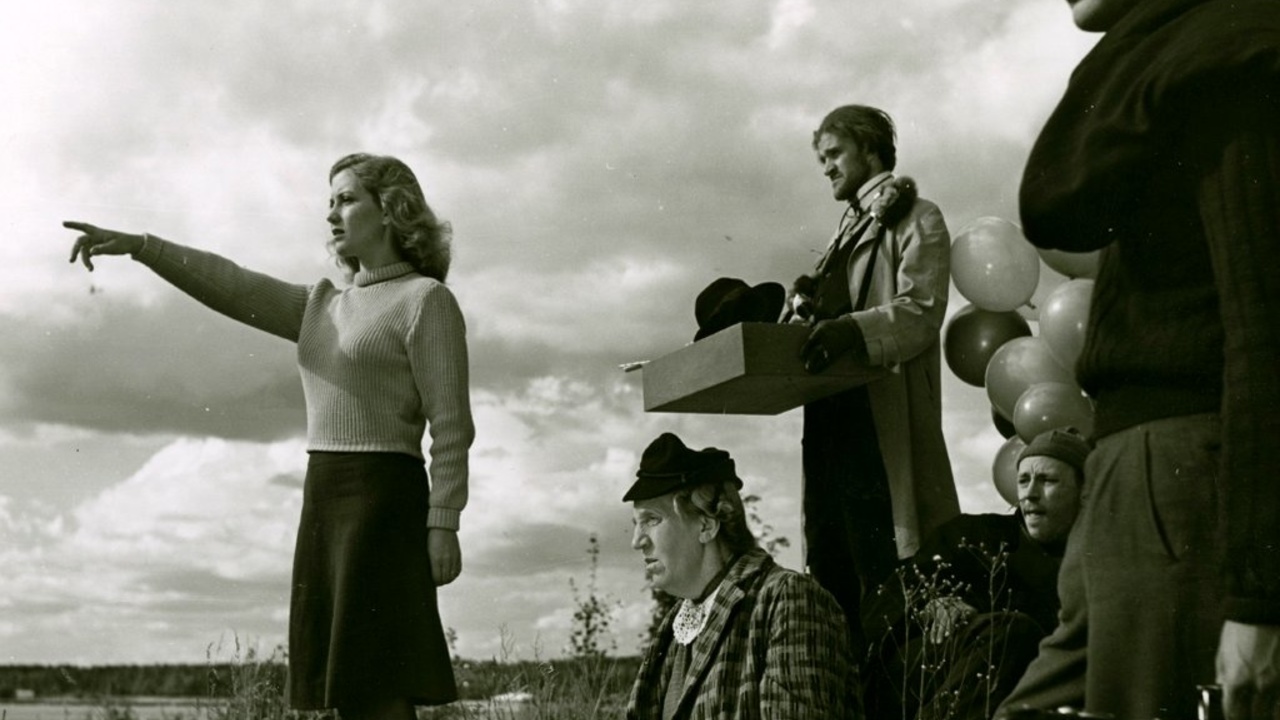 It Rains Our Love

Those who saw Bergman’s third film It Rains on Our Love (1946) in mid-March might recall some of the clunkier devices, like a narrator who speaks to the camera and walks among the characters, the lame “comic” pedlar duo and henpecked husband or the sententious court verdict. But that verdict warmly champions a young couple who have gone astray yet are trying to re-integrate into proper society. They’ve done things punishable by death in a Hollywood film, yet here they challenge bureaucratic priests and prissy government officials, one played by Gunnar Björnstrand, whom we’re used to seeing in a much sterner register.

Crisis (released in the U.S. as A Young Girl’s Troubles)

Bergman’s feature directing debut is the 1946 Crisis, darker than Stella Dallas or even Mildred Pierce in the pantheon of mother-daughter melodramas. After a modest small-town upbringing by a piano teacher, naïve young Nelly is troubled by a visit from her big-city mother Jenny, who brings along dissolute lover Jack (their names and questionable pasts carry a whiff of The Threepenny Opera, which Bergman staged in 1950). Nelly is thrilled to wear the more glamorous dress brought by her mother and is awed by Jack’s tragic and mysterious stories of his “moonlit life.” Joining them in Stockholm, she witnesses their sleazy existence and seems headed for oblivion herself—especially in a bizarre, shadowy climactic sequence shot among disembodied hair-salon heads and the applause and laughter from a theater next door. (Screens Friday, April 6v and Sunday, April 8)

Music in the Dark (released in the U.S. as The Night is My Future)

Bergman stages a number of surreal Expressionist sequences in these films—fantasies, dreams and mystery interludes. In his 1948 Music in the Dark, handsome upper-class Bengt is blinded trying to save a puppy during a live-fire drill. His agony is depicted as a hammer banging on an anvil, then himself being pulled into a boiling swamp, then floating up in a goldfish tank. His socialite girlfriend returns his ring, but when the embittered Bengt is asked to play the organ at the funeral of the father of a young maidservant in his aunt’s house, he is drawn to her. Full of life and a thirst for knowledge despite her low status, Ingrid takes Bengt out to re-engage with the world. Like It Rains on Our Love, Music in the Dark roots for a young couple with disadvantages. But this time the deficits are not poor past decisions but circumstances beyond their control, like class disparities and disability. I don’t know enough about Bergman’s Hollywood moviegoing life to know if he saw the 1945 Pride of the Marines, starring John Garfield as a blinded soldier whose zest for life is also restored by the woman he loves.(Screens Friday, April 20 and Sunday, April 22)

The moody, sensitive actor Birger Malmsten stars in four of these films. During this period, according to the Swedish centennial website Bergman 100, he “was the closest of any actors to play Bergman’s alter ego in film. His gloomy, fierce, quavering aura and intense gaze became synonymous with the image of the restless post-war young man, apparently drifting aimlessly yet with an intense longing for something other than his current predicament.” 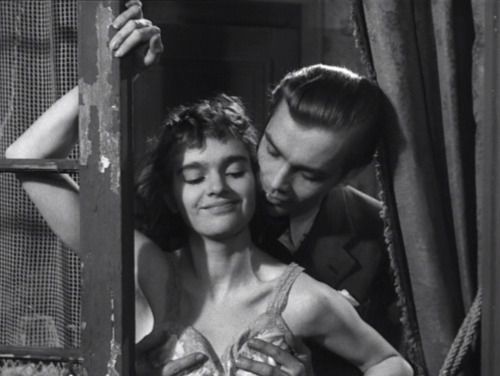 Thirst (released in the U.S. as Three Strange Loves)

My favorite in this series is the 1949 Thirst, which combines Neo-Realist themes with his own later preoccupations about men and women, in a diptych narrative structure that would be right at home in the 21st century.

At Midsummer, a tempestuous couple are on the train home from an Italy vacation beyond their means. She constantly bewails her dancing career ended by injury, and he feels cursed to minister to “hysterical women.”

Both are haunted by past affairs, one depicted in flashback. This storyline is cross-cut with another whose connection is gradually revealed and is more tragic, involving a manipulative psychologist and an unrequited lesbian love.

The Bergman Early Years series lets us see the auteur juggling styles and themes while establishing a foothold in conventional Swedish cinema. But the soul-gazing torment that dominates his mature films is clearly showing through here, as a husband (played by Malmsten) says to his wife: “I don’t want to be alone and independent . . . that’s worse than the hell we’re in.”

For more information on the entire series, visit Bergman 100: The Silence of God

riter and contributing editor to Documentary.org. She teaches film history and ethnic studies at California State University East Bay and Diablo Valley College. She doesn’t like anyone messing with her assigned seat at the Pacific Film Archive. Frako has written for EatDrinkFilms about Japanese film master director Kenji Mizoguchi and Polish animation. Her Twitter page is a good way to keep up with her current writings.