A guide to cinematic exhibits on the east coast.

Because of my interest in magic and spook shows, I was drawn to this exhibit that is only marginally about the movies but anyone interested in showmanship will be fascinated by this collection of ephemera about fake spiritualists, séances, Arthur Conan Doyle’s relation with Houdini and a host of eccentrics.

Unfortunately the accompanying 90 minute immersive film was down for repair but is now back up and my visit to NYC in November will include a return to experience it.

“Tony Oursler’s Imponderable (2015-16) offers an alternative depiction of modernism that reveals the intersection of technological advancements and occult phenomena over the last two centuries. Presented in a “5-D” cinematic environment utilizing a contemporary form of Pepper’s ghost-a 19th-century phantasmagoric device-and a range of sensory effects (scents, vibrations, etc.), Imponderable is an immersive feature-length film inspired by Oursler’s own archive of ephemera relating to stage magic, spirit photography, pseudoscience, telekinesis, and other manifestations of the paranormal. Drawing on these objects, Imponderable weaves together a social, spiritual, and empirical history of the virtual image that overlaps with the artist’s own family history. A cast of characters including Sir Arthur Conan Doyle, Harry Houdini, Mina “Margery” Crandon, and members of Oursler’s family are portrayed by an eclectic ensemble of artists, musicians, and performers including Kim Gordon, Jim Fletcher, Keith Sanborn, and Constance DeJong. Bringing together Oursler’s ongoing interest in mysticism, psychedelia, popular culture, and media history, the work employs macabre humor and theatrical surrealism to reflect on the irrational relationship between belief systems and the authenticity of images. Imponderable is presented in conjunction with selections from Oursler’s archive relating to the film.”

This exhibition coincides with Tony Oursler: The Imponderable Archive, on view at the Center for Curatorial Studies, Bard College, Annandale-on-Hudson, New York, through Sunday, October 30, 2016.

“Imponderable Archive is an extensive research project, exhibition, film, and publication that investigates the personal collection of American artist Tony Oursler, a remarkable trove of more than 2,500 photographs, documents, publications, and unique objects, tracking a social, spiritual, and intellectual history dating back to the early eighteenth century. The actual objects within the archive will be shown for the first time in this comprehensive exhibition.”

MAKING FACES: IMAGES OF EXPLOITATION AND EMPOWERMENT IN CINEMA 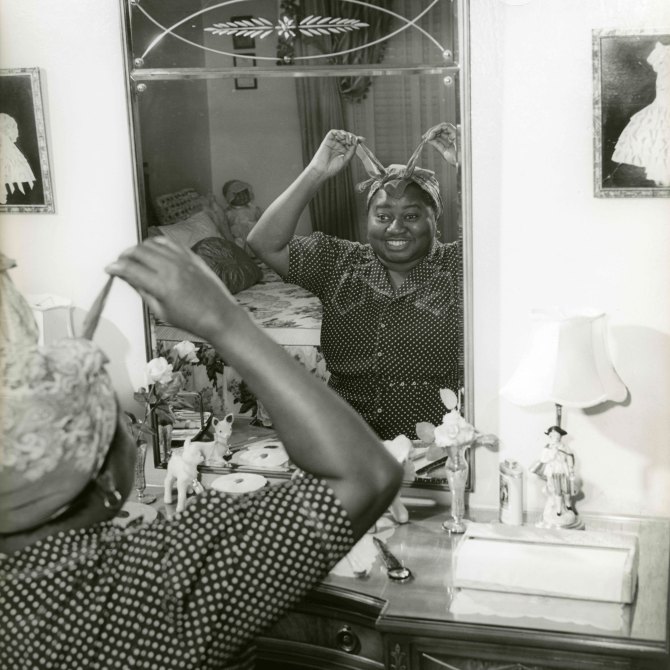 This selection of photos offers at times uncomfortable juxtapositions of iconic stereotypes from classic movies to the explosion of Black action genre films in the 1970s, resulting in a thought-provoking reevaluation of the images we grew up seeing and the ways they had a very different effect they had on Black and non-Black audiences not to mention images of Latino, Asian and women offered in smaller numbers. Located in the MoMA theater lobby it is a small show easily viewed while waiting for a movie.

“Making Faces presents a selection of images from the Department of Film’s extensive collection of film stills that explore the representation of historical “otherness” onscreen. This exhibition examines the attempts of commercial film studios to aestheticize identity at various historical moments. Photographic enlargements capture both conscious and unconscious deviations from cultural, social, racial, and gender expectations from the silent era through the Blaxploitation films of the 1970s.”

All of the current exhibitions are moving image related.

“Over the past thirty years, Rist (b. 1962) has achieved international renown as a pioneer of video art and multimedia installations. Her mesmerizing works envelop viewers in sensual, vibrantly colored kaleidoscopic projections that fuse the natural world with the technological sublime. Referring to her art as a “glorification of the wonder of evolution,” Rist maintains a deep sense of curiosity that pervades her explorations of physical and psychological experiences. Her works bring viewers into unexpected, all-consuming encounters with the textures, forms, and functions of the living universe around us.

Occupying the three main floors of the Museum, Pipilotti Rist: Pixel Forest is the most comprehensive presentation of Rist’s work in New York to date. It includes work spanning the artist’s entire career, from her early single-channel videos of the 1980s, which explore the representation of the female body in popular culture, to her recent expansive video installations, which transform architectural spaces into massive dreamlike environments enhanced by hypnotic musical scores. Featuring a new installation created specifically for this presentation, the exhibition also reveals connections between the development of Rist’s art and the evolution of contemporary technologies. Ranging from the television monitor to the cinema screen, and from the intimacy of the smartphone to the communal experience of immersive images and soundscapes, this survey charts the ways in which Rist’s work fuses the biological with the electronic in the ecstasy of communication.”

“Dreamlands: Immersive Cinema and Art, 1905–2016 focuses on the ways in which artists have dismantled and reassembled the conventions of cinema—screen, projection, darkness—to create new experiences of the moving image. The exhibition will fill the Museum’s 18,000-square-foot fifth-floor galleries, and will include a film series in the third-floor theater.

The exhibition’s title refers to the science fiction writer H.P. Lovecraft’s alternate fictional dimension, whose terrain of cities, forests, mountains, and an underworld can be visited only through dreams. Similarly, the spaces in Dreamlands will connect different historical moments of cinematic experimentation, creating a story that unfolds across a series of immersive spaces.

It will be the most technologically complex project mounted in the Whitney’s new building to date, embracing a wide range of moving image techniques, from hand-painted film to the latest digital technologies. The works on view use color, touch, music, spectacle, light, and darkness to confound expectations, flattening space through animation and abstraction, or heightening the illusion of three dimensions.

The artist has recreated the house from Alfred Hitchcock’s Psycho on the roof garden of the Metropolitan Museum. You will see this familiar structure (built using recycled wood from barns) against the skyline of Manhattan and Central Park. Then you walk around it to see it is built just like a movie set house—a series of flat walls held up by scaffolding. Selfie time.

“A large-scale sculpture by acclaimed British artist Cornelia Parker, inspired by the paintings of Edward Hopper and by two emblems of American architecture—the classic red barn and the Bates family’s sinister mansion from Alfred Hitchcock’s 1960 film Psycho—comprises the fourth annual installation of site-specific works commissioned for The Met’s Iris and B. Gerald Cantor Roof Garden.

Nearly 30 feet high, the sculpture is fabricated from a deconstructed red barn and seems at first to be a genuine house, but is in fact a scaled-down structure consisting of two facades propped up from behind with scaffolding. Simultaneously authentic and illusory, Transitional Object (PsychoBarn) evokes the psychological associations embedded in architectural spaces. It is set atop The Met, high above Central Park—providing an unusual contrast to the Manhattan skyline.”

MUSEUM OF THE MOVING IMAGE

“Museum of the Moving Image is the country’s only museum dedicated to the art, history, technique, and technology of the moving image in all its forms. The Museum is a one-of-a-kind destination for audiences of all ages and interests, from connoisseurs of classic cinema to children and families to avid gamers.

Embracing a wide range of subjects, from nineteenth century optical toys to the latest in digital art, the Museum explores every phase of the production, promotion, and exhibition of moving images. It offers an engaging, highly interactive core exhibition, programs of contemporary and classic films from around the world, discussions with leading figures in film and television, a unique collection, inspiring educational programs for learners of all ages, stimulating changing exhibitions, and groundbreaking online projects.”

“Arcade Classics features more than 30 video arcade games released between 1971 and 1993, drawn from the Museum’s collection. All of the games will be playable. Though the era of the video arcade game is long gone, arcade games were the grounds for innovation and experimentation that informed the genres, conventions, and play mechanics of the video games that we know today.

Contains more than 300 commercials, from every presidential election since 1952, when Madison Avenue advertising executive Rosser Reeves convinced Dwight Eisenhower that short ads played during such popular TV programs as I Love Lucy would reach more voters than any other form of advertising. This innovation had a permanent effect on the way presidential campaigns are run.

To the Moon and Beyond: Graphic Films and the Inception of 2001: A Space Odyssey through Sunday, November 13, 2016.

This exhibition features rarely seen artwork created by Graphic Films for 2001: A Space Odyssey, and correspondence between the company and Stanley Kubrick. It includes more than twenty detailed sketches for a lunar base and space vehicles; correspondence with script and design suggestions and technical advice; as well as an early draft of the script for the film.

Behind the Screen –ongoing

The core exhibition of the Museum, Behind the Screen is a one-of-a-kind experience that immerses visitors in the creative and technical process of producing, promoting, and presenting films, television shows, and digital entertainment. Occupying 15,000 square feet of the Museum’s second and third floors, the exhibition reveals the skills, material resources, and artistic decisions that go into making moving images. Behind the Screen also introduces visitors to the history of the moving image, from nineteenth-century optical toys to the present-day impact of digital tools on film editing and post-production.

The 1960s was a seminal period for the artistic use of the computer in the creation of moving images. From the manipulation of geometric line drawings, to the use of realistic 3-D vector graphics to highly processed psychedelic abstraction, these films were the result of pioneering collaborations between artists, computer programmers, and technicians that anticipate the full integration of cinema with computer imaging. This compilation features a selection of pioneering films by Edward E. Zajac, A. Michael Noll, Charles A. Csuri, James P. Shaffer, Stan VanDerBeek, Kenneth Knowlton, and John and James Whitney. As seen in the adjacent exhibition, To the Moon and Beyond: Graphic Films and the Inception of 2001: A Space Odyssey, the films of John and James Whitney had a strong influence on Stanley Kubrick. 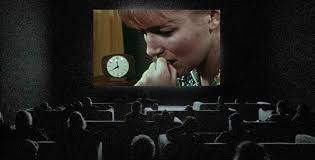 The Clock is a must see 24-hour film made of clips from classic cinema where each scene includes a time piece or other reference to the very moment in time the viewer is watching. It is great fun but also frustrating, as it is unlikely you can see the entire thing without making several visits. Late night through early morning are less frequently shown because most museums can’t stay open around the clock except for specially announced nights. But don’t worry as whatever you see will be exhilarating. There are several clips online (mostly made illicitly via a phone from a visitor to the show) that will give you a sense of the work—try to watch them at the correct time.

An ode to time and cinema, Christian Marclay’s The Clock (2010) is a contemporary masterpiece comprised of thousands of fragments from television and film history—creating a 24-hour video shown in real time. At any given moment, the work displays the accurate time on screen, blurring the line between its fictional clips and reality. Synchronized to the local time zone, The Clock literally becomes a functioning timepiece. Every clip in the film shows a clock, mentions the time of day in the dialogue, or represents a metaphor of time. From Big Ben to Jack Nicholson, viewers can recognize iconic movies, actors, and clips from a century of films.