Custard pies made the news last summer, as a long-lost Laurel & Hardy film, the aptly-named The Battle of the Century (1927), was rediscovered. Containing the legendary double-act’s most extensive pie fight, the movie has been seen only in severely truncated form in recent decades, and the rescued footage is a welcome addition to a filmography whose tantalizing gaps have slowly been disappearing.

The fight itself is a classic, a reminder of how funny and detailed and varied such an activity can be, in the right hands. The first pie is slung by diminutive Charlie Hall, hitting Ollie’s big baby-with-a-tiny-mustache face. The second, Ollie’s retaliatory attempt, goes wide of the mark, according to a long-standing tradition, and explodes over Dorothy Coburn’s shapely ass. She turns to remonstrate and, in accordance with an equally venerable tradition, is hit full in the face by a second crust-load. From here, escalation to total whiteout is as gradual but inevitable as a marital argument or a world war. Soon, an entire street is bustling with gooey combatants, frantically pasting each other with pastries.

The custard cream pie is an iconic movie foodstuff, but one that’s never actually eaten. It has acquired its status purely as a projectile, exploding across a hundred years’ worth of startled comedians’ faces, legendary in the same way as the banana peel or the stray roller skate. It’s hard to think of many examples of its use that are actually hilarious, since the improper use of the pie has ceased to be surprising, so the pie is more a symbol of comedy than an actual example of it.

Keystone, the studio most associated with slapstick, was almost certainly the site of the first custard cream pie thrown in anger. Studio boss Mack Sennett was an inveterate mythmaker, and so he liked to say that the first pie was thrown by Mabel Normand and received by the crossed-eyed kisser of Ben Turpin, but this appears to be one of Sennett’s confabulations. Kalton C. Lahuue and Terry Brewer, in their study of the studio, Kops and Custards: The Legend of Keystone Films (A Book), claim that A Noise from the Deep, released in 1913, contains the earliest sploshing on record, and the recipient is the enormous, cherubic visage of Roscoe “Fatty” Arbuckle, a hard target to miss. Since Arbuckle’s career was derailed by scandal, Sennett seems to have purged him from the record where possible, like a screwball Stalin, substituting a strabismic star who would not join the ranks at Keystone for another four years. 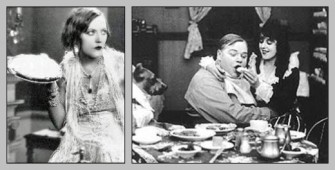 In a 1909 comedy, Mr. Flip, Turpin does get a pie in the face, but it isn’t thrown, merely pressed into position by an irate waitress.

Was Mabel Normand indeed the thrower?

Keystone’s top female star, Sennett’s sometime fiancée, and the woman with a strong claim to discovering Charlie Chaplin for the movies, Normand was an inventive comedian and a talented filmmaker in her own right. All of which was surplus to requirements at Keystone, where what mattered was an ability to deliver or receive as many kicks up the arse or mallet blows to the skull as could be crammed into two reels of nitrate stock at around sixteen frames per second.

But A Noise from the Deep seems to survive only in one rarely-screened print, and some who have seen it identify Arbuckle as the pie-wielder, not the receiver.

In any case, an earlier release from the same year and studio, A Rag Time Band, can claim precedence. Here, the first to get his face redecorated is Keystone stalwart Ford Sterling, victim of forgotten funnyman Raymond Hatton’s deadly aim. Mabel Normand, laughing at the mayhem, becomes the victim of the second pie, which Sterling has flung back with more passion than accuracy.

The obscurity of these examples demonstrates that it was not via a spectacular first appearance that the flying custard made its mark, but by sheer repetition. The pie in the face became a handy addition to the comic arsenal: messy, vulgar, undignified, it not only deflated pomposity, it left it dripping with goo as a bonus. Chaplin threw pies, though he wasn’t averse to knocking the supporting cast’s teeth loose with bricks also. Bags of flour were also popular, since they exploded so satisfyingly on impact. Buster Keaton, fresh to the movies, wondered how to take a bag in the mush without flinching. Arbuckle told him to look away until he heard the signal. “When you turn around, it’ll be there.”

When sound came in, the pie was perhaps seen as a little old-hat. Laurel & Hardy and Charley Chase still produced two-reelers, and still dealt in broad slapstick, but at a less furious pace than Keystone’s. Greater ingenuity was expected in creating comic mayhem (in The Rag Time Band, nobody wondered where the pies came from). The boys had a fabulous free-for-all with the sludge produced when a car radiator is filled with rice, and the action was carefully prepared for by plot. In Modern Times (1936), Chaplin gets pied by a robot, a feeding machine designed to eliminate the lunch break by shoveling food into the proletariat while they work. The more things change… 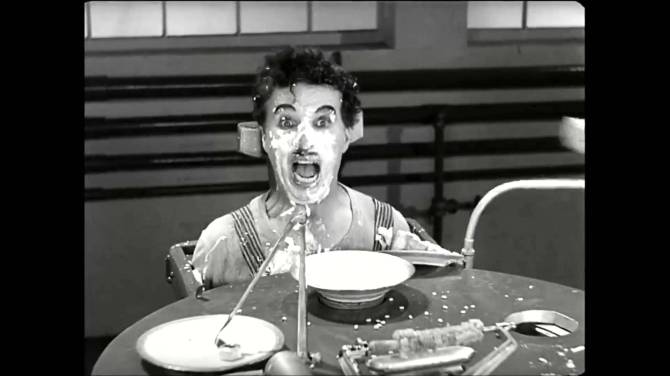 Pies were already a symbol of a more naïve age. Occasional movies like Abbot and Costello Meet the Keystone Kops (1955) would revisit the old gags and give a few days’ work to the old comedians. Then came nostalgia.

The previous year saw – or rather, did not see – a more celebrated battle. The climax of Stanley Kubrick’s Dr. Strangelove, or How I Learned to Stop Worrying and Love the Bomb, was to have been a pitched pie fight in the war room of the pentagon. (The Great Race has two Jack Lemmons getting pelted; Kubrick would have had two Peter Sellerses on hand).

The Monty Python team found fresh mileage in the “precipitation jest” in their Live at the Hollywood Bowl performance film (1982). Like Laurel & Hardy, they slow down the action, gaining humor from predictability rather than surprise, and then throw in a few surprises into the bargain. The whole thing is accompanied by a commentary poking fun at academic analyses of humor (it’s probably the translation, but is there any more wretched text than Freud’s Wit and Its Relation to the Unconscious?)

Anthropologists would get in on the act by comparing pie flinging with the territorial faeces-flinging of apes and monkeys. But a pie is not a poo. The purity of its whiteness on screen, and the delicacy with which it may be handled, makes a pie a more dignified ingredient for a foodfight than, say, a handful of spaghetti. It’s as if the collision of pie with person robs both of a certain pretentiousness: the pie ceases to be a luxurious delicacy and becomes a dripping mess; the person ceases to be whatever station in life they have attained, and also becomes a dripping mess. Kinetic energy as the great leveller.

Pies have also spilled out of the movies, with powerful figures such as Rupert Murdoch and Bill Gates being stalked and splashed. Truly cinematic examples of this form of protest are the opening of the 1969 San Francisco Film Festival, where independent filmmakers in fancy dress creamed the participants, and the pieing of Jean-Luc Godard by Noël Godin at the 1985 Cannes Film Festival. Godard seemed to take the patisserie-insult in good part, intervening to prevent Godin’s arrest, and issuing a typically gnomic and succinct statement: “This is what happens when silent movies meet talking pictures.”

David Cairns is a filmmaker and screenwriter who also moonlights as a critic. His films include the multi-award winning short Cry For Bobo (2001) and the feature documentary Natan (2013). He is co-author of the screenplay for Let Us Prey (2014). His articles have appeared in Sight & Sound, Cineaste, and accompanied DVDs for Stagecoach, The Lost Weekend and Rififi among many others.

His blog is always fascinating as he tells little-known stories about movies and their creators at Shadowplay.

A Cultural History of Pie-ing, From Mr. Flip to Rupert Murdoch – a look at how the pie-in-the-face has evolved from comedic device to political act.

Music journalist Lester Bangs was one of the first writers to champion the rock group The Stooges in a national forum, with his 1970 piece “Of Pop and Pies and Fun” for Creem Magazine where here decided the only true way to judge an artist’s worth is to throw a custard pie in their face. How would they react? Alice Cooper was pied on stage and joyfully rubbed the custard all over his face. He assumed that Iggy Pop would also make the most of it while most big stars such as Led Zeppelin or George Harrison would be disgusted and leave the stage.