(This is the introduction to Mike Kaplan’s book on movie posters with stunning examples. For more details, and to sample the book’s elegant design, visit the website.)

Maybe I was born with a poster gene. As a child in Providence, R.I., I’d remove the full-page theater ads announcing a new play or musical from the Sunday New York Times, color them with paints or pastels and then compare the results with the printed versions when I visited New York with my parents. Though they were not then available for public purchase, movie posters were easily viewed as they were prominently displayed in lobby frames and exterior display cases at every cinema.

I loved movies and movie posters equally and studied both. Whenever a new Otto Preminger film was announced, I would await its opening but would be just as excited anticipating the first look at the film’s poster, for Preminger employed graphic master Saul Bass and Bass’ concepts were always bold, sophisticated and surprising ( i.e. The Man With the Golden Arm, Anatomy of a Murder, Advise and Consent).

Becoming part of the film industry allowed me to collect new film poster favorites. This was still a period when a poster’s key art, along with the trailer, was the main advertising tools in attracting audiences. My mantra was: “a film’s campaign could determine its success and every good film could be a box-office winner if it had the right poster.” But more posters began to look alike, with little imagination and a preponderance of photography, while paintings and illustration, which I believe elevate a film and entice the public, faded from view. The exciting poster work was now being done by the music industry, with ground-breaking imagery from new artists as rock dominated mainstream culture. Album covers became works of art. I wanted the same for movie posters.

Discovering the availability of vintage movie posters through funky memorabilia shops, a new world of striking and lushly provocative poster art was revealed, one that blossomed during “the golden age” of movie poster design (1930-1950). Design was what I responded to, regardless of nationality or whether I knew the film, and I relished finding and being inspired by these treasures from around the world.

Greta Garbo’s name is larger in this German poster by Meiss than in American versions for Grand Hotel because she was so popular in Europe.

In GOTTA DANCE: The Art of the Dance Movie Poster, 101 pieces have been selected from nine nations. All have unique qualities in using dance imagery from both musical and non-musical films. One doesn’t associate Lillian Gish, Greta Garbo, Katherine Hepburn, Norma Shearer, Laurence Olivier, Loretta Young or Laurel & Hardy with dance, but they are in dance mode, on posters from their dramas and comedies. It’s a testament to dance as a unifying medium and an effective way of attracting audiences. Of course, every important dance star is also is the book—from Astaire and Kelly to Caron and Charisse.

“The sharp, spunky granddaddy of all backstage musicals… [Busby Berkeley’s] choreography takes center stage in this stunning Belgian poster, showcasing his dancers atop and within the three-dimensional title treatment. An art deco knockout,” writes Mike Kaplan.

Several designs are great posters for great films – a rare synthesis: the Italian Singing’ in the Rain by Nano; the British Red Shoes; the Belgian 42nd Street. The captivating Astaire-Rogers poster for Carefree has Fred & Ginger in full flight, in formal evening attire, an iconic image we recognize from all their films. 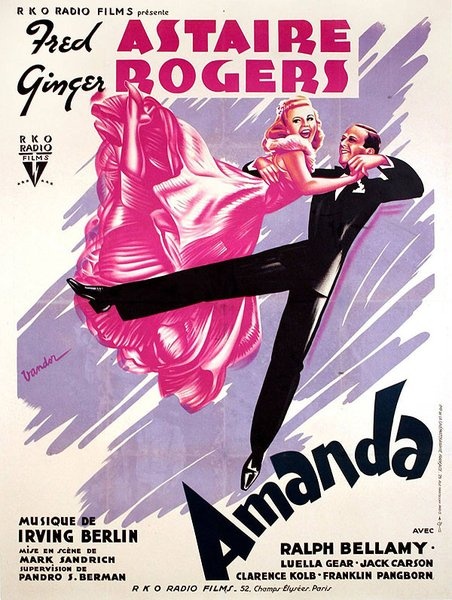 Carefree was changed to Amanda in France with this poster designed by Vandor in 1938.

Other examples of poster perfection include three by Roger Soubie, France’s most prolific movie poster artist, for Born to Dance with a vibrant Eleanor Powell and a young James Stewart, An American in Paris, and Jailhouse Rock, arguably the best Elvis Presley poster with the King and his dancing cellmates; Germany’s Grand Hotel designed by Meiss, with Greta Garbo as the contemplative ballerina and West Side Story; and led by Moje Ashlund’s Bolero, many posters from Sweden where advanced Swedish designs retain a contemporary feeling.

“The posters in every country depict the couple dancing Ravel’s ‘Bolero’ performed in the film atop a circular stage with blinding lights and dramatic shadows, but none reflects the heat generated by Raft and Lombard as much as artist Moje Aslund’s perfect creation of art deco sensuality and elegance.”

The French posters for Kid From Brooklyn with Danny Kaye and a bevy of chorus girls; Astaire and Rita Hayworth pulsate in Boris Grinsson’s design for You’ll Never Get Rich, and Rene Peron devised the ultimate Esther WIlliams aqua feast for Million Dollar Mermaid.

Toulouse-Lautrec inspired Bernard Lancy for the colorful French poster for The Kid From Brooklyn. 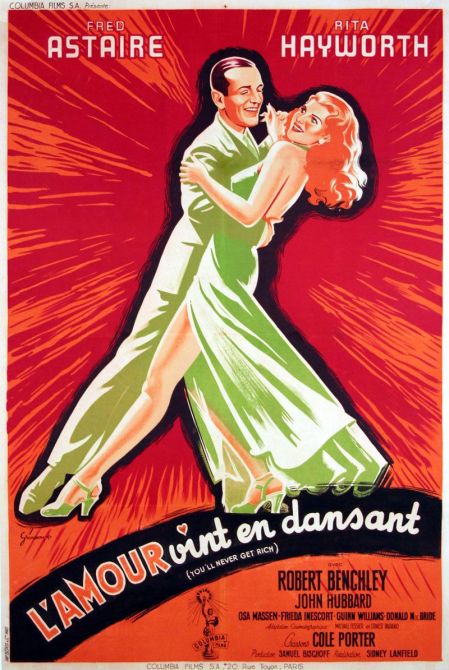 Superb American designs are exemplified by: the elegant Dance Team; the pastel stone lithography of Rudy Vallee, Alice Faye and Jimmy Durante in George White’s Scandals; the art deco Moulin Rouge with sophisticate diva Constance Bennett, then Hollywood’s highest-salaried actress, and Astaire and Rogers on roller skates in Shall We Dance. 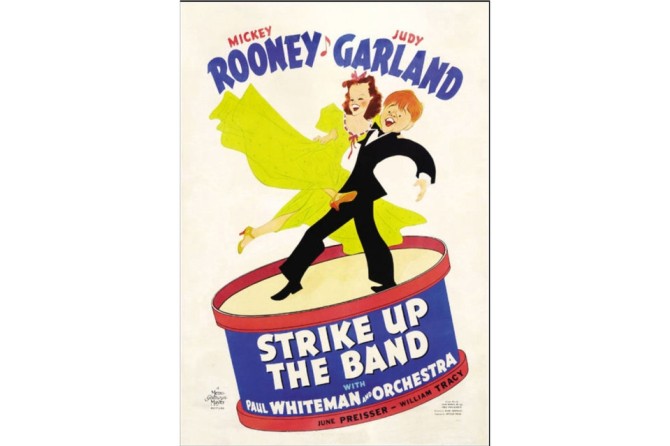 America’s brilliant caricaturist, Al Hirschfeld, drew the unstoppable Mickey Rooney and Judy Garland dancing on a drum for Strike Up the Band. Hirschfeld is one of the few American artists whose poster art was eventually signed. In Europe, where both the poster and the movies were held in higher regard, artists were allowed to sign their work, including Italy’s highly collected Anselmo Ballester, whose Salome of Rita Hayworth in her dance is arguably his masterpiece. 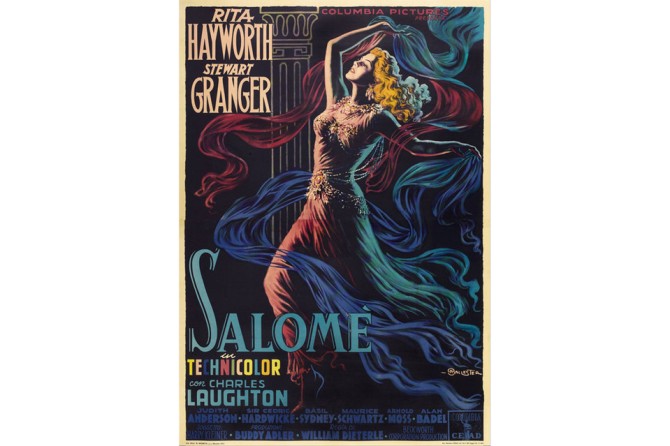 Movie posters have complex and competing elements — text in the form of title treatment, credits and slogans that merge with visuals — a pre-Ed Ruscha construct. With one exception, the “Starchild/ Ultimate Trip” poster that relaunched Stanley Kubrick’s 2001:A Space Odyssey in 1970, every poster took longer to produce than actually making the film. As an independent distributor in London, I delayed the release of Barbet Schroeder’s The Valley (La Vallee) for a year until airbrush maestro Philip Castle perfected his artwork. In many cases examples from the Golden Age inspired new designs — Blonde Crazy (1931) and Suez (1938) for Robert Altman’s Kansas City (1996); Tales of Manhattan (1942) for Alan Rudolph’s Trouble in Mind (1985).

In curating exhibits at the Academy of Motion Picture Arts & Sciences in Los Angeles, the Roy Furham Gallery in Lincoln Center, The Gallery of Film Poster Art at Cal State, Northridge, The California Heritage Museum and Jacob’s Pillow— the mecca of dance, where this book was published to celebrate Marge Champion’s 95th birthday — and in this book, I’ve tried to combine film history and poster history, personal observation and critical thought.

“I love how the inverted triangle of the credits is reflected on the pink platform the jubilant Shirley Temple is standing on. I like the playful ‘kid’ fonts. This poster for Poor Little Rich Girl was by the great French poster artist David Olere.”

My hope is that the movie poster will be recognized as a genuine art form, not a sidebar of popular culture, and that perhaps, painting and illustration, which I believe elevate a campaign, may once again become part of today’s movie poster mix. What’s been revealing at the Gotta Dance! exhibits is that the public has responded to the art of the posters, unconcerned if they cost two figures or five. [Ed. note: No Gotta Dance! exhibit is currently scheduled for the Bay Area.]

A few years ago, the Odeon Cinema Circuit in Great Britain conducted a poll among their patrons to select the All-Time Best Film Poster. I was gratified that one I collaborated on, Stanley Kubrick’s A Clockwork Orange, topped their list. But picking “The Best” of anything is only an exercise.

Robert Altman often said, “My movies are like my children. I love them equally, regardless of their success.”

In GOTTA DANCE!, each piece is a favorite as I remember the excitement of the hunt for the acquisition, the exhilaration in discovering a knockout design, the surprise in learning an unexpected aspect of movie history.

The ideal movie poster is a microcosm of the movie itself, capturing with inventiveness the feeling one has after leaving the cinema. It should be both a work of art and a souvenir of one’s movie experience.

Gotta Dance: The Art of the Dance Movie Poster is available at www.LAGOONPRESS.com in a limited edition. The book is also for sale at MOMA in New York and the Los Angeles County Museum of Art, plus a handful of independent bookstores around the country.

Mike Kaplan has been collecting movie posters for over 35 years during his wide-ranging experience in the creative areas of production, marketing and distribution offers a unique perspective on the motion picture industry.

Kaplan’s writings have appeared in The Guardian, The Huffington Post, The New York Times, The Los Angeles Times and Film Comment. He began his career as associate editor and film critic for The Independent Film Journal.