[John Huston’s film version of Hammett’s The Maltese Falcon celebrates its 75th anniversary this year. Turner Classic Movies presents screenings Feb. 21 and 24 at theaters around the country. For more, click here and for the line-up of TCM Big Screen Classics.  And, as is our policy, look for extras after the article-ed.]

The first time I walked into Sam Spade’s apartment I thought my head would explode.

The building itself, 891 Post Street, was designated on that day in 2005 as a literary landmark by the American Library Association. Assembled devotees of The Maltese Falcon were granted access to Apt. 401 by its tenant, William P. Arney, a man of humor and taste and, most crucially, profound loyalty. He’d occupied the northwest fourth-floor corner for more than 12 years — essentially holding the fort for the apartment’s one-time resident, Dashiell Hammett.

Entering the place, I felt an immense pressure, as if the breadth and gravity of the preceding 75 years were rapidly being funneled into my brain. Such a surge of psychic intensity had hit me only once before: when I stood in the Sun Records studio where Elvis made his first recordings. Triggering this fresh brain-quake was the realization that Hammett’s apartment was also Spade’s, precisely as it’s rendered in the novel — the bend in the entryway, the cubbyhole for the stick telephone, the bathroom as described in Chapter 19 (“The Russian’s Hand”), where Sam makes Brigid O’Shaughnessy strip off her clothes to prove she hasn’t palmed the missing G-note. The tiled bath is adjacent to a single spartan room, which is either the living room or the bedroom depending on whether the Murphy bed is up or down. This is where Hammett’s most famous novel climaxes, where Casper Gutman, Joel Cairo, Wilmer Cook, Brigid and Sam steam up the windows while manipulating and deceiving and betraying each other. This is where the rara avis proves to be a fake.

The place is so small there’s no doubt where Hammett kept his desk. The only viable spot is the room’s southwest corner, overlooking Hyde Street. Here is where Hammett changed the pace and tone and character of American fiction — in the same spot I’m now writing these words — by drafting the manuscripts of Red Harvest, The Dain Curse and The Maltese Falcon.

He’s lurking here still, for those receptive to his spirit. I’m not a big believer in ghosts — but Hammett cast such a long shadow, influencing all crime fiction to follow — that you can’t help but feel his presence in this incubator. I see him now, bundling up the Falcon’s first draft for Editor Harry Block at Alfred Knopf, and sauntering to the post office to ship it off to New York. Imagine how he must have felt, stopping on the walk home to buy some smokes and coffee, a fresh bottle, a new ribbon — breathing in the cool, foggy air off the ocean, fully filled with the satisfaction of a job well done. He’d created something utterly new, rendered with impeccable élan and the impact of a short left hook. Riding the cage elevator back up to his room, he surely knew he was the right man for the job. The only man, truly. 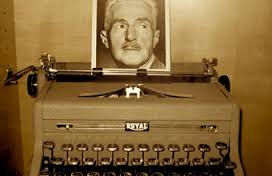 Hammett wrote prodigiously in this garret because he believed he was living on borrowed time. He’d quarantined himself on doctor’s orders, to avoid infecting his wife and child with the tuberculosis he’d contracted during the war years. But instead of withering here, he recovered, the vitality of his creative power obliterating the illness. What he conjured at this desk fortified his regal but ravaged body for a few more decades, years he never expected to have.

Hammett left San Francisco in October 1929. There’s no reason to assume he ever looked back. Fame awaited in New York and Hollywood, as did a small fortune he’d quickly spend on booze, gambling, and obligations to his family that he never forfeited. This room, and the creative ferment born here, came years before the blissful isolation of WWII military service in the Aleutians, before the hollow darkness of HUAC’s chambers and the humiliation of a Kentucky prison cell, before his romanticized servitude to Lillian Hellman. By then the writing was mostly behind him, The Glass Key and The Thin Man having come back-to-back before Prohibition had even ended. As an author, Hammett’s most fruitful days and nights were spent right here, in a space just big enough for writing, reading, dreaming.

Hammett worked as a Pinkerton operative at the Flood Building, 870 Market Street.

Hammett surely couldn’t have imagined he’d become synonymous with San Francisco. He lived here for only a fraction of his 66 years, fewer than three spent in this apartment. Yet the city claims him now as its favorite literary son. Perhaps it’s because Hammett treated this town the way Spade treated Brigid — amused by her tall tales, enticed by her allure, seduced by her romantic desperation — only to strip her bare, coldly revealing the psychic wounds beneath the petulant and perfumed façade. 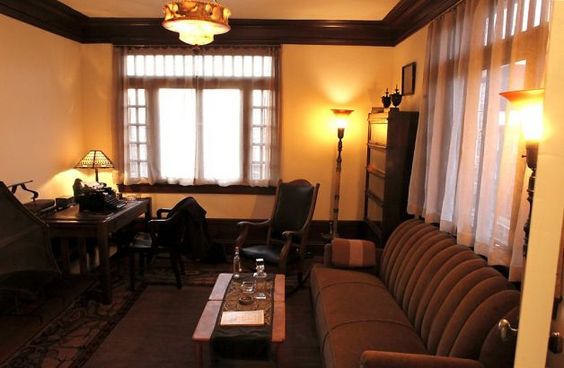 The view up here is pretty much as it was in 1928. Above street level, the brick facings, bay windows and iron fire escapes of neighboring buildings are now nearly a century old. You can’t see the ocean, but you can sense its vast expanse to the west, where the setting sun casts gorgeous golden light through these sheer curtains. When Hammett rose to stretch his lanky frame, gazing down to contemplate the ramble on Post and Hyde, the junkies and whores were far less voluble than now. Street-screaming, skirmishes and sirens are a constant sonic backdrop in the neighborhood these days — one of the reasons Bill Arney no longer lives here. He had to drop the Hammett torch in 2009 after his bride expressed a strong preference for the sunnier and safer environs of San Rafael, across the bay. By then Arney had become my friend and colleague, providing “The Voice” of my annual Noir City film festivals. He confided to me his fear that no new tenant would understand or appreciate the significance of Apt. 401. 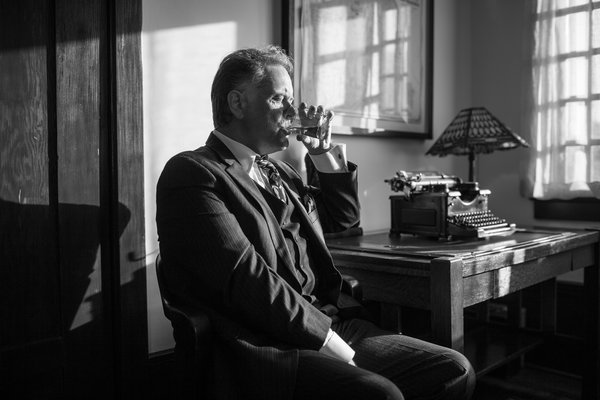 So I contacted another friend and colleague, Robert Mailer Anderson, and we arranged a séance — with spirits. A novelist of note and philanthropist of the first order, Robert was someone who could appreciate the history of Apt. 401. “This is all any writer truly needs,” he declared, surveying the simple space as he pulled the cork on a bottle of Prohibition-era bourbon he’d brought along to properly toast the room’s former resident. By the time Robert, Bill and I had siphoned the bottle — with a shot set aside for Hammett — Robert had agreed to assume the lease and maintain the legacy. Being a man of means, he even underwrote the restoration of the place to its original 1929 state.

Sitting here in the lengthening shadows of evening, the sound of the street rabble rising as darkness descends, it’s easy to believe Dash has just stepped out for a fresh pack of Fatimas. He’ll be back any minute, and the typewriter will resume its glorious staccato deep into the night, and when he’s finished no one will ever think of 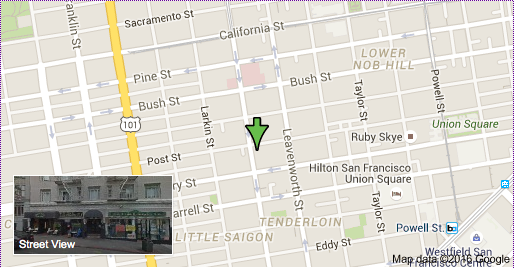 San Francisco in the same way, ever again.

This poor tubercular wretch, so sick he can’t hold a steady job, will literarily own this town.

Eddie Muller is a writer, filmmaker, and noted noir historian. His books include Dark City: The Lost World of Film Noir; Dark City Dames: The Wicked Women of Film Noir; and The Art of Noir: Posters and Graphics from the Classic Film Noir Era. He has recorded numerous audio commentaries for DVD reissues of classic noir films. Muller’s crime fiction debut,  The Distance, was named “Best First Novel” of 2002 by the Private Eye Writers of America. He is co-author of the bestseller  Tab Hunter Confidential. Find Eddie Muller and Noir City at EddieMiller.com. 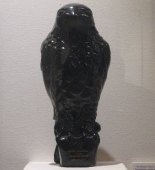 See and pose for selfies with the Maltese Falcon in the lobby of the Flood Building, 870 Market Street, San Francisco. It’s probably not one of the Falcons used in the film, but is more likely a replica produced by the studio for display in theater lobbies.

Read Michael Sragow’s excellent piece about The Maltese Falcon on the Library of America’s new site “The Moviegoer.”

See the original trailer for The Maltese Falcon

Enjoy a four-part BBC dramatization of The Maltese Falcon.