In a matter of five days the Golden Globes gave some pretty strange awards, winners gave drunken speeches and the Academy announced the Oscar nominations with some overlap and surprises. The surprises were often in what was left out. We have asked filmmakers and other movie experts to offer their thoughts on what is missing. 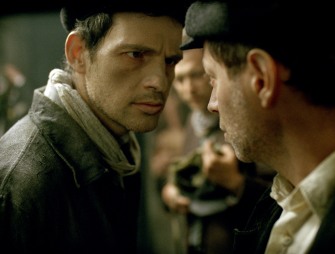 One movie that won a Globe and is considered a favorite to take the Best Foreign Film award is Son of Saul opening this week. Author, interviewer and Columbia film professor Annette Insdorf joins attorney turned film critic Len Weiler to offer their perspectives on the powerful film.

Bay Area mystery writer Gigi Pandian is also a chef who selected a chapter from her latest book plus tells us how to make two delicious treats.

Sunday, January 17 is Hot Buttered Rum Day and Risa Nye delves into the world of this exotic drink with some history and two very different versions for you to make.

Also this weekend, for those living in the San Francisco Bay Area, is the 20th Berlin & Beyond Film Festival. But you can live anywhere to enjoy this week’s Eat My Shorts with works by filmmakers presenting features at the Festival.