Scan the credits of some of the best-known comedy films of the silent era and one name appears again and again: Clyde Bruckman. Those who pay close attention to early film comedy saw his name as gag man on Buster Keaton’s early features, and co-director on what present-day critics consider his greatest film, The General (1926).

Bruckman also directed a handful of early seminal Laurel and Hardy films in which they perfected their screen personas: Putting Pants On Philip (1927), The Battle of the Century (1927) and Leave ’Em Laughing (1928). He would write and direct films with Harold Lloyd as well as work with W. C. Fields and The Three Stooges, and Abbott & Costello on their early ’50s TV show.

That’s almost every important film comedian of the first half of the century. You might expect such a central figure in film comedy to be better known.

What’s unclear is how much Bruckman actually contributed to his impressive list of credits, especially when the later ones – most notably after the industry struggled with the transition of sound in the ’30s – are derivative of his early work rather than original or new, and are generally sloppy. Bruckman’s early works are the enduring ones, yet we know Keaton tended to share director credit with the gag man he happened to be drinking with at the time, and comics such as Laurel and Hardy and Fields were best left to their own devices. Writing for the Stooges or recycling vaudeville gags for Abbott and Costello doesn’t particularly demonstrate a true mastery of anyone’s craft, regardless of his pedigree. 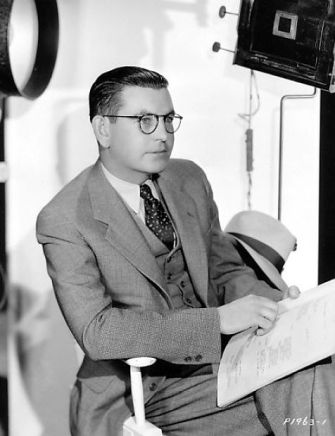 Following F. Scott Fitzgerald’s suggestion that “there are no second acts in American life,” Bruckman’s precipitous rise preceded an irreversible fall of fortune he’d never recover from. Bruckman’s legacy was marred by a plagiarism suit brought by Harold Lloyd in which Bruckman was found to have stolen and reused gags from Lloyd’s films, some of which Bruckman himself had written for Lloyd. In 1955, depressed and alcoholic, Bruckman committed suicide in the restroom of a Santa Monica restaurant, leaving a typed note regarding the return of his car keys and the gun he’d borrowed to shoot himself.

In the same way Hollywood all but forgets its precedents, the history books subsequently had little sympathy for Bruckman or what his death symbolized or portended. He became a footnote of the Hollywood Babylon variety and Matthew Dessem’s deeply researched new book – The Gag Man: Clyde Bruckman and the Birth of Film Comedy from The Critical Press (via Amazon or Indiebound) – attempts, after 60 years, to write the true history for the first time, teasing to light information regarding this footnote to 20th-century film comedy.

Dessem originally wrote on Bruckman in a 5000-word article for The Dissolve; this book-length expansion unearths more credits, plotlines and personal details. It traces his movement among studios, and his work on dozens of projects, most of which no longer exist or were never completed. Dessem has trade reviews and the recently digitized archive of Daily Variety at his disposal, a previously hidden but prodigious paper trail from an age before IMDB and the 24-hour celebrity cycle.

The story leads inexorably, without Dessem offering much armchair psychoanalyzing, to that restaurant bathroom. Bruckman seemed to have been a beneficiary – or the victim – of being at the right place at the right time. Keaton was attracted to him initially because of Bruckman’s early career as a sportswriter and ballplayer. Keaton played baseball with his collaborators during offtimes, and didn’t take the assigning of credits very seriously; he’d let his closest gag man “co-direct” him when he was in front of the camera instead of behind it. 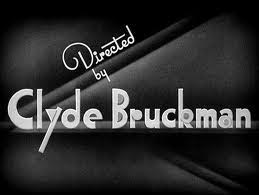 The concept of running The General’s engine off that cliff in Cottage Grove, Oregon was something of a dare on Bruckman’s part. Keaton had ruined a white Rolls Royce in The Blacksmith four years earlier; when he didn’t get the laugh he expected, he began to suspect that audiences took offense when nice things were destroyed. Knowing Keaton’s penchant for trains, Bruckman thought the story of a runaway locomotive might be funny.

As The General was a flop upon its initial release, Bruckman moved to Lloyd’s studio, working on Welcome Danger (1929) and Feet First (1930) during Lloyd’s difficult but initially successful transition to sound. By all accounts Bruckman was a gas to have around, better at punching up problem projects than constructing them from scratch.

Therein lies part of the problem. He also began to drink heavily. Being paired with famous alcoholics such as Keaton or W.C. Fields [on what turned out to be the best of his henpecked everyman roles, Man On The Flying Trapeze (1935)] may not have been the smartest career choice. He started to disappear on benders, missing production days. This was something the studios had no patience for, especially when some of the projects he was assigned to simply couldn’t be repaired or saved. A pattern of being replaced more and more frequently on projects before filming was completed, started to appear in the trades.

Dessem finds instances of Bruckman’s being announced for a project, yet not appearing on the final credits. His access to drafts of his scripts also allows him to track gags and story concepts recurring with more and more frequency. At best, this is circumstantial evidence of increasing desperation, laziness or the effects of alcoholism. Dessem can’t be sure and says as much, but recounts exactly when Bruckman’s luck starts to run out, and his apparent inability to recognize it. When your job is to let Keaton do his thing and stay out of his way, it all seems a lark, but when trying to direct a former Olympian swimmer who can’t act (as he did with Helene Madison in 1932’s apparently disastrous The Human Fish), someone has to take the bullet.

Meanwhile, Keaton’s career followed a similar downward trajectory at the advent of sound. He was fired by MGM in spite of his films’ popularity, and by 1935 was considered an unreliable drunk. Bruckman would reunite with Keaton to work on Keaton’s Columbia shorts during the hung-over late ’30s and would later be called to work on Keaton’s TV show in 1950. The latter was a series of recreations of old silent bits for the new medium, which was the beginning of a satisfying third act to Keaton’s career. During this time, his early work was rediscovered by a new generation.

In 1927 Bruckman directed what is considered the best pie-fight in silent film history, from Laurel & Hardy’s “The Battle of the Century” (excerpt). This film is not complete anywhere, and only fragments survive. It was considered lost for many years.

Bruckman wouldn’t live long enough to resurrect his own legacy. While working at Columbia and Universal he fell into an increasingly common habit of recycling gags, something certainly not unheard of in the comedy business. He happened to duplicate a sequence from Harold Lloyd’s Movie Crazy (1932) – on which he’d worked with Lloyd – for a Three Stooges short, resulting in Lloyd suing him.

Lloyd was a notorious control freak regarding his own work, and his star had faded by that time, he felt obligated to prove the value of his intellectual property at the expense of Bruckman. Bruckman may not have been the worst offender, but at the time he was the most visible and vulnerable.

The courts eventually found in Lloyd’s favor. By the 1950s, and with his reputation irreparably harmed by the plagiarism lawsuit, Bruckman couldn’t even get work with the low-rent Columbia shorts department. He was reduced to plotting the Abbott & Costello series, not coincidentally mostly reworking their (and his) old stage and movie bits, a tradition the two aging vaudevillians never shied away from, either.

At one point Dessem quotes a letter Bruckman wrote to George Stevens, asking for an emergency loan, near the end of his life; Dessem points out the “familiar mixture of grandiose plans and toxic self-pity typical of the clinically depressed… .” The first time Dessem posits explicitly that depression may have been Bruckman’s medical condition, having avoided any such assumptions elsewhere. (Even the evidence of his alcoholism is anecdotal, never having, for example, been arrested for drunk driving or public intoxication.) Dessem’s on safer ground, and presumably more at home, reporting on quantifiable facts such as script versions and Bruckman’s troubled real estate transactions – he tried to sell his Hollywood home when things turned bad in the ‘30s. 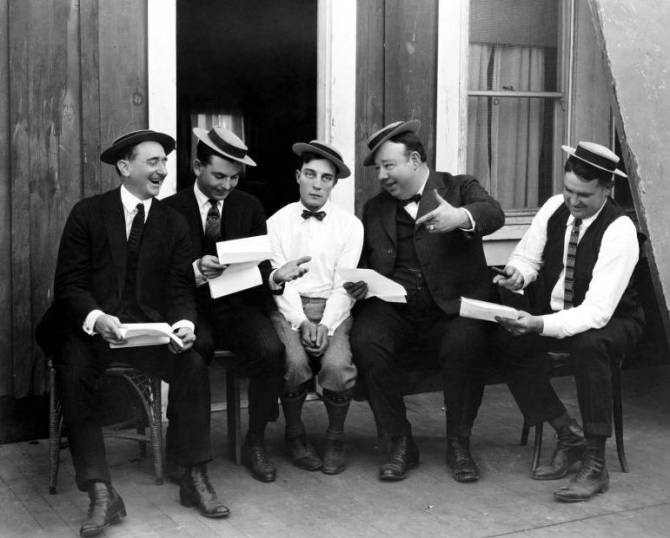 Dessem’s greatest feat here is the impressive amount of primary research he’s done (almost all paper-based; the book has more than 60 pages of notes at the end) piecing together a career that’s part luck, part accident and, yes, riddled with a long history of ideas and gags reused and reshaped for different comedians. He was a journeyman writer who could not adapt to the studio’s transition to sound, to new modes of writing, or to his mounting personal problems.

Like any number of other gag writers from the era, Bruckman was a former newspaperman going from project to project, placed by his drinking buddies in fortuitous situations where he didn’t necessarily need to know what he was doing and the stakes were relatively low. It was a fertile, easy period in which he was able to do his best work with talented collaborators. But while Dessem’s research is focused on Bruckman’s professional career, he is only able to scratch the surface of his personal life. Just a handful of surviving relatives can speak of Bruckman’s home life, and details are sparse and vague. But Dessem is less interested in diagnosing rather than uncovering the most complete picture of Bruckman possible, mainly through his work. The book may lack the character analysis readers may be used to in such sensational and cautionary show-business biographies, but this only makes it seem much more measured and sober, and makes Bruckman, in spite of all the details, still compellingly enigmatic.

So what of Bruckman, reunited with Keaton more than once through the years, but who didn’t live long enough to see a nostalgic reevaluation of Keaton’s work or his own? His best-known contribution to film history was co-writing and helping direct the template for all epic action-comedies to come, The General, remains unknown.

Ironically, Lloyd, whose plagiarism lawsuit was largely responsible for Bruckman’s final decline, controlled his own pictures and kept them out of circulation and off TV, inadvertently causing his own legacy to all but disappear at the same time.

Clyde Bruckman’s story isn’t unique. The motivations behind his suicide may be specific to him, but the lesson rings true. He’s a cautionary symbol perfectly placed, captured here by Dessem as a kind of slow-motion apocalypse during which he had no idea how lucky he was, how out of control he was, or how heartless fortune can become.

We ultimately get the sense that all Bruckman was really trying to do was make a living. His connection to some of the best films of the 1920s and 1930s compels us to pore over the details, even if, while we’d rather not watch the tragedy unfold, we just can’t turn away. There’s something undeniably fascinating about watching nice things slowly be destroyed.

Roger Leatherwood worked in all levels of show business over the last 20 years, from managing the world-famous Grand Lake Theatre in Oakland to projecting midnight movies to directing a feature about a killer, Usher (2004), that won numerous awards on the independent festival circuit. He currently works at UCLA managing the instructional media collections, which to him is its own kind of show business. His film writing has appeared in numerous publications, including Bright Lights Film Journal, European Trash Cinema magazine, and his mondo-cine.