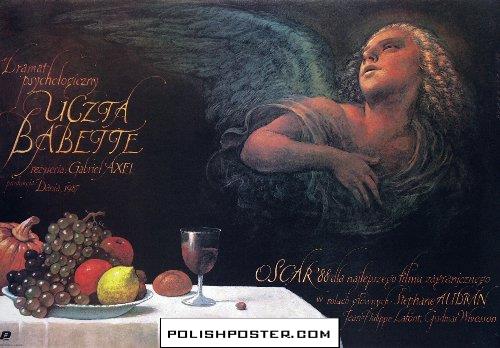 When the movie Babette’s Feast opened in 1987 it caused quite a sensation. Based on a story by Isak Dinesen (aka Karen Blixen), the author’s popularity had grown enormously two years before when Meryl Streep and Robert Redford were directed by Sydney Pollack in the award-winning Out of Africa. It did not hurt that Hollywood had made the late writer a literary superstar for the masses, but Babette’s Feast did very well on its own considerable merits and won an Oscar too. Director Gabriel Axel adapted the screenplay with great sensitivity to this tale of a French housekeeper (Stéphane Audran) with a mysterious past who brings a quiet revolution to a little Scandinavian fishing village toward the end of the nineteenth century, in the form of an exquisite French meal. And what a meal!

You will have a chance to watch her create this gastronomic spectacle on the big screen when Babette’s Feast plays as part of Food Day / Film Day, Saturday, October 24. It shows once only at the Roxie Theatre in San Francisco at 1:15pm.

There will be two special bonuses. The film will be introduced by Gayle Pirie and John Clark of Foreign Cinema restaurant.

And arrive early so you can enjoy tastings of Vanilla Bean Organic Ice Cream from Straus Family Creamery and handcrafted meringues from The Grand Meringue.

Bryan Lowder wrote about preparing the richest, most expensive course in the highly entertaining “Cooking with Babette” on Slate. Enjoy.

He used this recipe for Babette’s Quail in Puff Pastry (made with Duck Fat!)

Stéphane Audran who played Babette loved to cook and said it was easier for her to do the cooking on screen with authority. ”More important was that the director, Gabriel Axel, is a lover of fine food and could translate this passion to the screen,” the actress explained. Except for the finishing touches that Miss Audran tackled on screen, the actual food for the film was prepared by La Cocotte, a restaurant in Copenhagen. Jan Pedersen, the chef, and two assistants were on the set for two weeks. For the Caille en Sarcophage (literally “quails in coffins” which was the nineteenth century term for “encased in puff pastry”), reshooting scenes resulted in the preparation of 148 quails for the dinner to serve 12. The film makers spent $8,000 on the food.

“To complicate matters, some of the actors were finicky eaters who refused to suck the brains from the quail heads as the script called for, until the chefs crafted a brain-like substitute out of marzipan, a paste made from almonds and sugar,” writes Steve Zimmerman in his book Food in the Movies.

Finding the bottles of rare wines used was a challenge, especially  the red wine, Clos Vougeot Louis Latour. Even recent vintages can be scarce. The bottles were filled with apple juice, though Miss Audran insisted that the bottles she took swigs from while cooking had to have the real thing. She said that she was not a good enough actress to pretend with apple juice.

And now……a visual trip through the meal.

A classic Amontillado sherry to start.

Endive salad featuring Belgian chicory and walnuts in a vinaigrette 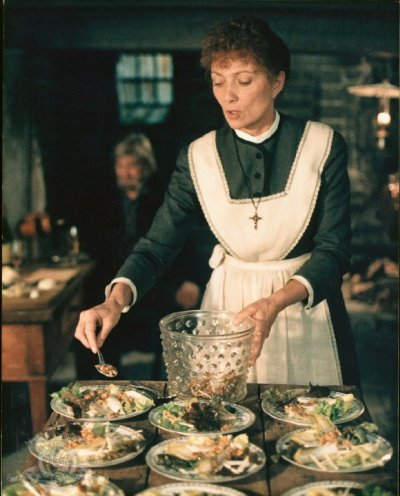 When Babette’s Feast first came to theaters, the U.S. distributor Orion Classics arranged special dinners at the restaurant Petrossian in Manhattan and elsewhere. The New York Times offered some background and several recipes from the meal.

For an in-depth essay about Babette’s Feast excerpted from Priscilla Parkhurst Ferguson’s book Accounting for Taste: The Triumph of French Cuisine, go here.

Babette’s Feast is distributed by the Criterion Collection/Janus Films. Their site is a “feast” of articles, videos and more.

Babette’s Feast is one of four feature-length films presented in our Food Day / Film Day, October 24, at the Roxie Theatre and a program of shorts at the Exploratorium. To view a printable and downloadable program, click here. For more information and advance ticket sales, click here.