There is no time like the Fourth of July for bringing out the excess in festive dining. And the swineapple is as excessive as they come. 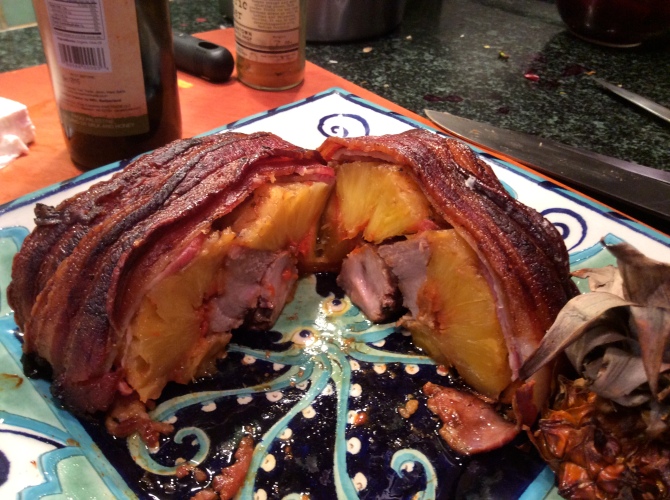 I saw a picture of a swineapple on Facebook a few months ago and instantly knew I had to make one. It seems to have been invented by Josh Bush, who posted it on his Facebook page. It is a hollowed-out pineapple stuffed with pork and wrapped with bacon. The original recipe calls for cooking it in a smoker for a couple of hours, but I thought I’d try it in the oven.

The first couple of times I baked it at a low heat (275°) for three-and-a-half hours. I’ve since tried it in a hotter oven for less time and have found it works just fine.

Rub the pork with the gochujang and the smoked sea salt.

Put the pork on one piece of the pineapple and top with the other piece.

Lay the bacon on top. It’s important that you use thick-cut bacon or it will dry out.

Place in a heavy pan and put it in the oven. Check it after 45 minutes or so to make sure the bacon isn’t cooking too quickly. If it looks dried out, baste with some of the juice and fat in the pan. Keep checking every half hour and when an instant-read thermometer in the pork reads 160°, take it out of the oven and let rest. It usually takes about two hours for mine to cook, but your mileage may vary.

I used gochujang, which is Korean fermented hot sauce, but feel free to substitute another hot sauce. I added the smoked sea salt from Oaktown Spice Shop to give it a little BBQ flavor. Speaking of which, Oaktown recently moved a few doors down on Grand Avenue in Oakland and has a much bigger store now.

Peter Moore lives, shops, and cooks in Berkeley, California. A co-founder of San Francisco’s Roxie Cinema, he worked in the film world for many years until the lure of food drew him into the world of professional cooking. Shortly thereafter, the lure of day shifts and a medical plan drew him out of restaurants, but his love of cooking remained. He is currently an intern at The Crucible in Oakland and an Operations and Development Associate for the San Francisco Silent Film Festival.