Local food and farmers are the focus of CUESA’s “Summer Celebration” in San Francisco, the Oakland Symphony celebrates “Bach and Brew,” and a stunning new documentary about Michelin three-star chef Curtis Duffy, For Grace, screens at SF DocFest this week.

[This is a column we have done on and off. It is popular with our readers, but we didn’t have time to create it each week. We would like to resurrect it on a weekly basis and are looking for someone to curate it. That means keeping track of interesting events in the worlds of Food, Libations and Movies, and even attending some of them.

If this interests you, please write us at EDFideas(at)gmail (dot) com.]

For the coming week, we have chosen a highlight in each category:

Join CUESA in kicking off the summer harvest with a night of feasting on impeccable bites from the Bay Area’s best restaurants. It takes place Sunday, June 14 from 6-9 p.m. at San Francisco’s Ferry Plaza. Since launching the Ferry Plaza Farmers Market 22 years ago, CUESA’s mission has been to bring farmers, food makers, and urban dwellers together to create a healthy food system: a world where fresh, seasonal, and sustainably grown food is at the center of everyone’s plate, and family farming is viable for generations to come.

At Summer Celebration, these local farmers, chefs, bartenders, and wine makers are the stars of the night. Because we love peak-season produce as much as you do, all culinary creations will feature one of five summer plant families, including berries, leaves and flowers, cucurbits (cucumbers and melons), alliums (onion and garlic), and of course, stone fruits. Each artfully crafted bite and cocktail will showcase one of these groups, using the best produce the farmers market has to offer.

Stroll the halls of the gorgeous Ferry Building Marketplace while you enjoy unlimited food and drink. Enjoy great music, go on a culinary treasure hunt to win fantastic prizes, and feast to your heart’s content.

To see who is participating and to buy tickets, visit CUESA’s site, where you will also learn about ongoing activities, classes, many free cooking demonstrations, and other events.

Beer, food and music will be on tap this Saturday for the Oakland East Bay Symphony’s second annual Bach & Brew event. The event is free and open to the public; donations to the Symphony are encouraged. Proceeds from Bach & Brew bring symphonic music and young people together to make amazing things possible at the annual Young People’s Concerts.

A special Symphony Six-Pack is available. It includes three beer tokens, a souvenir pint glass, Drake’s t-shirt, and donation ($50, $20 of which is tax-deductible).

As part of the special offerings for the evening, Drake’s will brew a limited-edition “Symphony Beer,” a recipe selected from one of Oakland East Bay Symphony’s musicians many of whom are avid home brewers. It will be sold at this event only. Other Drake’s beers and food will be available for purchase.

Members of the Oakland East Bay Symphony, conducted by Michael Morgan, will perform music by Bach (of course) and others throughout the event.

For more information and to pre-purchase Symphony Six-Packs (recommended), go to the Oakland Symphony site. 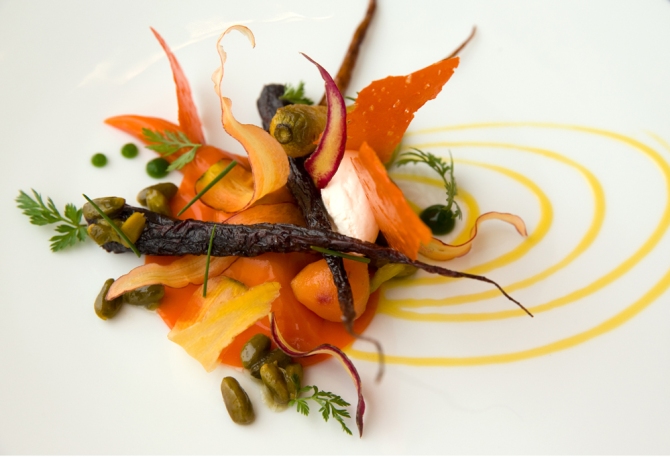 SF DocFest is in full swing as it enters its second week. Pam Grady reported last week in EatDrinkFilms on the wide range of exciting choices. You can find a complete schedule here.

On Sunday at the Roxie, and again on Tuesday, EatDrinkFilms is proud to co-present a new feature film, For Grace.

Chef Curtis Duffy had a vision for a very special restaurant. This film is the story of how that affected his life and those he loved.

Duffy’s troubled teen years took a turn when a teacher noticed that he had a natural talent for cooking and encouraged him to follow that inclination. The kitchen became his safe place after an unimaginable tragedy involving his parents. With food he found inspiration, leading to a career as a sous chef at Charlie Trotter’s and as a Grant Achatz protégé at Trio. The film starts as Duffy is leaving his Michelin two-star restaurant, Avenues. The confines of the Peninsula Chicago Hotel limit his ability to pursue the restaurant he dreams of creating. The chef has plans to design, build and plan a new space in one year. The delays keep mounting, and the tensions cause problems with his wife and two children. Finally, Grace opens in December of 2011 to raves, winning many awards, including three Michelin stars.

The film is not just a documentary about opening a restaurant—Duffy’s personal story is an important element of the drama, from his experiences as a youth to the difficulty of finding a balance between the things he loves: family and career.

But there is no shortage of stunning food imagery to accompany his journey, as we observe the creation of many stunning dishes.

From the Chicago Tribune:

His Saving Grace—The kitchen became chef Curtis Duffy’s escape from a turbulent childhood. This is the story of how cooking rescued him and exacted a price.

“It was the most important night of his career. Curtis Duffy hovered over plates inside the gleaming white kitchen of his new restaurant, Grace. Head down, with the poker face that was the 37-year-old’s default demeanor, he arranged long celery curls, ricotta and fried sunchokes into a three-dimensional wreath resembling the architecture of Antoni Gaudi.

The lock on the glass front door was unbolted, and the first customers walked through.

Finally. The restaurant was supposed to have opened in March. It was now December. The equipment that arrived broken, the delays, the cost overruns — all of it had turned many of his nights sleepless. But so did the pressures of high expectations. Curtis had worked his way up through the finest restaurants in Chicago — Charlie Trotter’s, Trio, Alinea — and earned four-star reviews under his name at Avenues in The Peninsula hotel on the Magnificent Mile. But this restaurant, Grace, was his.

What would customers think? How would food critics react? What if the restaurant was a failure? The hypotheticals lingered, but on this December night, the what-ifs became secondary. 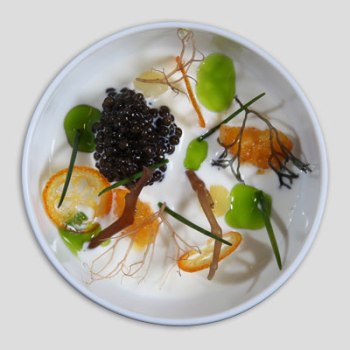 Behind this story, filmmaker/author Pang explains:

“The story began in June 2011, when I heard rumblings Curtis Duffy was leaving Avenues restaurant for his own venture. I moonlight as a filmmaker on the side, and thought documenting the building of his restaurant would be fascinating to watch.

So I followed Curtis—every trip to the empty restaurant space, his last night at Avenues, every important meeting.

As the months rolled by, Curtis began opening up, talking about sacrificing for his career. He talked about how it hurts to not see his two young daughters everyday, with his pending divorce. Eight months into reporting the story, he opened up about the death of his parents. I remember driving home that night, shellshocked over his revelation.

In the end, the story took nearly 20 months to report. There was a lot of downtime, sure, but that’s the secret, I believe, of compelling journalism. Stick around long enough, dig deep, and sooner or later, a story emerges to the surface.”

For more information about For Grace , check out the official website.