It took a lot of nerve, really, starting a baking business in my apartment kitchen, but by training myself to use what I have on hand for all of my life, I was provided with a history of certain derring-do, a yes-I-can attitude that made it a success from the start. If I didn’t love cakes so much, I would have been in real trouble, but it was the love and caring that set the tone right away. I used to tell people that I did not think they should eat cake but once a year, but when they did, it should be mine. Talk about being in love with your product!

An earlier column made mention of my first client, the Nosheria, in Maiden Lane. Within a year I had added six more eating establishments and was getting practiced at whipping up 50 cakes a week. And then the wedding cake orders began, and a whole new ballgame was invented in my kitchen.

The first lesson to learn was that not any one single person or couple would ever order something I had done before. Each wedding cake became a challenge with new things to learn, to invent, to make up, to silently swear about, and keep smiling. I went from the very traditional tiered cake to a Mexican temple, to an alligator bride and groom ornament, to a castle. Two other unusual episodes featured a cake by correspondence—I sent illustrations and step by step instructions. And then there was the Palm Beach Cake, where I ordered the ingredients then flew there with all my cake pans in a hatbox and made the cake in three days. 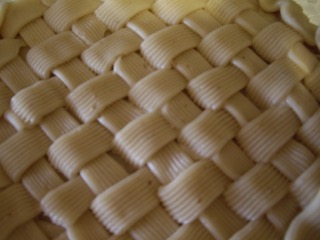 For family wedding cakes and anniversaries I employed my favorite decoration, which is basket weave design and hand-molded pastel chocolate roses. The basket weave lent itself to to a presentation for the Gourmet Gala competition, which I won! One of these days I will surprise everyone with a mashed potato dish done in basket weave!

Another wedding cake order highlight was asking the bride-to-be what time the wedding was going to be. Answer: “6 p.m.” What time for the reception? “6:05.”

In the case of a couple living in Julia Morgan’s house in Seacliff that had four stories of magnificent rooms, their desire was a plain-as-possible cake with no tiers, pillars or height. They did not care about flowers or greenery—or anything, really—so I made four dozen spring blossoms from white wire and ornamental icing to give the cake some stature. 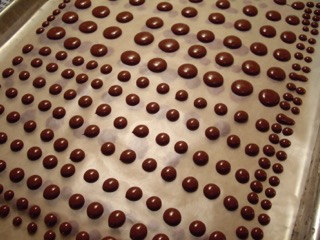 Another modern couple wanted brown polka dots. The florist refused to give me any red roses assembled richly for the reception, so the hostess tore into bags of fabric roses, and that is what I used.

For my own wedding cake just a few years ago, I decided on a bare minimum of frosting. I baked the cakes, cut them into squares and toasted the pieces. They were assembled on three tree cones with a bare minimum of drizzled frosting. This is all extra work, really, for you have to turn the pieces in the oven to get all sides toasted.

Here is the construction of a wedding cake totally themed to puppetry:

Here is the cake Rose Levy Beranbaum designed for Daniel Patterson’s wedding that I helped make in the Coi Restaurant kitchen with Rose:

Today’s wedding cakes are all over the creative map. Just like wedding rings, have you seen this guide to mens rings? It is all your choice. There are many kinds of things that can be stacked on tiers that save a lot of cutting stress—baklava, cupcakes, little cream puffs—but amid all of the ideas is a most-excellent one: Make your own cake. If you are not even engaged this would be a very good time to start while no one is looking. Accomplishment in the kitchen rates gold stars on your personal report card. Even if you buy the parts ready-made and put it together yourself it will be an original creation that everyone will love.

Delivery can be a nerve-racking experience. An adage about wedding cake deliveries with a great ring of truth is that the only person allowed to deliver the cake is the person who made it or the person who bought it. But try this story on for size:

A friend of ours bought a fancy bakery in San Francisco and a truck to deliver the goods to clients. One weekend the cake ordered for a wedding was delayed in getting out of the door and into the truck, and worse, it had to go to Sausalito. Our friend was driving the truck and when he arrived at the first steep turns of Sausalito, he was going too fast and realized it was going to be a matter of saving the truck or saving the cake. The truck won. The cake smashed into an inner wall, but they kept going, already very late. Upon arrival at the reception, which had already started, our friend and his helper hoisted up the cake, covering the damaged part. They ran across the dance floor, found the table for the cake, plopped it down—damaged part hidden in the back—and beat a hasty retreat. I never heard about how the bill was settled, nor the disposition of the bride.

I think it would be a good scene in a movie.