The king of independent animators, Bill Plympton, recently visited San Francisco to present his seventh independently made, hand-drawn animated feature Cheatin’ . You might not expect such a passionate independent spirit to embrace the king of commercial animation, Walt Disney, but like any good animator, Plympton respects the pioneer who elevated the comic art form to a fine art. 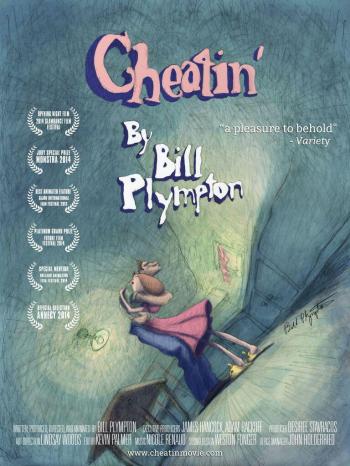 I was given the enjoyable task of shuttling Bill to the Walt Disney Family Museum in San Francisco’s Presidio. He was staying at the home of some friends of the Roxie Theater. I arrived a few minutes early and Bill was a bit early himself, and also a bit hungry, but too polite to partake of breakfast without the permission of his hosts. On the ride to the Museum we contemplated directions, since my new GPS was sending us south when we needed to go north. We settled on Van Ness-to-Lombard, a route he felt was perfect for tourists, since they’re both iconic streets. On the ride there, Bill remembered the TV program Walt Disney Presents on ABC, saying, “It changed my life.”

We arrived at the museum’s Presidio location, with its nondescript brick facade, exactly at opening time, before all the food trucks had opened — a regular Sunday ritual on the large lawn that faces the museum and overlooks the Bay Bridge. In the foyer of the museum, Bill was immediately attracted to the famous Snow White and the Seven Dwarfs Oscar® statuettes: one normal-sized, with seven little ones by its side. (He was surprised at how small they were.) Hundreds of Disney’s awards are prominently on display in the entrance lobby. Once inside, we saw photographs of Disney’s family, and it’s quite clear that Walt Disney was a dedicated family man.

There’s a bit of early Disney history on display as well, along with videos of other early animated efforts such as Krazy Kat, Bobby Bumps, Koko the Clown and especially Winsor McCay’s magnificent Gertie the Dinosaur (1914). Bill pointed out that as detail-oriented as McCay was, for a few frames the tree trunk disappears. I’ve seen the film dozens of times and never noticed that. There is also an actual cell from McCay’s groundbreaking short The Sinking of the Lusitania , which elicited the response, “Look at the detail — damn.” Bill wondered aloud how much a piece of art like this would go for; I knew it was in the thousands, if you can even find one to buy. “Winsor McCay was 40 years ahead of his time,” said Bill. 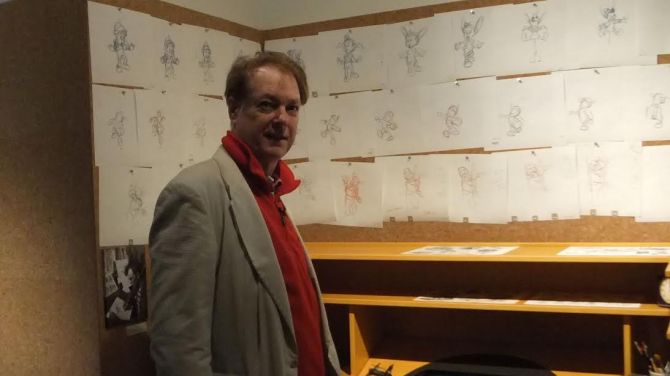 The museum is an exhaustive exploration of Walt Disney’s life and legacy.  Although there is plenty of eye candy for kids, it is mostly aimed at adults with an interest in the visionary artist. The first room is devoted to Disney’s Midwest upbringing: his birth in Chicago, followed by his young life on a farm in Marceline, Missouri, then his most formative artistic years in Kansas City. Bill mentioned that he had an opportunity to visit the Kansas City location of Disney’s original studio, Laugh-O-Gram. He said that it’s finally getting a facelift, but unfortunately the area is still an undesirable part of the city. I mentioned that about 30 years ago I visited the location of Disney’s Hollywood Studio in the Silverlake district of Los Angeles, where Mickey Mouse and Snow White were made. It was an unmarked grocery store at that time.

Walt Disney on board a train. Credit: www.waltdisney.org.

We got into an elevator decorated like a train to simulate Walt Disney’s train ride from Kansas City to California in 1923. The entrance to the next area is a facsimile of the Hollywood sign, each letter lit up with images, some of them moving. Displayed on the walls are clips of early animation efforts, as well as primitive Disney films that showcase his attempts at camera trickery. When I asked Bill if he ever tried playing with film effects, he said yes, but that it was really hard to do. Personally, I found it a lot of fun when I was a teenager, especially when I could come up with creative solutions to solve problems.

The next room is devoted almost entirely to Mickey Mouse, and one wall is papered with a single scene from Steamboat Willie . Bill didn’t remember this room, but I vividly recall it from my very first visit—it references one of my favorite gags, where Mickey fattens up a cow by shoving straw directly down its throat. In the middle of the room are interactive musical instruments simulating how the early sound cartoons were made. This is one the few exhibits that is fun for kids. 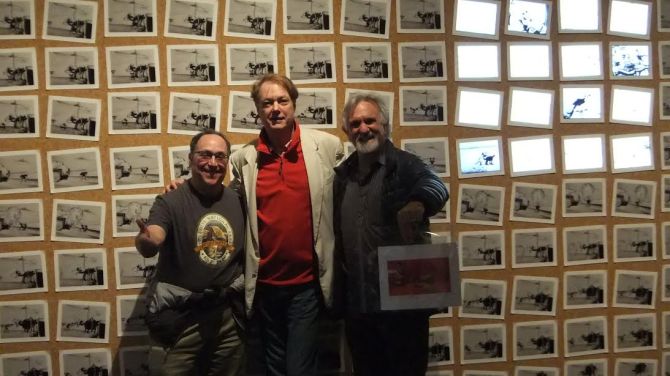 We looked at the very first drawing of Mickey Mouse, which some have attributed to Ub Iwerks. We both agreed it looked more like Disney’s drawing style, although it could have been another artist, including either Wilfred Jackson or Les Clark, both of whom were working at the studio at the time of Mickey Mouse’s creation. Taking in the wealth of drawings that Ub Iwerks created, Bill noted, “700 drawings a day! I can’t beat that. Of course, my drawings have a lot more detail,” then added, “I’d be drinkin’ a lot if I did that.” (Iwerks never attempted to make a feature, even though he had MGM distribution behind him.) I interjected that Bill can get a lot more screen footage because he shoots many frames, sometimes as many as 8, of each drawing. In the animation industry, this is known as on eights; I did notice a lot more twos (two frames for each drawing) in Cheatin’ , and Bill confirmed that he used a lot of twos in the new film.

Thinking about the excellent work that came out of the small Disney Studios, both in Kansas City and Silverlake, Bill said that animation was a dying art form in the ’70s and ’80s — even though Hanna-Barbera had a huge studio, the output “wasn’t really animation,” and the weaknesses even plagued Disney. That was when they created The Black Cauldron (1985), which he feels is a really terrible film. I must agree that despite the usual fine Disney animation, the story takes so many odd and schizophrenic directions that the film almost becomes unwatchable. In Bill’s estimation, things seemed to change when Michael Eisner and Jeffrey Katzenberg came to run the Disney Studios. I speculated that even though those two had a role in the animation renaissance of the late ’80s and the ’90s, it may have had more to do with the first CalArts graduating class and people like John Lasseter, Ron Clements, John Musker, Tim Burton and Brad Bird entering the fold.

Bill wondered why they chose to have the Disney Museum in San Francisco, and I explained that this was the passion project of Disney’s daughter Diane Disney Miller, who lived in the Bay Area; there is an additional Bay Area connection in that Children’s Fairyland in Oakland was a source of inspiration for Disney’s theme parks. Bill appreciated that the museum doesn’t shy away from controversy in presenting a section devoted to the 1941 studio strike. Unfortunately, we were short of time, and left without getting to the centerpiece: a huge room with a spiral ramp that surrounds a recreation of the best of Disney theme parks, with a globe with projections overhead.

Bill mentioned that his next project involves a web series. When I asked if there’s money in that, he replied, “I’ll find out.” I guess if anyone can find success in this new medium it’s Bill Plympton. He’s currently looking for voices to appear in the series. Another of his current projects is a mockumentary about Adolf Hitler. As if that isn’t enough, he’s also embarking on yet another animated feature, Revengeance , and for the first time on a feature, he’s collaborating with another artist, indie animator Jim Lujan. They are currently soliciting funding via Kickstarter. Another new venture is making Cheatin’ available online via Vimeo for a $4.99 fee. We can also see segments he directed and animated in two collaborative features, The ABCs of Death 2 and Kahlil Gibran’s The Prophet .

I’m always amazed at the quality and quantity of Plympton’s work — making several shorts a year in addition to working on one (or more) feature seems like an impossible task. Yet he does all of this and still has time to attend film festivals and make personal appearances to promote his films. Just like the classic animated cartoons, I keep expecting to find a room full of Bill Plymptons, ready to take on the many tasks he assigns himself.

Now streaming on Vimeo on Demand.

Steve Segal started his film career by opening a traditional animation studio in his hometown of Richmond, VA. There he and his staff made commercials and educational films for 10 years.  At the same time he produced several independent short films that have won awards at international film festivals. Some of the festivals which have exhibited his works are the Cannes Film Festival, Zagreb Animation Festival, Ottawa Animation Festival, the Sinking Creek Film Festival, and the Los Angeles Animation Celebration; these films have also been included in theatrical packages, such as the International Tournee of Animation, The Computer Animation Show, Futuropolis and Timeless Tales of Fantasy. His most recent personal project is Outside The Box, a piece where he performs live interacting with a television set; it won first place at the 2014 San Francisco ASIFA Animation Festival.

In 1984, Segal moved to Hollywood and worked on a variety of projects. That same year he animated a CG character for a soft drink commercial. His fascination with computers continued as he used an early computer program to plan scenes for the Disney feature The Brave Little Toaster. He worked as an animator and cartoon curator for the innovative TV series Pee-Wee’s Playhouse. Later he directed Cartoon Jukebox, a series of cartoons based on children’s music for an early form of CD-ROM called CD-I; he followed this with another series based on the music of the Beach Boys. In between major projects he created some smaller works like title sequences for the feature film Drop Dead Fred and the TV series The Best Of Comic Relief and a musical film for Sesame Street.

His big break came when he was asked to join the pioneering CG studio Pixar to work as an animator on the feature film Toy Story. After the film was finished, he worked there on several projects, including CD-ROMs based on Toy Story, It’s Tough to be a Bug! (a 3D film for Walt Disney World), California Adventure; the short film Geri’s Game; and some commercials, including one in which he acted as director and animator. The last project he worked on at Pixar was A Bug’s Life.  Since leaving Pixar, he has concentrated on teaching and raising his two children.
As a professor at California College of the Arts, The 2014 CCA group project Domoic Acid Attack was made for the Marine Mammal Center to generate awareness of a problem affecting sea lions.