I love the anthology (or, as it’s more strictly termed, “composite”) film. It allows its component tales to be the length that they need to be, neither squeezed nor stretched; and yet still be part of a satisfying sit-down meal of entertainment.

Giving a composite a sense of unity is tricky. You can pull the Arabian Nights gag and tie the stories with a storyteller. You can unify with a place (New York Stories ), or a framing tale (Creepshow , with its haunted comic book). You can interweave the plots (Magnolia ) or present them in a cool, nutty artifact like Grindhouse .

What I enjoy most about Wild Tales is that it does none of the above. It tells six stories, one after the other, with no chapter breaks or titles between, and leaves the rest to the viewer. In one case, a story had ended and the next had begun for about fifteen seconds before I realized I was in a new “tale.” I loved that. 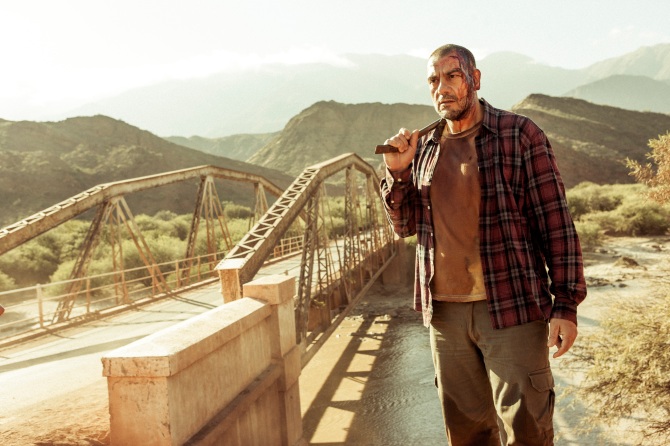 Wild Tales just hits you with the stories, and they all cling together by magnetic attraction. They’re all essentially horror fables, but the horrors live in the everyday world—no brain implants, zombies, or elves. They’re powered by homespun injustice, righteous indignation, and etiquette gone bonkers. They have the kind of film violence you momentarily take seriously then end up laughing at when it keeps going and going. And they are all underpinned by a big, affectionate, satirical, sharp-toothed grin.

I noticed in the film’s opening credits that Wild Tales has been funded by just about every source in the showbiz universe (I believe I counted twelve—I was expecting to see the director’s babysitter among them.) But I consider that a very good omen whenever I see it. It means somebody is doing something new.

For nearly 40 years Penn & Teller have defied labels—and at times physics and good taste– by redefining the genre of magic and inventing their own very distinct niche in comedy. They’ve had sold-out runs on Broadway and in Las Vegas; world tours; and Emmy-winning TV specials and shows (including Showtime’s Penn & Teller: BS! (Amazon or Indiebound)).

Teller directed the duo’s acclaimed documentary Tim’s Vermeer (2013) as well as a version of Macbeth (via Amazon or Indiebound) that successfully toured the East Coast, and the off-Broadway thriller Play Dead. For more about Penn & Teller scroll to the bottom of this piece.

Érica Rivas as Romina in “ ’Til Death Do Us Part,” from Wild Tales . Photo by Javier Juliá, courtesy of Sony Pictures Classics.

WILD TALES: Six Trips on the Road to Hell

Dazzling, dizzying and deep, Wild Tales proves to be a searingly apt and more-than-appropriate moniker for writer/director Damian Szifron’s turbo-charged and wonderfully engaging rumination on the darker aspects of the human condition—and 21st century civilization.

Rage, revenge, murder, anger, avarice, greed, pride, stupidity, infidelity, deceit and love (in about that order) reign supreme in this literal and cinematically resplendent cornucopia from Argentina, which recently grabbed a much-deserved Academy Award® nomination in the Foreign Language Film category. It’s the kind of knockout movie experience that, in any other year—especially one devoid of such titanic works as Ida and Leviathan—could have easily walked away with the prize.

Dario Grandinetti as Salgado and María Marull as Isabel in “Pasternak,” from Wild Tales . Photo by Javier Juliá, courtesy of Sony Pictures Classics.

Pulsating with energy, style, bravado, and yes—light—Wild Tales is quite the spiritual movie as well, with its implications of the law of attraction, karma, and causality operating in consonance with an indifferent universe, doled out in exacting measure amongst extremely colorful characters whose untamed and emotionally imperforate psyches scream for expression.

Framed by a Gustavo Santaolalla musical composition that evokes Sergio Leone by way of Quentin Tarantino, and alongside Sziforn’s assured penchant for veering toward the violent, psychically lacerating and cynically resigned, Wild Tales also boasts surprising humor, horror and hope in the series of six, unrelenting, can’t-look-away, thematically interconnected stories which form the bulk of its narrative – a thrillingly unified directorial vision that quite simply amounts to a never-boring-for-a-second thriller/noir/dramedy saga on human folly.

Before the Main Title credits (projected over pictures of wild animals) roll, the mood, tone and the stage are set for the dysfunctional behavioral onslaught which is to come.

Rita Cortese as Cocinera and Julieta Zylberberg as Moza in “The Rats,” from Wild Tales . Photo courtesy of Sony Pictures Classics.

“Pasternak” is the story of a group of airline passengers who suddenly realize while airborne that they all have a similar connection (coincidence?) to a failed composer, giving new meaning to Francis Bacon’s proverb “Revenge triumphs over death.”

This is immediately followed by the Tarantino-esque “The Rats,” where more revenge takes center stage (literally echoing Don Corleone’s “dish that tastes best when it is cold”) when a cook at a roadside cafe helps a waitress exact justice from a criminal the latter recognizes as the murderer of her father.

The graphically violent “Road To Hell” will make you think twice about road rage; and the protagonist of “Bombita” uses his demolition expertise to coerce a corrupt government and political system to acknowledge his reality (which amusingly recalls Jesse Royce Landis’ advice to Cary Grant in Hitchcock’s North by Northwest — “Roger, pay the two dollars”).

Oscar Martínez as Mauricio in “The Deal,” from Wild Tales . Photo courtesy of Sony Pictures Classics.

Greed, deceit and more corruption follow in “The Deal,” when an affluent young man’s car accidentally strikes a pregnant woman, and his wealthy parents convince the family groundskeeper to take the fall. And in the superlative and uncomfortably hilarious “Till Death Do Us Part,” both bride (Erica Rivas—in perhaps the film’s best performance) and groom unwittingly receive some unexpected lessons about honesty, love and forgiveness.

Wild Tales then is exhilarating movie-making — a very human, relatable and entertaining picture happily being widely released during a time of the year usually neglected by studios and distributors. In other words—here’s something actually worth seeing during the first week of March. And to take it in is to revel in the human folly on display, perfectly summed up in the film’s final image – as satisfying, logical and joyful a denouement as one could ever possibly want in a movie this overtly nasty – and bleak. (Nicole Kidman knew from whence she spoke in that final scene from Eyes Wide Shut , only probably never intending it be in full view of one’s own wedding party.)

Tim Sika is the host and producer of Celluloid Dreams: The Movie Show; director of the Camera Cinema Club; DVD reviewer for The Ronn Owens Show (KGO NewsTalk 810 AM San Francisco); and President of the San Francisco Film Critics Circle.