San Francisco’s Noise Pop and Baltimore’s Maryland Deathfest have this in common: They both bring music fans together in celebration. Maryland Deathfest bills itself as the premier metal festival in the United States. Noise Pop filmgoers will have the chance to judge that for themselves when the festival screens Welcome to Deathfest at Artists’ Television Access on Saturday, Feb. 21.

A documentary that includes performance footage of the Melvins, Down, Venom and many, many more bands, the emphasis is less on what’s happening onstage than in what is going on behind the scenes and how Deathfest plays out for fans, musicians, and founders Ryan Taylor and Evan Harting. Directors Tom Grahsler and Alicia Lozano picked the right year to capture the festival, 2013, Deathfest’s 11th year but the first since its longtime home, the Sonar Compound (rechristened the Paparazzi Nightclub), sold to new owners. Backstage melodrama reigns over everything from hotdog vendors to closer Venom’s late start. Not that the fans or musicians (at least until the doc’s climactic scenes) seem to notice in this amiable doc. This is a weekend for music and camaraderie, a yearly gathering of the tribe.

Noise Pop’s own tribal gathering includes 14 film programs that screen from Friday, February through Wednesday, February 25. Kicking things off at the Roxie is the West Coast premiere of Hardcore Devo Live , a concert doc shot at Oakland’s Fox Theatre of the band performing the experimental music they wrote back home in Akron from 1974-1977, at the birth of their devolution. Filmmaker Keirda Bahruth and Devo’s Jerry Casale will be on hand for a Q&A.

Scheduled opposite Hardcore Devo Live , Noise Pop gets back to the future with a screening of Fritz Lang’s 1927 Expressionist sci-fi classic Metropolis . Synth musician Chrome Canyon (artist Morgan Z) provides a live score that, according to Cinefamily, “creates synth sounds that move between eras past and ages imagined.”

Jazz instrumentalist Rahsaan Roland Kirk—who played tenor sax, flute, clarinet, and many other instruments, and sometimes several at once—has been gone nearly 40 years. But he lives again in Adam Kahan’s The Case of the Three-Sided Dream . Screening Saturday, February 21 at Artists’ Television Access, this documentary is as playful and vibrant as its subject. Kirk’s family, friends, and musical colleagues recall his life, his art, his politics, and his devotion to promoting jazz as black classical music (and his determination to get jazz on television, making news when he disrupted a taping of the Dick Cavett Show with a bit of humorous agitprop). Animated sequences and home movies help complete the portrait, but in the film’s many musical moments it is the man himself who makes evident what was lost with his early death at 42. The Case of the Three-Side Dream is an indelible homage to a tremendous talent.

Also on Saturday at the Roxie, the 1980s live again in Salad Days: The Birth of Punk in the Nation’s Capital . Director Scott Crawford started going to shows in Washington D.C. when he was 12 and even started publishing his own zine, Metrozine , when he was just a kid. Still enthralled with the music three decades later, he shines a spotlight on the scene and its DIY spirit. Ian MacKaye of Minor Threat and Fugazi (also the co-founder of Dischord Records); Dave Grohl, who came to the attention of Nirvana when he was playing drums for Scream; and Henry Rollins, who recounts his conversion to punk and his early years in S.O.A., are among the many musicians interviewed. Perhaps even more valuable than the reminiscences is the wealth of archival material, performance footage and stills that lend the documentary a you-are-there feeling. 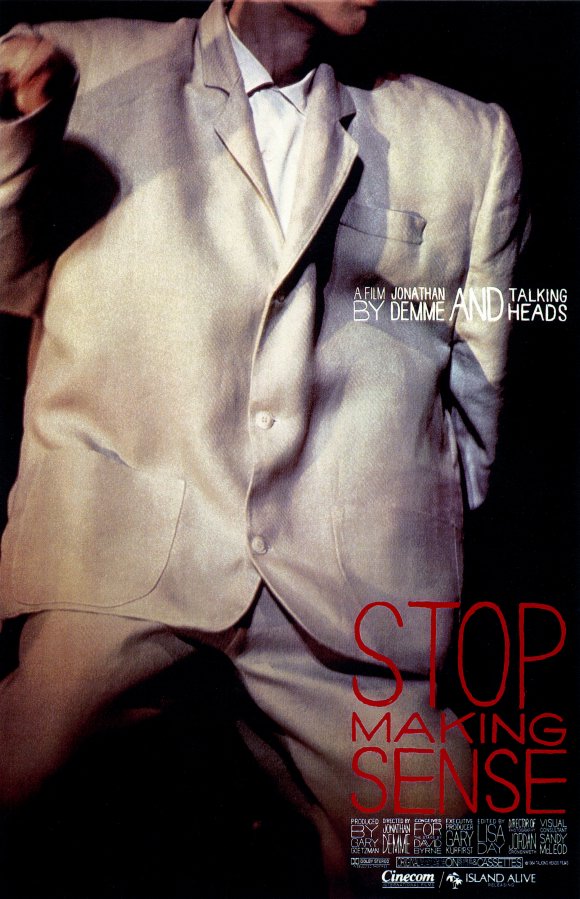 On Monday, February 23, see David Byrne in a really big suit as Noise Pop presents Jonathan Demme’s classic concert film Stop Making Sense . The Talking Heads are in peak form and so are their collaborators, including singer Lynn Mabry and Parliament-Funkadelic keyboard player Bernie Worrell, in a film cobbled together from the best moments over three nights of performances in December of 1983. “Psycho Killer,” “Burning Down the House” (and they do), “Once in a Lifetime,” and “Take Me to the River” are among the songs, but not necessarily highlights in a celebratory documentary full of them.

Other film events at Noise Pop include a screening of Spike Jonze’s skate videos; an appearance by filmmaker Lance Bangs, who will present a selection of his work and preview his latest documentary on New Jersey’s Screaming Females; Beautiful Noise , a documentary on the music and influence of the Cocteau Twins, the Jesus and Mary Chain, and My Bloody Valentine; and more. You can check out the full set list and buy tickets at film.noisepop.com. It is an exemplary program full of happy surprises. Maybe you think you hate metal. That doesn’t mean you won’t love Welcome to Deathfest .