The following is an excerpt from Hope for Film: From the Frontlines of the Independent Cinema Revolutions by Ted Hope, with Anthony Kaufman.

Reprinted by permission of Soft Skull Press, ©2014. Please support your local bookshop, or buy the book through our affiliate links with IndieBound and Amazon.

Hal Hartley’s experimental film Flirt came together on a napkin at Cannes 1995. Although I had already produced well over ten features, it was the first movie for which I put the financing together totally by myself. We had already shot a third of the film in Manhattan and had plans to complete the filming of the other two parts in Berlin and in Japan. In February, we had taken the project to the international Cinemart in Rotterdam, where we conducted some preliminary meetings to get the ball rolling. Cannes was the perfect place to close it up. All we needed to do was figure out exactly how we’d split the financing and recouping of the investor’s money. At the Carlton Hotel, I sat with Reinhard Brundig, one of the founders of the German company Pandora (which backed films by Emir Kusturica and Jim Jarmusch), and Japan’s Satoru Iseki (who financed films by Chen Kaige and Wayne Wang), and we sorted out a tidy, equitable three-way agreement while looking out over the French Riviera. It was an ambitious project for a one-million-dollar budget, but I was confident that I could pull it off. And now I had the signed napkin to prove it. 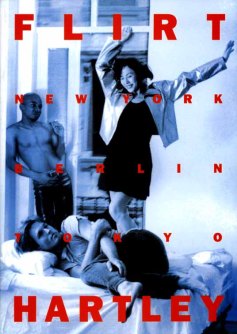 Japan’s production methods, however, are very different from those of independent film in America. Iseki-san wanted to take care of us. When we arrived in Tokyo to prep, he set us up with the Kurosawa Group—founded by the great Japanese director Akira Kurosawa—to manage the production. Iseki initially insisted that we stay at a prestigious luxury hotel, the Rihga Royal, the perfect place in his mind to convey our status for impending meetings. Watching the film’s funds dwindle rapidly under the Rihga’s roof, I wanted to find a more affordable place to live.

Meanwhile, I had gotten hold of Tokyo Decadence—a controversial film that was one part Antonioni and one part S&M porno—and had shown it to Hal, who immediately wanted to meet the actress Miho Nikaido from the film. But because of that movie’s graphic content, the Kurosawa Group didn’t look favorably upon her and we couldn’t get a meeting. The group had been encouraging us to meet with another actress who was achieving a level of mainstream success. Hal met her, and the actress had seemingly been led to believe that she was already cast, despite Hal’s not saying anything of the sort. But Hal kept insisting that we find Miho Nikaido.

Time and money continued to slip away. And it became clear that our method of producing movies was quite different from the Kurosawa Group’s. It felt like I was left with no choice: I had to fire Kurosawa, which for me—a film aficionado—as well as to all of Japan, was akin to firing God. For the good of the movie, I had to find a team more accustomed to an American indie way of working.

I moved us out of the Rihga Royal and into a “businessman’s” hotel. The difference between that and an “economy” room, which was the next step down, was that in the “businessman’s” room you couldn’t reach everything from the bed. It wasn’t living in a pod, but it was close. And it was certainly not the kind of place where you could conduct meetings, let alone try to impress anyone. But it was what we could afford.

Around the same time, we got word that the Kurosawa Group’s actress wanted to meet again with Hal. Respect demanded that Hal take the meeting. He arrived in his then-customary white shirt, tweed jacket, and Timberland boots. I waited outside the coffee shop, looking in from the outside. Their conversation seemed curiously formal. She ordered a coffee, but it just sat there untouched and ominous. The conversation got heated as the coffee grew cold. Animated and passionate discussions were something you did not see much in Japan. And then, boom: Splash! Hal’s white shirt was brown. The actress was so horrified about not being cast she had set up the whole tête-à-tête just so she could throw a cup of coffee at my director.

Unbeknownst to me, the one-two punch of the actress debacle and firing of the Kurosawa Group looked as if it might destroy Iseki-san’s standing in the community—it cost him face. He called me and told me he was going to withdraw from the production.

The contract was structured in a way that this meant he would forfeit the money already spent. For him to quit and lose the money he had spent indicated how serious he had taken this offense. But I still needed more money to shoot and to get us back to the States. Good Machine was relatively young at the time. I didn’t have much money to do the film, I was using some of our corporate funds to float the production, and even that had run out. I had all my American crew stranded in Japan and didn’t know what to do. I felt if I spoke to anyone—Hal, my business partner, even my wife—they would panic and make the situation worse. My first attempt at producing soup to nuts, complete with securing all the financing, was collapsing before my eyes. I was on my own without a penny to my name, in a foreign land, having fired God and lost the one ally who could get me out of there intact. To top it all off, at my side were friends who expected me not just to produce a movie, but also to pay them along the way.

One trait that helps producers is an imagination that can take you to the worst-case scenario, so that you can guard against it. I am prone to many dark thoughts, but I hadn’t anticipated this.

Thirty-six hours later, Iseki-san called me and said, “We’re going to go to the mountains; I’m picking you up at seven am.” Before I could ask anything, he hung up. He was waiting the next morning at sunrise in front of my pathetic hotel. I opened the door of his BMW, but he didn’t say a word. He just kept staring ahead as we drove up higher and higher into the mountains. I had seen movies like this, and they always seemed to end with an execution in the snow.

It felt like an eternity had passed. We had listened to about half the Miles Davis catalog, when Iseki-san stopped in front of a mountain inn. It turned out to be a traditional bathhouse with large, communal, natural hot spring pools. The two of us spent the next few hours still not talking, but stewing away in the bath together with about twenty other guys (who I don’t think had the same problems to work out that we did). It was clear that this was no minor matter: I had put Iseki-san in a very difficult situation, and he was going to be sure that I understood the situation. He wished the movie did not have to take precedence over human respect; in short, and without any words, he told me I had let him down as a friend, even if he understood it was on behalf of the film. With nothing but a few careful looks into my eyes and a tremendous amount of patience, Iseki-san told me that ultimately, he felt that he could survive this situation professionally and he trusted Hal and my judgment. As we drove back down the mountain on the dark, unlit roads, it became clear he would continue to fund and produce the film with us. If the art of the samurai is not having to draw one’s sword, I had just witnessed the technique in a Japanese bathhouse.

This wasn’t just an instance of wanting to see me sweat; Iseki-san was sincere. I came to understand his situation. And I was deeply respectful of it. It was a critical moment for me because I learned how important it was to understand the psychology and motivations of the financier, and that many factors weigh in when financiers choose to get involved. The Kurosawa Group had helped Iseki-san in his career, so when we fired the group, it was like the son rebelling against his father.

When we returned from the mountains, the crew and I went out for sushi with Iseki and drank very, very heavily. It was the first time I had both beer and sake over the course of a single night, but it is now my custom whenever I eat sushi—it is my salute to Iseki. I don’t think any of the crew knew what the alcohol was purging that night, but I was toasting my survival and the trust of a good friend and business partner and hoping it might spare me similar situations in the future.

We encourage you to buy or rent Flirt from your local independent book or video store, or you may use our Amazon affiliate link. You’ll also find many other films by Hal Hartley are available on FANDOR or Amazon.

Ted Hope is one of the most respected voices in independent film. As the creator, editor and regular contributor to the blog HopeForFilm, Hope provides a must-read forum for discussion and engagement about the critical issues faced by filmmakers, artists, and the film industry in today’s global, market-driven economy. A true expert in the field, a survey of his 65-plus films includes many highlights and breakthroughs in independent cinema, including Ang Lee’s The Ice Storm, Shari Springer Berman and Robert Pulcini’s American Splendor, Alejandro Gonzalez Inarritu’s 21 Grams, Todd Solondz’s Happiness, Sean Durkin’s Martha Marcy May Marlene, and Greg Mottola’s Adventureland, amongst many others. In 1990 he cofounded with James Schamus the production and sales powerhouse Good Machine, which was sold to Universal in 2002. Known within the industry for having an extraordinary ability to recognize emerging talent, Hope has more than 20 first features to his credit, including those of Alan Ball, Todd Field, Michel Gondry, Hal Hartley, and Nicole Holofcener. An exciting and prolific voice on Twitter with over 30,000 followers, he’s contributed to numerous publications, including The New York Times and Filmmaker. He is currently CEO of Fandor.