By the time I got around to contacting Andrea Crawford early in 1987, she was working with the cream of the new second wave of Los Angeles restaurants (the first wave—La Toque and Ma Maison—having closed; Michael’s was still open), and the ones she didn’t supply wanted her product.

When I came on to run her crew and take care of the daily mix, Andrea became less involved with the garden and more concerned with the back office work. Denny had taken over her role as head gardener. My decent Spanish helped smooth things over with the crew of eight, who had issues with immigration, drunkenness, family dramas in Mexico and, of course, pay. After a few years of working together they had become a tight-knit family and welcomed the security, unusual in any agricultural job—especially one in the city.

I would arrive at around 7:30 in the morning, check the orders, assign the cutting by plant and quantity, and then join them in the beds. It was all very low tech, with the restaurant names and the number of boxes recorded on the answering machine the night before and entered on a blackboard. We cut everything by hand, carefully, leaf by leaf, using scissors, and filled Styrofoam boxes that were placed in the shade of the packing shack when they were full.

We were generally done by noon, three or four hundred pounds being a typical harvest. A large piece of shade cloth was laid out, and the boxes of greens were emptied to form a giant mound according to the master recipe, which varied slightly based on availability. After washing my hands, I would hand toss the mix for five minutes or so, and the team would fill each box with three pounds of mesclun. They were stacked six or seven high. Individual orders might include, besides mesclun, boxes of cooking greens such as baby spinach, arugula or radicchio, or baby red and green romaine for caesars. There were beautiful nasturtium and borage flowers in the mix and also sold separately as garnish. And there were bags of cooking herbs, including exotic basils and thymes.

Kenter Canyon Farm never bothered with organic certification, but all the greens were grown organically, with no toxic chemical sprays, and only compost as fertilizer.

The restaurants were on a very tight schedule to get ready for dinner, because they often had nothing left in the walk-in from the night before, knowing that new product was on the way. We spoiled them and they got used to being able to make us jump. I would deliver the boxes to the restaurant kitchens in the company Toyota van, a headlong dash across Los Angeles that ended around 4 in the afternoon. Spago had the largest order, often a dozen boxes or more. Their kitchen was always a zoo as the overworked staff struggled to keep up with their popularity. I kept the air conditioning running even when I parked because the blazing LA sun would have quickly wilted our delicate crop.

My favorite days were during the summer when my son, Beau, would come to work with me. He would read a book or play with Legos in the shade until it was time to do the deliveries, which he loved because the cooks would give him amazing cookies at almost every stop. We had a little cheer: We would chant Angeli slowly three times and then yell out Petite Chaya loud and fast. We thought we were so cool.

At one point it occurred to me that it might be possible to ship the lettuce by FedEx to other cities using early morning courier service without refrigeration. Since the lettuce was unwashed and freshly cut, and their cargo planes were generally kept below 50 degrees, and also because the product was delivered by 10:30 am the next morning, chances were the product would arrive in good condition. I got a Zagat’s guide for New York and started calling around to see who I could interest. 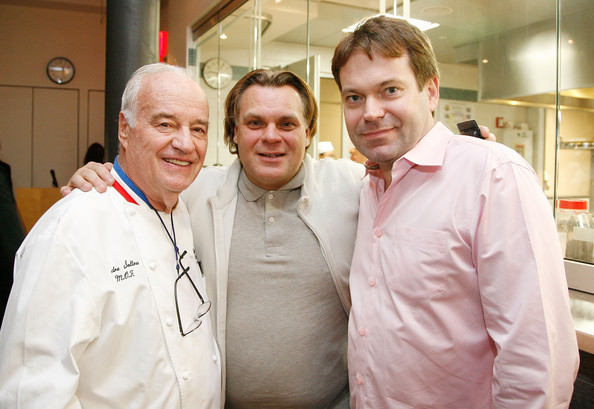 The first chef I spoke to was Andre Soltner at Lutece. He was an institution, some say the first American superstar chef, and one of the masters at adapting traditional haute French cuisine to the American sensibility. I was surprised that he took my call, but he told me he was always looking for new ingredients and he didn’t get many calls from California. After a thorough grilling on who we were, and how and what we were growing, he said he would be willing to try. We sent him a box and he immediately called to say that it was a perfect salad. He wanted to place a weekly order of five boxes at 45 dollars for three-pounds-plus FedEx charges of more than 20 dollars.

Once Soltner ordered, I used his name as I called around to the other restaurants. I used to laugh at myself in the field bent over cutting lettuce with one hand, giving instructions in Spanish to the crew, and holding the portable phone in the other talking to David Bouley at Bouley, Charlie Palmer at River Café, Daniel Boulud at Le Cirque, Thomas Keller at Rakel’s, Eberhardt Mueller at Le Bernardin, Jean George Von Gerichten at Lafayette, Barry Wine at Quilted Giraffe, David Waltuck at Chanterelle, Danny Meyer at Union Square Café, Jonathan Waxman at Jams, and Brendan Walsh at Arizona 206. All became customers as soon as they got a sample. Amazingly, all the lettuce arrived at their kitchens ready to serve, even during the heat of summer. I can’t remember a single box that was rejected. For more than two years Kenter Canyon Farm was the only game in New York, and the chefs happily paid what would now be considered truly outrageous prices for salad that was not even washed.

The relationship between Andrea and Denny had become increasingly tense despite their business success. Denny was passionate about his boat and sailing and his kids, the garden not so much. Andrea was totally focused on expanding the business, and she began to see her husband as an impediment. One day they got into a screaming match in front of all of us and she left yelling, “It’s over. I am divorcing you. We are finished.” As she sped away, leaving a cloud of dust, Denny muttered something like, “Women. She never understood me.” And that was it. We shrugged and went back to work. They separated soon after and never looked back. Eventually Denny got the five acres, changed the name to Maggie’s Farm, and Andrea went on, with her second husband, to own a much larger farm in Fillmore near Ventura.

About once a week we would be visited by “guests,” many of them farmers or wannabe farmers who’d heard about our garden from chefs and wanted to see how we grew that perfect salad. We had managed to stay under the radar, no press, no interviews, but the Chez Panisse mystique and the originality of the product were its own publicity machine. We were doing everything possible to discourage competition, though we knew it would come eventually.

And of course it did. Today spring mix is a several billion dollar business with commodity prices of $1.50/per pound to the farmer. Kenter Canyon Farms, with its twelve-month growing season, was grossing close to a million dollars a year on five acres, with minimal overhead, and the rest gross profit. Other than marijuana, no agricultural venture has ever paid anything close to that per acre.

Terrel had just moved to a new agency, a group called Bauer Bendek (Marty Bauer and Peter Benedek) that later became UTA. Peter invited Terrel and I to a Malibu beach house for dinner with the proviso that I was to bring the salad. I showed up with a three pound box for the six of us, and it was like I had offered them cocaine. I kept making salad and within a few minutes it was all gone. There were screams of delight and requests to deliver more to the office, which of course I agreed to do.

Andrea had paid me well to run the crew and do the marketing. I envisioned a different role for myself as a future partner. She had a wonderful sense of style and totally understood how to import the joie de vivre of Provence to Los Angeles. I thought the best way to use her gardening and design talents was to create a retail store in Beverly Hills that would sell the garden produce along with elements of the life style—Whole Foods meets The Gardener. For some reason Andrea thought wholesale was the way to go, and she didn’t take me up on the offer. With the door closed to a real role for me in her business, we parted on friendly terms.

Other growers such as Earthbound Farms and Todd Koons Organics (TKO) came along a few years later to mass merchandise baby lettuce and create the Salinas-centered corporate salad industry we have today. But it was Andrea who, starting with Alice’s Chez Panisse recipe, really created the template mesclun salad that was original, beautiful and irresistible, winning over major chefs, developing interest and demand, and establishing the benchmark against which the current products pale in comparison. Both deserve the credit.

Isaac Cronin is the author and editor of fourteen books, including six cookbooks. He has been a commercial fisherman and a farmer, the marketing director of a cookbook publishing company, and a screenwriter. He is a founding partner of Meteor Oven, an Oakland company with a new ceramic that improves cooking speed and enhances food flavor.