Discussing a stillbirth, no one wants to say, “The baby might not have amounted to much if he lived.”  Admittedly, director Frank Pavich’s Jodorowsky’s Dune (2013) is a work of tender fandom.  Forty years ago Alejandro Jodorowsky, a Chilean Polish mime turned Mexico City cartoonist, was an exemplar of the midnight movie maker.  He is today a polite rascal in his 80s, able to beguile newer directors (such as Drive’s Nicolas Winding Refn) with tales of the film that got away.  Pavich’s documentary tells of the unfinished Dune: a proposed meeting place in the 1970s for Dali, Orson Welles, Mick Jagger, Moebius and the late H. R. Giger, derived from a science fiction tome Jodorowsky intended to ravish like a bridegroom.

Audiences respond to the ardency of Jodorowsky’s pitch in the way they do to a great Shamwow salesman—it’s not the material, it’s the art of the sale.  Who can help feeling sympathy for an old director’s “burden of dreams”, as Les Blank put it?  As for the films Jodorowsky made, excerpted clips from the director of El Topo and The Holy Mountain (1973) strobe between Leone’s westerns, Biblical analogy and Tarot card imagery.  Gory as they are, the examples given in Pavich’s film are some of the least extreme.  Jodorowsky’s cinema is fairly rapey.

But the critics interviewed here, including former Ain’t It Cool scribe Drew McWeeny, assure us that what Jodorowsky was doing would have anticipated Star Wars … as if there could be no higher goal for a film than to beat Lucas to the punch.

No question, Jodorowsky’s Dune would have had the cool planets and cool spaceships the geeks demand, but there’s nothing in Jodorowsky’s previous work that suggests this film could have been the hit that changed cinema, despite what we hear on screen.  Those who made a mint in science-fiction of the late 1970s thinned that genre with others.  There wasn’t a Bogart movie this side of The Two Mrs. Carrolls (1947) that Lucas didn’t borrow from when creating Han Solo.  Similarly, Alien (1979) is easily recognizable as a haunted house film in space.  Blade Runner (1982) survived cult film status because viewers understood it as a new kind of detective film.

In 1984, we did see a Dune, and it failed to change the human race in the way Jodorowsky anticipated.  Jodorowsky describes his dread of seeing a completed Dune because David Lynch is a genius … after seeing it, Jodorowsky was guiltily relieved that Lynch’s Dune was a failure.  To bolster his case, Pavich goes straight for the underbelly of the 1984 Dune: a clip of the bad green-screen effects with Kyle MachLachlan riding on a sandworm, something parodied in Claymation a few years later in Tim Burton’s Beetlejuice (1988).

Of course, Pavich could have just as easily shown many of Lynch’s inspired choices—such as the Spanish colonial look derived from the happenstance of the dusty prop room at Churubusco Studios, a bold production design that ought to have attracted a lover of the Spanish baroque such as Jodorowsky.  The bouncing-ball Harkonnen isn’t Welles, but he’s played by Kenneth McMillan, Welles’ fellow Falstaff (for Joseph Papp).  He’s a memorable boil-covered horror.

I’d have liked a look at Jodorowsky’s Dune, robot Dali and all, but when several enthusiasts plead that Jodorowsky’s Dune is the greatest movie never made, it’s hard to see how.  The industry is replete with noble skeletons.  Look upon their works, ye Mighty, and despair: several of Welles’ own projects, including Heart of Darkness.  Von Sternberg’s I, Claudius.  The proposed Pale Fire Donald Cammell (of Performance) tried to get off the ground.  There’s Kubrick’s Napoleon, Soderbergh’s A Confederacy of Dunces, Ray Harryhausen’s Force of the Trojans, even Jerry Lewis’ The Day the Clown Cried.  But if Jodorowsky’s version of Dune had lived, would it have been something that transformed the cinema scene?  Or would it today be just a punchline on The Venture Brothers?

Richard von Busack is a staff writer at San Jose’s Metro Newspapers. He’s the author of The Art of Megamind and has written for Entertainment Weekly, n +1 and cinematical.com. 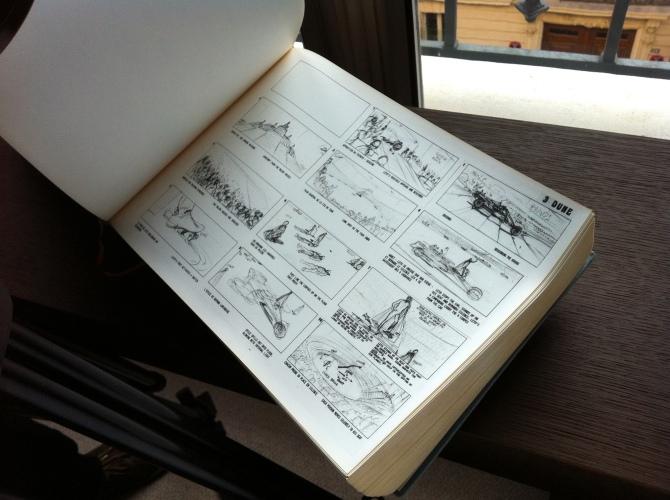 Some films exist in an entirely different dimension, unmade except in the imaginations of the filmmakers who tried to make them and failed, and the critics and cinephiles who longingly reminisce over what could have been, but wasn’t.  A lost masterpiece of world cinema or a thankfully averted disaster of epic proportions?  We can’t know one way or another for certain, of course, but given what we do know about Alejandro Jodorowsky’s mid-‘70s unsuccessful adaptation of Frank Herbert’s ground-breaking science-fiction novel Dune, perhaps it was (and is) better left unmade, living on through the work of his key collaborators on other, subsequent film productions or through the imaginations of critics and cinephiles, including director Frank Pavich whose gripping, enthralling documentary, Jodorowsky’s Dune, pays respectful homage to Jodorowsky as a filmmaker and his ambitious—some would argue hubristic—attempt to turn Herbert’s grand, sprawling novel into a singularly transformative, pop-psychedelic experience.

Pavich intersperses brief interviews of varying quality and insights with contemporary filmmakers (Richard Stanley, Nicholas Winding Refn), and film critics (Drew McWeeny, Devin Faraci) with a far more intriguing long-form interview with the surprisingly spry, anecdote-rich Jodorowsky (he’s 82).  Pavich briefly explores Jodorowsky’s upbringing in Chile, his experience as a leading avant-garde theater director in Mexico, his turn from the theater and into feature filmmaking, including El Topo in 1970 and The Holy Mountain three years later (both midnight sensations), before turning to Jodorowsky’s failed Dune project.  Jodorowsky goes into great detail, discussing his first meeting with Michel Seydoux, a producer and fan of Jodorowsky’s work, selecting Dune as his next project despite not reading Herbert’s novel, freely adapting the novel into a lengthy screenplay better suited to a miniseries than a feature film, and filling out the core team of what he calls “spiritual warriors.”  Jodorowsky truly believed (and seems to still believe) in the almost magical power of the cinema to change and reshape the lives of moviegoers, not just temporarily through a typically transient experience, but permanently.

Jodorowsky’s band of “spiritual warriors” included Moebius (Jean Giraud), a well respected science fiction comic-book illustrator, Chris Foss, an illustrator best known for creating visually arresting science-fiction covers, Dan O’Bannon, then known as the co-screenwriter and visual effects supervisor on John Carpenter’s first film Dark Star (both attended USC film school and expanded their thesis film into a feature-length film), and the late H.R. Giger, the Swiss painter and sculptor whose biomechanical work would inform Ridley Scott’s Alien only a few years later.  Giger’s experience wasn’t unique, however.  Almost all of Jodorowsky’s collaborators went on to make key contributions to the science-film genre.  At one point, Jodorowsky suggests that his adaptation of Dune didn’t die so much as live on, mutated and transformed, in other, subsequent film productions.  He’s not far off, though it’s obvious from what we hear and see, including a thick book filled with storyboards and concept art that Jodorowsky’s Dune would have been, if nothing else, a moviegoing experience like nothing else.

Jodorowsky courted Salvador Dali, Orson Welles, and David Carradine for key roles, but set aside the central role of future messiah Paul Atreides for his son, Brontis.  Nepotism, certainly, but to hear Brontis tell it, exhaustively rigorous physical and mental training was a prerequisite for the role.  Regret, of course, occasionally slips through Jodorowsky’s cheerful, positive façade.  For Jodorowsky, Dune represented (and still represents) the peak or summit (or “holy mountain”) of his filmmaking career.  Jodorowsky, though, continued making films.  He went on to direct Tusk in 1978, he would only direct three more film: Santa Sangre in 1989, The Rainbow Thief a year later, and after a two-decade hiatus, The Dance of Reality (released in Europe last year, stateside this year) [Ed. Note: Jodorowsky’s The Dance of Reality begins its Landmark engagement on Friday, May 30].  Jodorowsky also continued to write comics, reusing some of the discarded ideas from Dune.  It’s Jodorowsky’s unsuccessful attempt, however, to adapt Dune that continues to both haunt and inspire him.

Mel Valentin hails from the great state of New Jersey. After attending NYU for his undergrad (politics and economics major, religious studies minor) and grad school (law), he decided a transcontinental move to California, specifically San Francisco, was in order. Since Mel began writing nine years ago, he’s written more than 1,600 film-related reviews and articles. He’s a member of the San Francisco Film Critics Circle and the Online Film Critics Society.