The idea of programming film noir festivals for a century-old San Francisco art theater sounds like a dream of a gigbag and for 99% of the ride it is. But it’s a little bit like being turned loose in a funhouse with no exit because ultimately it can lead to bouts of insomnia and chronic fits of frustration. It can lead to indigestion and other forms of irritability. But in the end it can also remind you that patience and stamina, although usually in short supply, will win the day.

I Wake Up Dreaming 2014. Festival poster by Mark Stock.

When I began programming at the Roxie back in 1990 I came to the job with absolutely no experience at all. I had spent a considerable amount of time at the Roxie as a paying customer from the time they re-opened their doors in 1976, but the idea of ever working there (or any other movie theater for that matter) had never seriously crossed my mind. I actually used to wonder how people who worked at theaters like the Roxie got by; there never seemed to be much solvency on display there. But the Roxie was on a long list of San Francisco theaters in the mid-70s that routinely played great older films as well as a wild mix of experimental art films and documentaries. You could literally be in a different theater seven nights a week and never be bored by the amazing films constantly on view. I had also spent the previous ten or twelve years toiling around town as an independent filmmaker who, by age forty had only managed to come up with a handful of short films and a sudden career crisis. This represented a sad closing to a particularly exciting time for me and moving on meant lucking into a job at the Roxie.

From the beginning of my time at the Roxie I thought of nothing else than putting together a big film noir show. As a lifelong compulsive list maker, with a manic pre-occupation for noir, I was armed with hundreds of double-bills, scribbled neatly on yellow notepad pages. Turning the Roxie into a 365-day-a-year film noir repository would only become fractionally true, but  that would wind up being more than enough. And it would take over a year before I could convince anyone else of the concept.

Great film noir revivals were commonplace in San Francisco in the 70s and 80s. The Roxie itself, while under the watchful eye of Peter Moore and Anita Monga, played tons of great noir (including my own 12-minute noir short BLIND ALLEY), as did the Castro, the York, and countless other smaller houses around town (now long gone) like the Surf, the Times, the Gateway, the Cento Cedar, and (God help us) the Richelieu. These were the theaters that introduced me to the mysterious wonders of seeing film noir on the big screen. This was the world that interested me the most and it was the world that I was now about to engage in.

My first real opportunity came in the summer of 1991. After staging a successful one-off noir night at the Roxie in June, I was given the go-ahead to mount a month-long festival for September. A festival of this scope, with daily program changes (all double-bills of course) is a logistical nightmare and I’m sure if I knew what I was in for, I might have lowered my sights somewhat. But I’m glad I didn’t. The ensuing press was phenomenal and the crowds lined their way around the block night after night, all month long. The juggernaut of noir had arrived full-blown at the Roxie and there would be no turning back now. 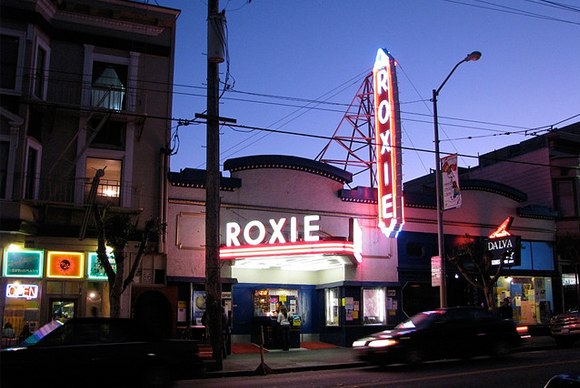 Since that time I’ve been nothing less than blessed. With its renewed reputation restored, the Roxie would soon earn the nickname “the palace of noir,” at least to those who religiously attended screenings of long-forgotten obscurities, dust-laden artifacts from the shadow factories of poverty row, now collectively and popularly known as film noir. Studios at that time were more than wiling to make the effort to find that rare print that you couldn’t live without programming. It was almost as if “ask and ye shall receive” had become the unofficial industry maxim; a flood of films were washing up on the Roxie’s shores, dazzling and bedeviling San Francisco audiences with classics and curios alike; it felt like the 70s again.

This wonderful condition—a great availability of studio-owned 35mm prints of all kinds of films from every era–has persisted into the 21st century, but is now rapidly evaporating before our eyes. For a variety of reasons (mostly economic) several major studios have completely (or nearly so) abandoned 35mm print distribution on classic (era) titles, the only other option being digital projection, whether DVD, BluRay, DCP, or any other variants. Initial outrage on the part of exhibitors and programmers was matched with equal ferocity by members of the viewing audience. For many, the fight was on against the onslaught of digital technology. And while individual battles are still being waged on that front, the actual war itself is over. Digital technology has officially encroached itself into the arena of motion picture theatrical projection. The latest Woody Allen picture? Chances are excellent that if you saw it you saw it projected digitally (DCP). Virtually any documentary you see in ANY theater will be projected digitally; the vast majority of them are shot digitally. So it only makes sense that digital technology will find its place in the world of repertory cinema.

Which brings us to 2014 and this year’s installment of I WAKE UP DREAMING, my annual film noir soiree at the Roxie in San Francisco. Acknowledging the steadily decreasing number of available films from the studios was only part of this year’s dilemma. As most know, the Roxie is a struggling non-profit entity, and its very existence is one of great fragility. Imposing a costly festival like what I’ve been accustomed to doing suddenly didn’t seem to conform to the current paradigm. I needed to scale down but without sacrificing the inherent quality and charm of these programs. At first I thought I might be able to integrate a handful of digital versions into the lineup; I’d been doing it for the past three or four years to wonderful effect. No one in the audience seemed to notice the difference and the films themselves were received very warmly. The Roxie is fortunate in that its digital projection is stellar, notably so. I gave it some more thought and finally decided to go full throttle and program an entire series on digital, partly to prove a point, but mainly to test the waters. These films look fantastic projected digitally at the Roxie and I’m determined to see them have their day in the court of public opinion.

And that is where the Warner Archive comes in. I contacted them directly and discussed the possibility on an “all Warner Archive” film noir program—a full ten days, thirty films in all—and all projected digitally! Happily, they embraced the idea from the very start and we were off and running. The result, as it turns out, is a program that offers many rare noir films that haven’t been seen theatrically in decades. Even in the halcyon days, there were no serviceable prints on some of these films and they could never be programmed. But today, digital versions exist on almost everything thanks largely to cable television. Which means if a theater is prepared to run digital, it suddenly finds itself staring down at an almost unlimited library of films to play.

It’s an amazing revelation, really, one that shines a substantial ray of hope on the renewed thought that repertory theatrical programming, almost on the verge of extinction, might somehow regain its rightful place in our popular culture. And it’s a simple  truth: without digital technology, repertory cinema as we’ve always known it, will be dead. I WAKE UP DREAMING 2014 – Dark Treasures from the Warner Archives, our first all-digital film noir festival runs from this Friday, May 16 to Sunday, May 25 at the Roxie. Funny how these dark and indelicate little decades-old films could easily become the forgotten foot soldiers of the new digital repertory revolution.

Some festival highlights: I’m running the “first noir,” STRANGER ON THE 3rd FLOOR (1940) on opening night, and the film that is thought of as the “last noir,” BRAINSTORM (1965) on closing night. In between you get films like John Brahm’s THE LOCKET, a pair of Cornell Woolrich tales (FALL GUY and THE UNFAITHFUL), Nicholas Ray’s A WOMAN’S SECRET, Tod Browning’s final film, MIRACLES FOR SALE (1939), some great pre-code crime thrillers like LADIES THEY TALK ABOUT, TWO SECONDS, and 20,000 YEARS IN SING SING, a pair of Fritz Lang films (WHILE THE CITY SLEEPS and BEYOND A REASONABLE DOUBT), Budd Boetticher’s THE RISE AND FALL OF LEGS DIAMOND…and so many more!

Elliot Lavine has been an active participant in the Bay Area film scene since the mid-1970s, first as a filmmaker, then as a programmer for the Roxie starting in 1990. He also teaches film studies courses for Stanford’s and San Francisco State’s continuing education programs.