For year people have asked where my house of worship was and my answer has always been, “In a movie theater.”

And for 40 years the San Francisco Jewish Film Festival has been bringing people together—those who belong to a synagogue, the unaffiliated and everybody else interested in fascinating stories, social justice discussions, and often controversial narrative and documentary movies from around the globe.

But why is this year different from all other years? Ironically, because of a very real plague that keeps us from gathering together in person. The Festival has a year-round streaming program, one of the first festivals to try the concept. Somehow nobody before seems to have come up with the moniker “Cinegogue” until the Jewish Film Institute named their streaming program. Their experience made it possible to offer a mostly Virtual Film Festival.

Following Thursday night’s smashingly successful opening night at two bay area drive-in theaters where people watched from the safety of their cars, there is a “Cinegogue Summer Days” weekend of terrific movies you can watch in your home on the device of your choice. We suggest hooking up your biggest screen to experience the offerings. 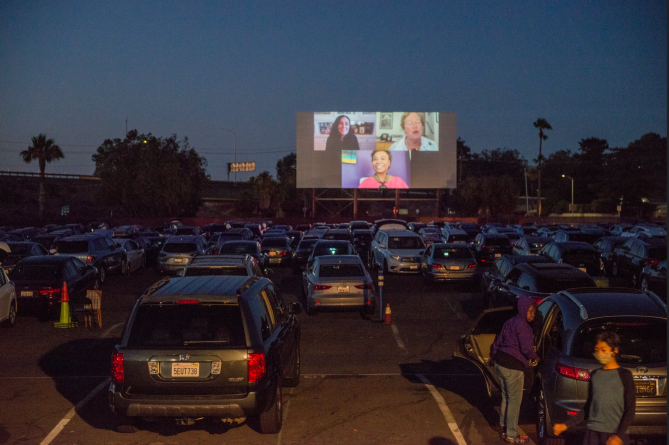 Courtesy of the SFJFF

Following Thursday night’s smashingly successful opening night at two bay area drive-in theaters where people watched from the safety of their cars, there is a “Cinegogue Summer Days” weekend of terrific movies you can watch in your home on the device of your choice. We suggest hooking up your biggest screen to experience the offerings. There are tech tips at the end of this article.

Things kicked off with Truth to Power: Barbara Lee Speaks for Me, Abby Ginzberg’s complex story of the long-running Representative who has firmly fought for human rights, peace, and equality in the U.S. Congress. The movie explores early life challenges that motivated her work to improve the lives of others, a commitment that Lee has carried on throughout her career, inspiring others, many appearing in the film including Representatives Alexandria Ocasio-Cortez, John Lewis, Ayanna Pressley, Senator Corey Booker, actor Danny Glover, and author Alice Walker. Check the film’s website for news of upcoming showings.

The other Drive-In opener was On Broadway, a celebration of the many actors, producers, and composers and the more recent drive to make the Great White Way less white and more inclusive. Ian McKellen says in his interview, trying to describe the force of Broadway… “Come on, come in, come here… I’m going to give myself to you and you’re going to come and love me.” The film features memorable performances by Lin Manuel Miranda, Patti Lupone, Bernadette Peters, James Earl Jones, and Mandy Patinkin in a film directed by Academy-Award nominee Oren Jacoby.  It can be rented online and follow when it will show again, possibly available via JIF, on Twitter.

From July 16-19 you can watch the features and shorts. Two Friday morning events are expected to be available again for streaming after the Festival.

#ZoomChallahBake was hosted by Emmy-nominated filmmaker Tiffany Shlain  who has been doing a very popular #ZoomChallahBake every Friday since the pandemic began. Each week she brings on special guests to talk about everything from the pandemic to the protests to technology and art, all while making challah with people around the world. Her guests for Cinegogue Summer Days were Rabbi (/comedian) Sydney Mintz from the Bay Area and Prince Challah from Berlin. They discuss many things while teaching us how to bake challah. Past Bakes can be found on Tiffany’s website, 24SixLife.

The JFI Filmmaker Residency Showcase featured filmmakers Nora Mariana, Theo Rigby, Eva Ilona Brzeski, Yoav Potash, and Charene Zalis who presented clips and trailers of their works in progress and shared insight into their creative process in a conversation moderated by programmer Joshua Moore. I am anxious to support and see each of these intriguing works. More can be read about them at the JFI Filmmaker Residency page.

All of the films except Broken Barriers are free and most will be available to watch at your convenience through Sunday night. To participate in virtual Q&As you should start watching at the official start times. The following notes are excerpted from the Festival’s program. The link at each title will take you to more in-depth descriptions, times, and “ticket” links.

IRMI -In 1906, Irmi Selver was born into a comfortable Jewish family in Chemnitz, Germany, where she grew up, married, and began her own family. Nothing prepared her for the upheavals and tragedy that were in store for her, or for the many times she would have to start her life over on unfamiliar ground. IRMI is a deeply personal film made by a daughter who is inspired by her mother’s story and her spirit.

Shiva Baby– As a sugar baby, Danielle is financially pampered by her sugar daddy Max in exchange for companionship and sexual favors. When she joins her family at a shiva, shortly after leaving his house, her day takes an unexpected turn: apparently against all odds, she runs into Max with his accomplished wife and a crying baby.

They Ain’t Ready For Me is the story of Tamar Manasseh, the African American rabbinical student who is leading the fight against senseless killings on the south side of Chicago. The film explores the challenges and motivations of this fearless community leader as she works to prevent more people from being killed by gun violence.

Broken Barriers (Khavah) with “Live” Film Score– Originally released as Khavah and later renamed Broken Barriers, this 1919 silent film is the first American screen adaptation of the work of Sholem Aleichem (Tevye, the Milkman). This special one-time-only online screening features a brand new commissioned score by renowned musician Sascha Jacobsen who, along with his fellow musicians, will perform live along with the film in this can’t miss one of a kind event. Restored by The National Center for Jewish Film.

Those Who Remained– A lyrical story of the healing power of love in the midst of conflict, loss, and trauma, Those Who Remained reveals the healing process of Holocaust survivors through the eyes of a young girl in post-World War II Hungary. This beautiful, poetic, and nuanced film had its US premiere at the Telluride Film Festival and was shortlisted for Best International Feature for the 2020 Academy Awards.

When we look at current and near-recent TV offerings is it fair to say there’s a “boom” of female Jewish characters afoot? In what ways are stereotypes morphing and evolving and, in pondering this, what can we learn about ourselves and the culture in which we live? Join the nation’s most illustrious and insightful television critic—New Yorker writer Emily Nussbaum—for a conversation that delves into never before charted territory.

Love & Stuff is a multi-generational love story. Told in the first person, in deep consultation with the past, filmmaker Judith Helfand explores the transformative power of parenting, our complex and emotional attachment to “stuff” and what it is we really need to leave our children.

Caregiver: A Love Story – Best Short Documentary Award Winner- When 59-year-old Bambi decides to forgo further treatment for her cancer and die at home, her husband Rick leaves his job to become her primary caregiver—a role for which he has no experience and little support. This powerful and personal short film shines a light on the growing strain placed on family caregivers and dares to envision a new approach. Winner of the 2020 SFJFF Best Short Documentary Award.

The Jewish Film Institue is active throughout the year. In addition to screenings and special events in the future, there are monthly free shorts plus dozens of features and  from past festivals that can be rented “on-demand.”

Become involved by joining one of the Membership programs.