Two things drew me to visit Spirit Works Distillery in Sebastopol: They serenade their barrels with music, and they have an all-female distillery team. Unusual on both counts, it was worth a trip out of town to get a closer look at the operation. As a bonus, getting there provided a scenic view of the vineyards and the acres of brilliant yellow mustard flowers that pop up every year at this time.

We were greeted upon our arrival by Emily Robin and Izzy Slovick, who would also be our guides through the spirits. Our smallish tour group eventually filled up with a family on its second visit, and a bachelor party in progress.

To begin the tour, we learned a few basic facts about Spirit Works: It is a “grain to glass” operation. All the milling, mashing, fermenting, distilling, barrel aging and bottling take place in the facility, which is located next to the Barlow, a newly repurposed apple cannery that houses local chefs, vintners and artisans. The makers make what they make, and the public is welcome to see, taste and wander.

Spirit Works owners, husband-and-wife team Timo and Ashby Marshall, came from a background in the nonprofit world. They spent years studying and learning the craft of artisan distilling, and used this knowledge to hand-craft their own brand of well-balanced whiskey and gin. With the combination of Timo’s traditional British legacy — thus the sloe gin — and West Coast native Ashby’s style, they’ve been able to create an impressive collection of spirits. As of now, this includes vodka, gin, barrel gin, sloe gin, barrel reserve sloe gin, straight wheat whiskey and straight rye whiskey. (Wheat and rye bourbon will be available in the future; the aging process takes its own time.)

Once we were inside the large distilling area, Emily pointed to a 2,000-pound bag of wheat. She explained that, after all was said and done, it would yield two barrels of spirits. They make the base alcohol themselves, and do not purchase any grain-neutral spirits.

As we’ve seen in other distilleries, Spirit Works has its own version of shiny copper stills. Spirit’s is a hybrid pot still, made in Germany, where it was tested and deconstructed before being shipped to California and put back together. The tall tower is an impressive piece of equipment.

Basically, Emily and Izzy explained, to make gin they start with vodka. Then they add the required juniper berries, along with a selection of botanicals that combine the earthy, the spicy, the citrusy and the floral: angelica, hibiscus, orria root, coriander, cardamom and hand-zested lemon and orange. 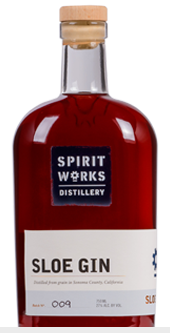 We were curious to learn more about sloe gin, a traditional British liqueur. The sloe berry is actually a wild plum, a sour relation to the damson plum. The berries are a deep blue, and resemble blueberries only in appearance, as the berries themselves are known to be “mouth-puckeringly bitter.” As its Latin name Prunus spinose implies, this is a spiny plum, treacherous to harvest. The plant is also known as Blackthorn, another indication that caution is required during harvest. Blackthorn is a tough and robust hedgerow plant found throughout the U.K.

Some say the best thing to do with sloe berries is to soak them in gin. Which is what they do here. The distillers add some cane sugar to balance the tartness. The plums infuse the gin with a rich, red color. Some say the flavor is reminiscent of cranberries, with a mixture of tart and sweet. Although we tasted it straight, it’s easy to see how sloe gin could be a good mixer. Or one can think of it as being similar to a port. Currently, Spirit Works is the only distillery in the country making sloe gin in the traditional way.

Inevitably, when you tour a distillery, you must address the issue of aging. Barrel aging, unlike just plain old aging, is a hopeful process. As time goes by, the spirits come into their own and develop flavor and depth. The fully charred New American White oak barrels in the barrel room are neatly stacked in columns and rows, ready to produce the spirits within: gin in three to four months, others taking longer. As it ages, the sloe gin becomes even more port-like, with a darker color. The charred barrels (which are delivered “pre-charred” to the distillery) give the whiskey its desired “toasted caramel and vanilla” flavor.

Since the folks at Spirit Works like to experiment and try new things, the current endeavor has to do with piping sound into the barrels during the aging process. The music plays into the barrels 24/7. We observed a crop of iPods connected to the barrels, with “what’s playing now” visible on the screen. Currently on the playlist: everything from rock and bluegrass to the Tron soundtrack, to Tchaikovsky’s Nutcracker Suite.

According to what we heard from Emily and Izzy, they can differentiate between a barrel exposed to, say, Led Zeppelin or The Devil Makes Three, and spirits that age with only the sounds of silence. I wonder if they might, in the future, offer a Bowie retrospective, or pit Queen Bey vs. Beethoven. Time will tell if the current batches of wheat and rye bourbon now aging in their barrels will reflect the musical taste, as well as the other tastes, so carefully crafted throughout the process.

When the tour drew to a close, we were directed to the tasting room, which for many visitors in our party was the main event. We were offered tastes of the current offerings. My hands-down favorite was the barrel gin. Those floral, citrus and spice elements combine to make something really special.

Thanks to new legislation that went into effect Jan. 1, tasting room visitors may actually purchase bottles of Spirit Works Distillery product, which is “a privilege we (and our visitors) have been longing for,” the Web site notes. “This is the most significant thing to happen to the spirits industry in California since 1933!” 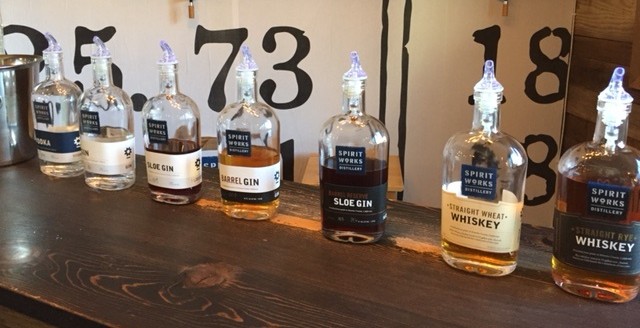 (For those interested in visiting other distillery tasting rooms, here is the language from the ABC that now allows distilleries to sell you a limited amount of the products you’ve just tasted, if the proper license is in effect: Licensees may “sell up to the equivalent of 2.25 liters [in any combination of prepackaged containers] per day per consumer of distilled spirits manufactured by the licensee at its premises to a consumer attending an instructional tasting conducted by the licensee on its licensed premises pursuant to subdivision (c) of Section 23363.1.” So now you know.)

We enjoyed our visit to Spirit Works and applaud their efforts to continue the kind of innovation we saw on our tour. I wonder if they take requests. I have a few ideas. 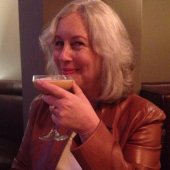 Risa Nye lives in Oakland.  Her articles and essays have appeared in the San Francisco Chronicle, The Monthly, Hippocampus magazine, and several anthologies.  She writes about cocktails as Ms. Barstool for Nosh at berkeleyside.com and about other things at risanye.com. 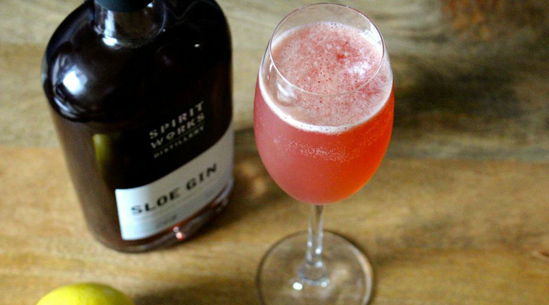 The Sloe 75 exchanges regular gin for the fruity sloe gin in the French 75.