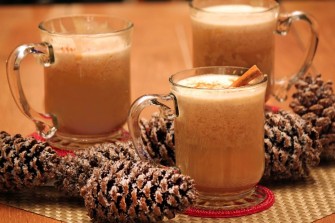 Here in the Bay Area, the rain and cold weather have finally made their presence felt — and just in time for National Hot Buttered Rum Day, Sunday, January 17. Why does this particular cold weather drink deserve its own day, you may ask. Have you ever had one? If so, you will appreciate how hot rum drinks warm the body and soul and make the long, cold, wintry nights easier to withstand. In addition, imbibing toddies and the like is a long-standing tradition in America, beginning with the earliest colonists – and a tradition well worth observing in the New Year. 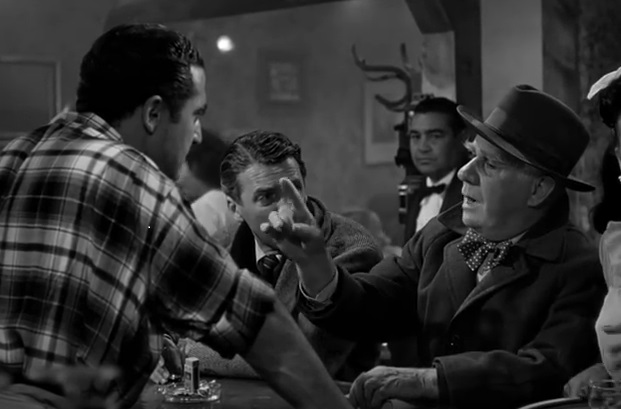 In an article by Bill Norris, noted writer, award-winning mixologist and beverage director, we learn some of the history behind the popularity of hot rum drinks:

“Imagine . . . a New England winter before the advent of double pane windows, central heat, fiberglass insulation and global warming. Think also of a subsistence diet, in which the bounty of the summer growing season is but a memory, save for what you have been able to preserve or can (or make into hooch). Think of the cold and the hunger and the long nights and the wind and snow. Toddy would seem just the thing, and the strong local rum is readily available and affordable to lighten those heavy, meager nights.

But better still would be a drink with the soporific effect of the toddy, but also the addition of something else, something with nutritional use and apt for the climate.  Something with fat.  Thankfully, there is a cow in the pasture and a churn in the kitchen, and sweet butter is one of the few luxuries available.  What happens if you plop a dollop of that butter into your hot, sweetened mix of rum and water?  The flavors round out, the rougher edges are smoothed, and the chill is further removed from your bones.”

While the exact moment someone first mixed rum, sugar, water and butter in a mug and warmed it with a red-hot poker was not preserved for posterity, Norris says the drink became a common offering in taverns throughout New England by the mid-1700s. Any neighborhood colonial barkeep could provide these readily accessible ingredients and serve up hot rum drinks to thirsty patrons — some of whom went on to change the course of history. As it turns out, rum played a significant role in the turn of events.

Amy Stewart, author of The Drunken Botanist, describes how the first colonists’ importation of molasses from the Caribbean (a “quick and easy way to make alcohol”) later turned into “an act of defiance. The Molasses Act of 1733 was an attempt to force the colonies to buy British, not French, molasses, by imposing heavy import taxes on French products.” Such laws, she writes, “only fueled the colonists’ outrage and kindled the American Revolution.” Stewart quotes a letter written by John Adams to a friend in 1818: “I know not why we should blush to confess that molasses was an essential ingredient in American independence. Many great events have proceeded from much smaller causes.” Rum: the driving force behind independence. I don’t remember this coming up in my American History class.

And by the way, when George Washington celebrated his inauguration in 1789, he insisted that rum be part of the festivities, demanding that at least one barrel of rum had to be from Barbados in order to get the party started.

In his recent book, Drinking the Devil’s Acre: A Love letter from San Francisco and Her Cocktails, author, barkeeper, educator and “true champion of the cocktail,” Duggan McDonnell directs our attention to San Francisco’s Smuggler’s Cove: “. . . this quintessential San Francisco institution is more than just a place to marvel at the lively mix of tiki and nautical décor. It . . . is the academic hub of rum on the West Coast.” If you want to be able to advance your knowledge and sample rum from around the world, this would be the place to start your research.

Martin Cate, Smuggler’s Cove owner and authority on all things rum, declares, “There just isn’t a more fascinating spirit in the world . . . . Revolution, triumph, piracy, war, sailors, celebration, and unspeakable human tragedy are in every glass. No other spirit has the history or the versatility.” Duggan elaborates on this theme when he writes:

“Although it is not the first spirit of the Americas, it is connected to the movements of its people more than any other spirit, and its history cannot be separated from its politics, from the shame of the old slave trade and the leveraging of economies in developing countries. Rum is the spirit of the Everyman, and it just may be the distillate from which more cocktails have been invented than any other.” 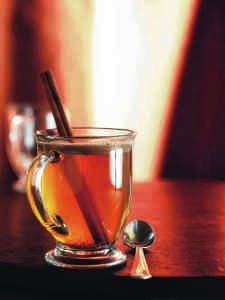 And we have Trader Vic Bergeron and Don the Beachcomber to thank for many of them.

Another chapter in rum’s history takes us back to the days when British sailors demanded “proof” that their daily ration of rum hadn’t been watered down by a penurious captain. Lacking modern hydrometers to accurately measure the alcohol content in their precious “tots,” they devised a fool-proof way to test the rum’s alcohol potency: they mixed it with gun powder and tried to set it on fire. By trial and error, one presumes, they determined that rum containing about 57 percent alcohol would catch fire — anything less would not ignite, and would prove that the rum had been diluted. In the U.S., 100 proof is the equivalent of 50 percent alcohol, but in the UK, 100 proof still stands at 57 percent. Some rum distillers offer a “navy strength” version, which uses this standard. (The practice of rationing rum to British sailors was finally discontinued, but not until nearly 50 years ago.) Today, there is no need to bring along gun powder to verify proof; simply read the label or ask your bartender.

What about celebrating Hot Buttered Rum Day with an ice cream cone instead? You may think that cold hot buttered rum is an oxymoron. However, Little Giant Ice Cream in Oakland’s Uptown serves a frozen boozy treat that manages to translate the flavors of a hot drink into a cold scoop: with cinnamon, nutmeg, ginger and Meyers’s rum blended into a base of milk, cream, sugar and eggs, this inspiration is the best of both worlds. When the storms pass and the sun reemerges, perhaps a double serving of this rum-based treat will do the trick.

As the legendary Don the Beachcomber once said, “What one rum can’t do, three rums can.” Try it and see.

Respect the history, celebrate the libation, and raise a warm mug on January 17.

Risa Nye lives in Oakland.  Her articles and essays have appeared in the San Francisco Chronicle, The Monthly, Hippocampus magazine, and several anthologies.  She writes about cocktails as Ms. Barstool for Nosh at berkeleyside.com and about other things at risanye.com.

Recipes that contradict each other, but are both delicious

A Recipe: Hot Buttered Rum (original) by Bill Norris (from Your Guide to Drinking This Weekend) 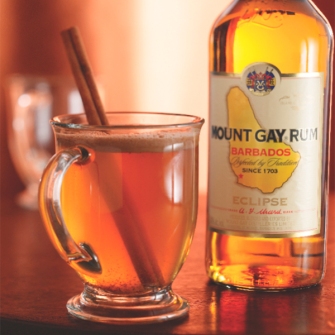 Rinse a heat-proof mug with very hot water to warm it.  Add rum, sugar, water and a hazelnut-sized piece of butter (about 2 tbsp). Remove a hot poker from the fire and plunge it into the mixture until it begins to bubble. Remove poker and stir to combine ingredients. Top with fresh grated nutmeg if you wish (and you should wish).

If hot pokers are unavailable: Rinse a heat-proof mug with very hot water to warm it. Add sugar to the mug and top with about an ounce of boiling water.  Stir to dissolve sugar. Add rum, the remainder of the water and a hazelnut-sized piece of butter (about 2 tbsp). Top with fresh grated nutmeg if you wish (and you should wish).

When making Hot Buttered Rum, choose a good quality butter and make sure it is unsalted.  While salted butter is delicious on toast, it clashes in this drink.  Many modern recipes also call for whipping the butter with a sugared spice mix.  On this, there is decided disagreement. Many find the combination of rum, butter, sugar and spice delicious. Purists, like David Wondrich, urge you to “resist the impulses to make a butter-sugar-spice batter or use cider rather than water. In Maine, that would mark you as a Communist.” 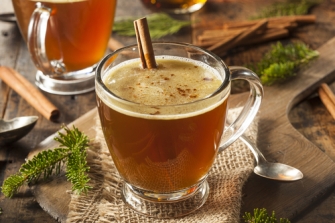 Cream butter, sugar, salt and spices together until smooth and fluffy. Refrigerate until needed.

The books mentioned above can be purchased at your local bookstore or through our affiliate programs.

One thought on “Hot Buttered Rum: Official Drink of Presidents Nos. 1 and 2?”