When everyone regrouped in London, tensions were still high between the two men. Casting was finalized during this period, but not before a large dinner at Huston’s private club with some of the production staff and other friends of Huston’s, including the silent film stars Bebe Daniels and her husband Ben Lyon, who had become television entertainers in the U.K. since leaving Hollywood. This group included Jeanie Sims; Lorrie Sherwood; Peter Viertel; Richard Brooks, who had been Huston’s cowriter on Key Largo in 1948; and Jack Clayton, who would go on to direct Room at the Top, The Innocents, and, eventually, Bradbury’s Something Wicked This Way Comes.

But this evening was heavy with ghosts from seasons past. The events that followed became one of Bradbury’s most celebrated anecdotes, and the magnitude of this tale was apparent in the way that each participant brought slight variations to each telling down through time. Huston was in a dark mood, for the flight had aggravated a recent back injury. During dinner he started in on everyone in turn. He began to disparage Bradbury’s friends the Probsts, in absentia, and his fear of flying. When Bradbury thanked the waiter with his habitual “God bless you,” Huston demanded that he stop blaspheming and shouted, “What do you mean, ‘God bless you’? Are you the Pope?” He started in again on the Probsts, and at this point Bradbury cut him off with a profanity. Peter Viertel helped calm Bradbury, but more words after dinner led to a scuffle outside. Huston threatened to throw a punch and Bradbury offered to take it; Viertel remembered later that an elderly lady standing nearby, unaware of the cause of the fight, assured them all that there was no need to fight over a cab at that hour. Jack Clayton managed to get Huston into a cab; Viertel pulled Bradbury away and helped negotiate a meeting with Huston in the morning.

Illustrations from Moby-Dick, published in 1851 and authored by Herman Melville.

Both Viertel and Lorrie Sherwood, among others, felt that Huston had pushed Bradbury too far. Huston probably knew this, but he also knew that he needed Bradbury for the final revisions and agreed to make amends in the morning. In fact, he appeared to be rather proud that Bradbury had stood up to him outside the restaurant. In these last London weeks, out from under Huston’s tyranny and the endless rain and cold of Dublin, Bradbury was able to rewrite the final third of the script. This new focus, along with the sea chanteys he had been composing at intervals throughout the winter months, helped him feel a new closeness with Melville during the final weeks of work in London. Bradbury worked from his room in the Mount Royal Hotel, commuting only when necessary to consult with Huston at the Moulin Productions offices. On Sunday, April 2nd, Bradbury had his best writing day of all and rewrote the final 36 pages (the typhoon and the final lowering of the boats) in a single eight-hour stint: “That last Sunday, I felt more like Melville than any other time in my whole experience. . . . [I]t came right, it came absolutely right.” On this day he also took his earlier deletion of Fedallah’s role to its logical final step and transferred his fate to 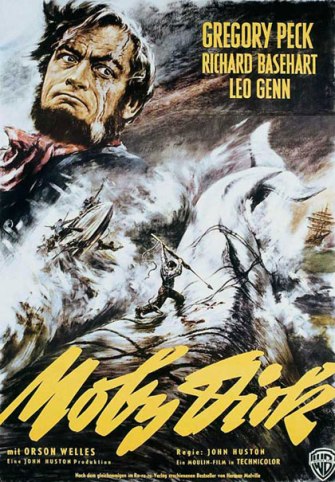 Ahab: “My inspiration was to have Moby Dick take Ahab down and wind him in the coiled ropes and bring him up among the harpoons on this great white bier, this great cortege, this funeral at sea. Then we see, ‘My God, these two should be together forever through eternity, shouldn’t they—Ahab and the white whale?’ It’s not in the book, but I do believe that Melville would have approved.”

Here was a final Bradbury touch that soon worked its way into film culture as if it were authentic Melville: “The tidal motion causes [Ahab] to gesture and the men look, and one of them says, ‘Look, he beckons, he beckons.’ That’s not in the book. . . . Even though he’s dead, he’s able to destroy them with his madness. I’m so proud of that.” Years later, in his 1968 novelization of 2001: A Space Odyssey, Bradbury’s friend Arthur C. Clarke even developed an allusion to this scene as Dave Bowman sees Frank Poole’s arm “wave” while he oscillates lifelessly at the end of his tether: “Poole’s gesture was an echo of Captain Ahab’s when, lashed to the flanks of the white whale, his corpse had beckoned the crew of the Pequod on to their doom.”

In a most creative way, then, Bradbury had convinced himself that he was Melville, at least for the eight hours it took to type those last 36 pages of script. He drew on the same form of willpower, verging on self-hypnosis, which had allowed him to silence the warnings of his wife and even his own rational mind as his working relationship with Huston became more and more untenable. And in the end, he was able to turn this illusion to great comic effect in Huston’s very presence: “When I ran across London I threw the script in John Huston’s lap and said, ‘There! I think it’s finished! All in one day!’ He read it and said, ‘My God, yes! What happened?’ I said, ‘Behold! Herman Melville stands before you!’ And then I added, ‘But look quickly, because he’ll be gone in five minutes!’ ”

Bradbury completed a few final revisions by April 14th with a sense that he had paved the way for a quality production. Peter Viertel, who was sad to see Bradbury leave the crew, agreed. In all, Bradbury had prepared more than thirty outlines and 1,500 pages of text, and left a final script that was still 150 pages long. He had ribbon or carbon copy for his drafts and discards, and Lorrie Sherwood kept copies of his principal drafts for reference in preparing the initial shooting script. He parted on good terms with Huston, who was now assembling his cast and finalizing plans for the location filming. Bradbury knew that revisions and script cuts during the shooting stage were inevitable, and he assumed that he would be able to send revisions even though he was no longer on contract. But in the afterglow of a job well done, Bradbury was anxious to rejoin his family in Italy and made no formal arrangements for further work on the script. He did, however, make one final gesture of reconciliation that would come back to haunt him. The last time he saw Huston, they exchanged gifts (a silver bowl from a shop in the Regent High Street for Hu 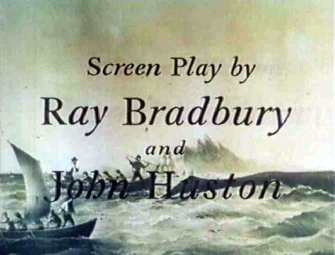 ston, and a silver fish charm for Bradbury), and then Bradbury offered to share the screen credit in return for everything he had learned from Huston about shaping and focusing a script. Huston thanked him but declined, and that was all Bradbury ever expected to hear on the subject.

From Ray Bradbury Unbound. Copyright 2014 by Jonathan R. Eller. Used with permission of the University of Illinois Press.
Available from your local bookseller or via Amazon or Indiebound. 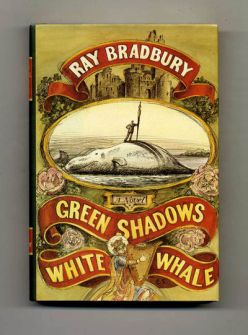 Bradbury wrote a novel based on his experiences, Green Shadows, White Whale: A Novel of Ray Bradbury’s Adventures Making Moby Dick with John Huston in Ireland (via Amazon or Indiebound).

A fascinating essay with many valuable links about working with John Huston on writing the screenplay for Moby Dick is found here.

An excellent published edition of the screenplay is also available.

And you can rent or buy John Huston’s film starring Gregory Peck and Orson Welles.