It’s been 40 years since Lily Tomlin’s spectacular film debut in Robert Altman’s Nashville as a demure gospel singer who gives in to temptation. She marks the occasion with a performance as the titular character in Paul Weitz’s Grandma that is among the very best in her career. Tomlin’s Elle Reid is a poet, lit professor, mother, grandmother, and still-grieving widow whose recent attempt to move past her sadness and anger over losing her partner of nearly four decades has backfired. Elle is done with people and tries to push them away until they are done with her. But when her granddaughter Sage (Julia Garner) shows up asking for help in a crisis, Elle’s misanthropy melts.

Julia Garner as Sage and Lily Tomlin as Elle in Grandma. Photo by Aaron Epstein, courtesy of Sony Pictures Classics.

What the teenager wants is $600 for an abortion, and she needs the money right away. But unemployed Elle, who recently cut up her credit cards—a weak running joke within the film—doesn’t have it. Estranged from her Type A daughter Judy (Marcia Gay Harden), Elle gets why Sage has come to her instead of to her mother, but giving solace to a panicked 18-year-old is not in her comfort zone.

The late Vi would have known exactly what to say to Sage. Absent that, Elle can only express her love for her granddaughter through action, pulling Sage along in Vi’s beloved 1955 Dodge Royal (Tomlin’s own car) on an odyssey through Los Angeles that starts with a visit to air-headed baby daddy Cam (Nat Wolff), but then evolves into a kind of This is Your Life, Elle Reid edition. Among the people that fill the day, whether she’s asking to borrow money from them or not, are tattoo artist Deathy (Laverne Cox); café owner Carla (the late Elizabeth Peña, killing it in one of her final roles); Olivia (Judy Greer), a young woman with whom Elle has (a very recent) history; and Karl (Sam Elliott, as hot as ever at 70), a now-rich man with whom Elle shares a turbulent past.

Writer/director Weitz, who previously worked with Tomlin on the 2013 comedy Admission (in which she played Tina Fey’s mother), wrote Grandma for her, and he has gifted her with a full-bodied character to inhabit. Tomlin embraces Elle, and her sour, contradictory nature, delivering a warts-and-all performance made all the more remarkable by the way she creates empathy for a woman who does her level best to reject such soft emotions. For someone who spends a good part of her day hectoring Sage about what she knows and doesn’t know, Elle has a lot of lessons to learn herself.

With two generations separating Elle and Sage—and Judy and Olivia occupying Gen X in the middle—the film is set up as a kind of measure of what Elle fought for as a Vietnam War-era feminist, and how aware young Millennials like Sage are of the work that the women of Elle’s generation (and before) did. The abortion the pair discuss so matter-of-factly was illegal, of course, when Elle was Sage’s age (and will be again if some get their druthers). 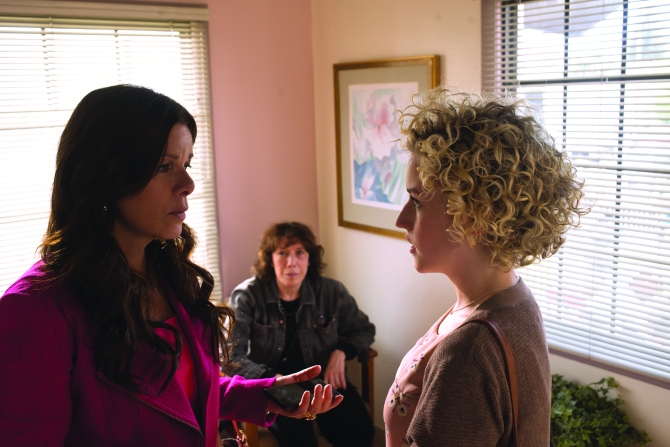 But Sage’s situation is simply what kicks off this slim — Grandma clocks in at 79 minutes—exploration of women’s lives, family dynamics, and one remarkable, if cranky, character. It’s often hilarious. Tomlin and Garner make a nice double act. A café argument between Elle, Carla, and Olivia is not only uproarious but with it, Tomlin, Peña, and Greer deliver a master class on comic timing. Elle’s grief for the woman she loved has left her in a kind of limbo. Confronting her past while helping her granddaughter might just be the thing that helps her move forward. Watching Tomlin embody this sometimes impossible woman is pure pleasure.

GRANDMA: One Day in LA;

I wish we all had grandmothers like Lily Tomlin’s character, Elle Reid, in Grandma. Elle is a published poet of some note—now, with writer’s block, making her living as a writer-in-residence at colleges around the country. She’s intelligent, foulmouthed, tough, but capable of tenderness, fiercely loving, and fierce when protecting her family. Elle is exhausted and mired in grief over the long illness and death of Violet, her spouse of over thirty years. In public, Elle endures stoically, even to the point of trying out a new relationship, but in the cloister of her shower, she sobs heartbreakingly. Aging and alone, she perseveres.

Paul Weitz’s brilliant film, a Sundance and Tribeca favorite, takes place over the course of one day in Los Angeles. But in that short time, we grow to understand Elle’s inner life, and gain insight into her newly pregnant granddaughter, high school senior Sage (Julie Garner, The Perks of Being a Wallflower, TV’s The Americans) and Elle’s high-powered daughter Judy (Marcia Gay Harden).

The realistically portrayed relationship among the three women is admirably written and acted. And a fourth woman is very much a character in the film. Recently deceased “Grandma Violet,” described as softer and more traditionally maternal than Elle, was a mother to Judy and is missed by all.

Granddaughter Sage shows up unexpectedly at Elle’s house first thing in the morning. She’s pregnant, broke and needs money for an abortion that has been scheduled for 5:45 p.m. that day. In the only contrived note, obviously written for the plot to make sense, a temporarily-broke Elle has paid off her credit cards, cut them up and created a mobile with the slivers. And neither woman wants to approach Judy, fearing her angry reaction.

Never judgmental, Elle drives Sage around LA trying to raise the needed $600, first from Sage’s stoned loser boyfriend (Nat Wolff). When he insults Sage by expressing doubt about his fatherhood, Elle hits him hard in his crotch with a bat, to mild audience applause. Anger issues? Yes, Elle has them big time. She takes his stash of weed and his last $50 and off they go, like feminist versions of Don Quixote and Sancho Panza on a 21st century quest.

As the day wears on, we meet some of Elle’s friends (with great cameos by Laverne Cox and the late Elizabeth Peña). Each visit takes Elle back further in her life, until they visit Karl (nice acting by Sam Elliott), whom Elle hasn’t seen for 30 years. Karl and Elle bitterly dissect a divisive turning point in Elle’s early adult life. With time running out, Sage and Elle wind up at Judy’s downtown law firm, in a scene that is part funny, part sad, and all too human.

Grandma is a wry, sparsely written film with realistic dialogue that never veers into mawkishness or moralizing. The film’s pro-choice orientation is clear from the outset. The difficulty of Sage’s predicaments is neither underplayed nor overwritten.

Although the acting is uniformly first class, the great Lily Tomlin’s performance is award-worthy. And Paul Weitz has matured well past his early successes with American Pie and Antz. In Grandma, his direction is controlled and his writing is subtle. Shot in 19 days in Los Angeles, the film is an elegant glimpse into the life of a complex character facing difficult issues with all the humor and strength she can muster. It’s a winner.

Emily S. Mendel is a writer and photographer. As a native New Yorker (although now a longtime East Bay resident), Emily grew up exploring film and studying theater from Broadway to Off-Off-Broadway, as her mega-volumePlaybill collection attests. Ending her 30-year law practice has given Emily more time to indulge in her love of the arts and travel. She reviews art, film, television and destinations as a regular contributor to culturevulture.net, reviews theater as a regular contributor to Berkeleyside, and reviews film as a contributor to EatDrinkFilms.