When I saw that Flesh and the Devil was screening as part of the San Francisco Silent Film Festival I wanted to hightail it straight to Heathrow to get on a plane.  I would love to be at the Castro Theatre watching the world’s greatest screen lovers getting all lovey-dovey on the last Sunday in May.

Alas, I’ll be stuck in London. So instead, I shall have myself a special, private screening of this romantic classic, with a Garbo-Gilbert themed dinner to follow. But if you are lucky enough to attend the screening, this dinner and film combo makes for a perfect Silver Screen Sunday. Dreamy.

One of my favorite film star cookbooks is Eggs I Have Known , written by silent era actress Corinne Griffith. The book is peppered with great tales of her life in Hollywood and beyond, and one of these vivid reminiscences features Garbo and Gilbert.

Greta and Corinne landed in Hollywood about the same time, Garbo from Sweden of course, and Griffith from New York. Their first meeting was at the home of director John Robertson, at a white tie and tails affair at his home in Beverly Hills. They met at the front door, introduced themselves, and strolled upstairs to leave their coats with the two uniformed maids hired especially for the occasion. Corinne says, “Garbo’s deep-freeze voice fascinated me, her chalk-white beauty awed me” and she felt clumsy and awkward compared to the languid and sophisticated woman she believed to be “the most outstanding personality ever to grace the screen.”

Garbo “slid from her coat like a sleepy tiger stretching in the noonday sun” and took off her shoes, telling Corinne that she never wore shoes in the house. The two of them walked back to the party and “At the foot of the stairs, Jack Gilbert was waiting for her. He was terribly in love with her. We made our entrance together into the Robertsons’ drawing room, she in her stockinged feet and I in my old-fashioned high heels. She strode in like a queen, while I, of course, tripped over the rug.”

7th July 1927: Swedish born American actress Greta Garbo (1905 – 1990) and her fellow actor and lover John Gilbert (1899 – 1936). The pair starred in several films together and their tempestuous off-screen relationship culminated in her jilting him at the altar. (Photo via John Kobal Foundation/Getty Images)

Corinne trotted behind Garbo in the buffet queue, carefully noting what she chose to pop on her plate and copying her precisely. “Never eat meat and potatoes at the same time,” said the queen of the screen, “It goes to your hips.” Corinne duly chose potatoes instead of meat. Garbo continued: “potatoes are so much better than meat, especially these potatoes, I gave the recipe to John Robertson. They are Swedish potatoes.” Corinne plucked up the courage to say, “But I thought all white potatoes were Irish potatoes.” Garbo’s reply? “Then these are Swedish Irish potatoes.”

Peel and boil potatoes until not quite done. Remove from fire. When cool, cut into crosswise slices. Place layer of potatoes in bottom of a buttered casserole. Mix sour cream, milk and Crème de Bananes (or banana mashed by pressing through sieve). Spread over potatoes. Add layer of potatoes and remaining cream to mixture. Bake as ordinary scalloped potatoes for 15 to 20 minutes. Just before serving place under flame to brown.

Greta Garbo embraces John Gilbert in publicity portrait for the film ‘Flesh And The Devil’, 1927. (Photo by Metro-Goldwyn-Mayer/Getty Images)

Corinne reported that the Swedish-Irish potatoes were delicious but she could scarcely eat any, as she felt so self-conscious. “I kept trying to hide my well-shod feet with the silly high heels, while Garbo sat there in her stockinged feet with Jack Gilbert adoring her, and just ate and ate and ate.”

So much for screen stars always dieting! To have with your Swedish-Irish Potatoes? How about John Gilbert’s favorite chicken dish? This was featured in The Palatists Book of Cookery , published in 1933.

Use only the breast of chicken, cut in half, making six servings. Heat oil; season chicken with salt and pepper, sauté in oil until golden colored, do not over cook. Add mushrooms, washed and drained and cook five minutes longer. Remove chicken and mushrooms. Fry ham in same pan for a minute only, just long enough to brown. Add cream to pan and let mixture boil ten minutes, seasoning with salt and cayenne. 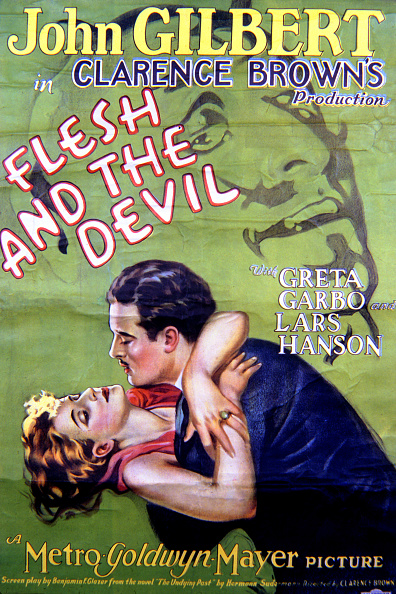 Dress chicken on toast with Virginia ham. Pour sauce over it, adding sherry to it just before you do so. Cover tightly and put into medium hot oven for five minutes then serve very hot.

*This was in the days before chicken breasts were freely available to buy already separated from the rest of the chicken! Today we could just buy 6 nice pre-prepared chicken breasts for this recipe.

**If you are serving John’s chicken with Greta’s potatoes, you may not need the toast.

A Garbo recipe in a Swedish newspaper.

Jenny Hammerton is a film archivist with a nosey parker interest in what the stars of Hollywood Golden era liked to eat and drink. She’s been scribbling away about film star recipes for around eight years at Silver Screen Suppers and her bulging collection of film star favorites now numbers over 5,500. When not cooking and writing, Jenny works with the British Movietone newsreel collection for the AP Archive in London, and DJs on a wind-up gramophone with The Shellac Sisters. You can read about and buy her new book Cooking with Joan Crawford here.