Human psychology is the ball and chain we drag with us everywhere we go, even into the Great Outdoors. Americans have long had a sentimental fondness for the assumed “rugged simplicity” of life in areas farthest flung from the clutter and neurosis of urban life. Yet isolation is no guarantee of tranquility, or even sanity. You can be in a tight spot, per se, even in the widest open spaces.

YBCA’s April series “Dark Horse: Film Noir Westerns” provides eight prime vintage examples of Hollywood locating high conflict and emotional torment in that traditionally least-complicated setting for cinematic melodrama, the Old West. From the medium’s earliest days, the western was a genre in which a wholesome, elemental morality ruled—bad guys wore black hats, good guys wore white. (Sometimes even their horses were color-coded.) DeMille, John Ford and others occasionally made epically-scaled, big-budget westerns about historic battles or the hard road westward of pioneering frontier families. But most “oaters” were cheap ’n’ cheerful exercises in ridin’, ropin’ and wranglin’ wrongdoers to justice. Major studios made umpteen “B” westerns, while “Poverty Row” outfits made yea more Z-grade ones, most of them aimed at undiscriminating heartland and kiddie-matinee audiences. Violence was soft-pedaled, psychological complexity irrelevant.

How the west was hung: Henry Fonda in 1943’s The Ox-Bow Incident.

But after World War II, the disillusionment and cynicism that fueled the explosion of tough crime mellers that we now call film noir also crept into other genres. Even the hitherto largely squeaky-clean western was not immune from these new dark shadings. Chronologically speaking, the YBCA series’ first example is The Ox-Bow Incident , which caught star Henry Fonda’s attention just after he’d made the much-praised adaptation of John Steinbeck’s The Grapes of Wrath . Attracted to similarly punchy, political subject matter, Fonda championed Walter Van Tilberg Clark’s 1940 debut novel to 20th-Century Fox. But they were wary of such a pacifist-themed story—in which angry citizens of a frontier town rush to lynch presumed cattle rustlers without much evidence, let alone due process of law—particularly just as the U.S. was wading into global military conflict. The Hays Office demanded significant changes that softened the harshly accusatory tone, making Fonda’s nominal hero more sympathetic and insisting a supporting character melodramatically pay “the ultimate price” for bowing to drunken, loutish mob pressure. 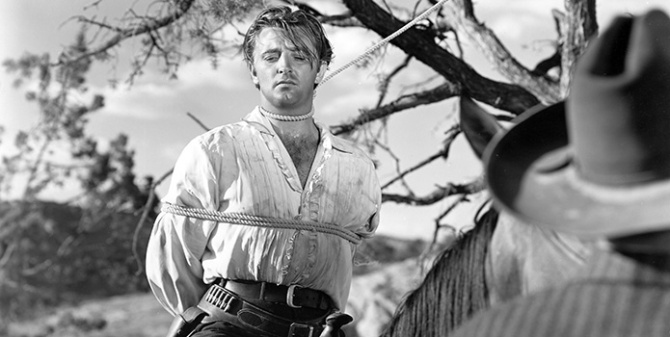 Nonetheless, as directed by industry heavyweight William Wellman and scripted by Lamar Trotti (Young Mr. Lincoln , The Razor’s Edge ) at a lean 75 minutes, this screen Ox-Bow Incident remains potent stuff. Potent enough to remain on the shelf for many long months while Fox worried whether it was too politically hot for mass consumption—though they needn’t have worried, as it ended up nominated for Best Picture amidst a chorus of critical praise, earning the studio rich rewards in prestige if not outstanding box-office. Fonda (who immediately entered U.S. military service after principal photography wrapped) always considered it one of his finest movies, alongside Grapes of Wrath . The two films also sport a more ironic overlap in that Grapes’ salt-of-the-earth Ma Joad, actress Jane Darwell, is cast here as the nastiest, bloodthirstiest hag calling for vigilante “justice.” Another memorable turn was that of Dana Andrews as the most plaintively victimized of the alleged rustlers (also including Anthony Quinn as an authority-defiant Mexican and Francis Ford as a senile old man). This guilelessly sympathetic turn sandwiched between darker ones as the gangster villain in Howard Hawks’ terrific comedy Ball of Fire (1941) and the obsessed NYC police dick in Laura (1944) suggest the now little-remembered Andrews was one of the most underrated actors of his breakthrough screen decade. 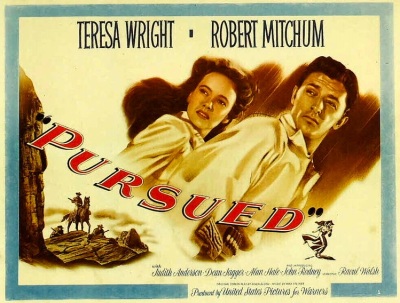 Shot mostly on soundstage sets because that was cheaper than location filming (again, Fox thought this project was a sure money-loser), The Ox-Bow Incident benefits greatly from particularly impressive photography by much-Oscar-nominated d.p. Arthur C. Miller. There’s even more striking B&W imagery, courtesy of James Wong Howe, in what is by contrast probably the worst movie in the “Dark Horse” series: 1947’s Pursued , a 1947 Raoul Walsh joint written by Niven Busch (a western specialist who had just dropped the even more purple Duel in the Sun ) that is one nadir in Hollywood’s postwar obsession with “psychology,” which it imagined as a crude series of childhood-trauma-revealing flashbacks explaining adult neurosis. If you were looking for an actor to personify such think-y melodramatic torments, possibly the very last person on the casting list would be Robert Mitchum, who here struggles to get out all his overwritten “literary” dialogue while remaining awake. (There’s a moment when the woman who’s raised him as her own child said “All the love I had for you is dead,” and Mitchum’s response to this devastation is to raise his eyebrow a quarter-inch or so.) Teresa Wright is spectacularly out of her depth as the kind of heroine whose emotional arc might be summed up as “I love you! I hate you! Oh, just take me you sexy brute!” With its florid Max Steiner score and howler of a shocking-revelation climax, Pursued is one of the most seriously silly westerns ever made. 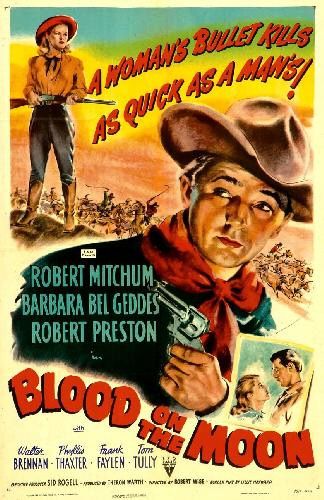 Between these poles of bitter awesomeness and entertaining awfulness, “Dark Horse” features a lot of angst-y, interesting oaters. Mitchum is on much more firma terra with future Sound of Music director Robert Wise’s 1948 Blood on the Moon , in which he’s a drifter everyone assumes is pulling some dirty deal—because, well, he’s Robert Mitchum. Big surprise, it’s actually gregarious, smarmy Robert Preston who’s the duplicitous dirtbag here. Another terrific-looking movie (shot by the undersung Nicholas Musuraca), this only gets weird with an ending in which Barbara Bel Geddes hustles Mitch into marriage … as if! Another colorfully character-rich western is Anthony Mann’s 1950 classic Winchester ’73 , about a gun that (in a groan-inducing opening scroll) “an Indian would kill for.” But actually the lone “Injun” here—an improbable but redemptively shirtless young Rock Hudson—is a lesser offender amongst kill-crazy white men including Jimmy Stewart (good) and Dan Duryea (wonderfully bad). Shelley Winters is a pip as the hardboiled dancehall gal of questionable virtue who gets in the middle of a sibling blood feud, And future “Grandpa Walton” Will Geer is a hoot as Wyatt Earp.

Black coffee and bullets: Gregory Peck in 1950’s The Gunfighter .

Winchester ’73 was a hit that helped revive the flagging western genre, largely because of its commingled suspense and humor. But there’s not much mirth in an equally excellent entry from the same year, Henry King’s The Gunfighter —a pacifist western like Ox-Bow , this one starring Gregory Peck as a gunslinger so renowned for his quick-draw that he can hardly take a breath without some idiot wanting to challenge him to prove their own manhood. Attempting to slide into a frontier town quietly to reunite with an old flame, he’s instead besieged by unwanted attention not just from obnoxious gun-happy “squirts,” but from righteously outraged ladies like Ellen Corby (the future Grandma Walton, FYI). The excitement of violence has seldom seemed sadder than in this finely judged drama. 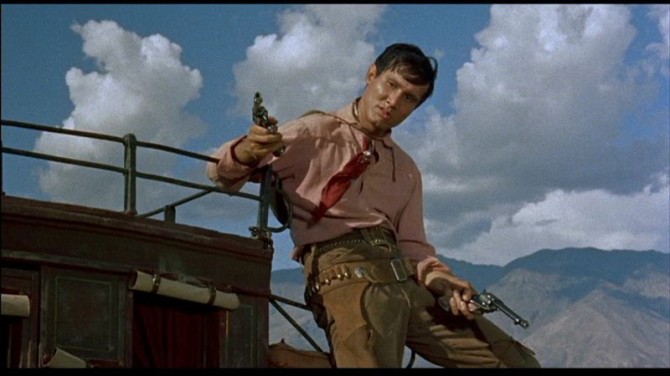 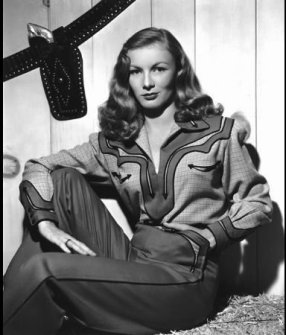 Other “Dark Horse” selections include Budd Boetticher’s 1957 Randolph Scott vehicle The Tall T , a tense, terse Technicolor thriller from an Elmore Leonard story with excellent villains, marred only by a particularly lame heroine role for Maureen O’Sullivan—who is constantly called “plain” and behaves in a pathetically girly manner even by the standards of the genre. There’s a whopper of a “Shut yer yap little missy, this big man’ll take care a-ya now” ending, as stoic Scott shows no patience for her emotional display over the fact that she’s just seen a half-dozen people killed. A decade earlier, Andre De Toth’s Ramrod had another career cowpoke, Joel McCrea, as a nice guy reluctantly pulled into dirty deeds engineered by the Lady MacBeth of the Old West, Veronica Lake. You couldn’t pry the latter silky blonde from my cold, dead fanboy hands when it comes to her stellar noir appearances opposite Alan Ladd, or her comedy partnering of McCrea in Preston Sturges’ matchless 1941 Sullivan’s Travels . But in this late chapter from her fast-fading stardom (working for her then-husband De Toth, yet), Lake is in way over her head. Her character is called Ivy, but it’s her acting that’s mildly poisonous. 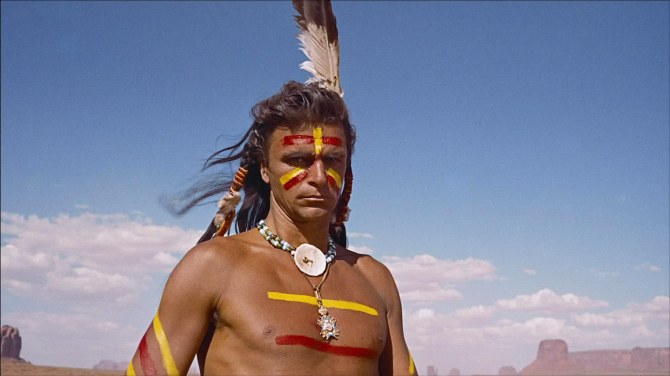 Last but perhaps least—sue me—is this YBCA series’ single most celebrated title. John Ford’s 1956 The Searchers is an acknowledged classic in which John Wayne is considered to have played his biggest “stretch” as an unabashedly racist, trigger-happy antihero who helps “halfbreed” Jeffrey Hunter avenge a slaughter of settlers over a long manhunt’s course. But even beyond its galumphing, insistent comedy, this is one of the yellingest movies ever made. Its women are hysterical, its Native Americans ridiculous and/or bloodthirsty; everyone seems to be acting as if to reach back row of the third balcony of the op’ry house. Ford made some great films. This fabled one isn’t among them. Saying so might be heresy, but like I said: Sue me.

Dennis Harvey has been publishing film reviews since the era of the typewriter. He’s a member of the San Francisco Film Critics Circle and currently writes for  Variety and Fandor’s Keyframe.