“I can’t go back to yesterday because I was a different person then.”

Afternoon Moscow Mules and Aperol Spritz in my studio.

I love cocktails. Yes, wine is in many ways my liquid madeleine, but cocktails my drug, my potion, my poison—my thread. If we can’t go back to yesterday physically, there are some liquid libations that can take us there emotionally. A cocktail is that for me. And so is a first love. But what is it about this mixture of liquor and juices, bitters, sours, simple syrups that can bring you back to those moments post-college pre-family—I’m thinking NYC 1990’s Merc Bar after Stux gallery openings, or even Bellinis at Harry’s Bar in Venice years later… Of course it’s the mixture, and even the temperature—its coolness and frothiness, its color, but maybe it’s also that hour… of twilight, a moment of rest, a threshold into the darkness that needs massaging into the rest of the night. I know now it is both a getaway with friends after I put my kids to sleep and also that in-between space a couple days a week, when I drink almost in meditation a simple Mezcal Sour, an Aperol Spritz, a Moscow Mule … like sex it can be lustful—quick and fierce in a shot, but like love it can also be drawn out with egg white; over conversation, in a beautifully lit room, is best. If we are in fact defined by who, what and how we love—what’s your poison, how do you like it, and where? 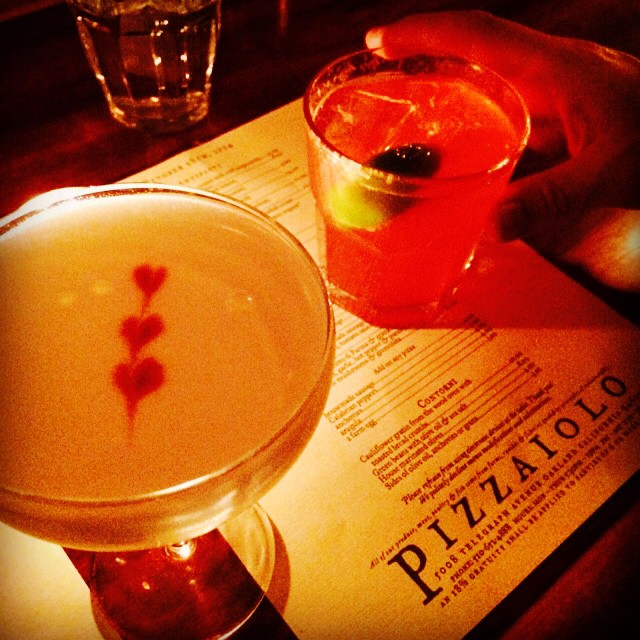 Caption: Post-Chez Panisse cocktails at Pizzaiolo (followed by The Alley).

“One should always be drunk. That’s all that matters … But with what? With wine, with poetry, or with virtue, as you choose. But get drunk.”

A Moveable Feast at Prizefighter, Emeryville. 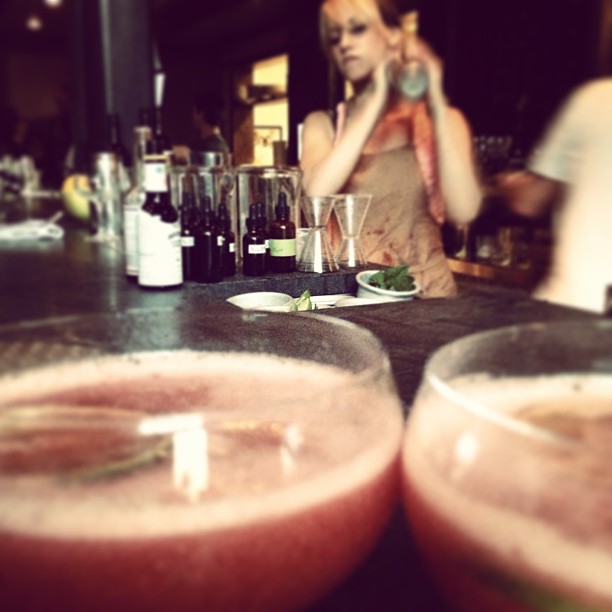 Delicate mixtures of flavor and aroma, with a touch of liquor and spiciness, is ultimately what I like to be drunk with. Like a crush, I think of cocktails as that special moment (or person)—a “punctum”—in my day. It’s also the punctum in my salon dinners, in Barthes’ Camera Lucida sense (that personally touching detail that establishes the relationship between viewer/viewed or subject/object).

Although I’ve gotten the salon dinners down to a science as I’ve had 61 dinners in the past 3 years, the ones with cocktails stand out as luxurious and decadent in the best possible way, and they’re altogether another type of experience for me. Experientially it’s my “waku doki”—that feeling of anticipation, thrill and excitement—the light at the end of a tunnel of a day’s work of work and parenting … There are four salon dinners in particular that hold that place of beauty (and taste) in my memory—the last one, #58, was for a feature in the San Francisco Chronicle last week. Greg Lindgren, co-owner of 15 Romolo and Rye, created a gorgeous concoction of tequila, mezcal, lime, blood orange, ginger and a dash of angostura.

Greg and his cocktail, in context—my 4th Street studio, Berkeley.

Why that specific drink, I ask? He answers, “The inspiration was driven by request, which we always love. Shelley let me know to work with blood orange and ginger. We always have ginger as a staple in our arsenal, and we like it to be extra hot so it has a kick. Bi-Rite had just donated too many cases of blood orange to be used for the Good Food Awards that week, so some of those made it into the mix. I hate to waste any citrus. My dad had an orange grove in SoCal up until a few years ago. I kind of revere the part of the California citrus industry that is a bunch of small farmers banded together with a world-class reputation. Tony [Bravo] wrote about spraying Mandy Aftel’s chef essence over his drink. That was something I grabbed knowing we were going to be in your studio, and heard Daniel P. would be there. I absolutely latched onto his and Mandy’s work on aroma for cocktails, and applaud Mandy for creating such a useful product.”

A couple months ago Timothy Felkner made Hot Lips and M.O.F. When asked about the inspiration for his cocktails at salon dinner #50 (September 26th, 2013), he said, “I was at the farmers market and picked up a ton of ripe peaches. When you asked me to make a cocktail I thought, ‘Peaches like tequila, tequila likes lime, and lime likes spice,’ and my cocktail was born.” 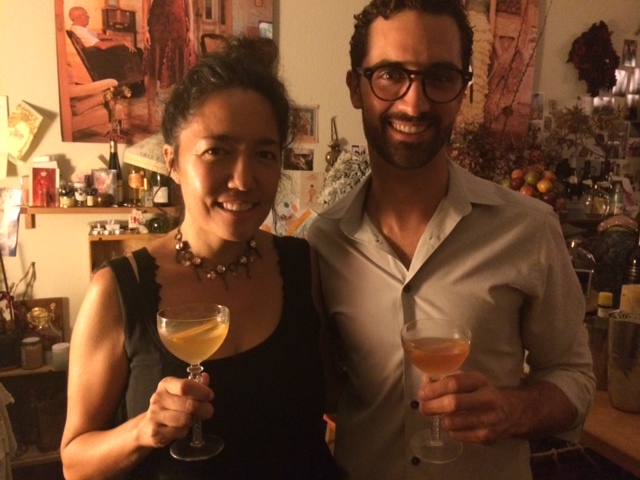 Timothy and me with his M.O.F. in one of my vintage glasses.

Before that, Thad Vogler from Bar Agricole and Trou Normand made his signature Algonquin and Hawaiian cocktails for salon dinner #47, July 19th 2013.

Thad’s ingredients for the evening’s drinks.

Thad and me. Very excited to have him in my studio….

But my very first dinner where a cocktail was served was #26 on June 9th, 2013 (co-hosted with Charlotte Eyerman), and it was a barrel-aged Negroni that Kelly Puleio and Artful Gentleman’s Jake Wall had brought. It was also the same day that our collaborative wedding collection (shot by Kelly) was featured in the San Francisco Chronicle. The timing (and anticipation) of the article and the Negroni together was perfection. The photograph encapsulated for me Twyla Tharp’s “collaborative habit,” and the Negroni was Turino, in a glass. 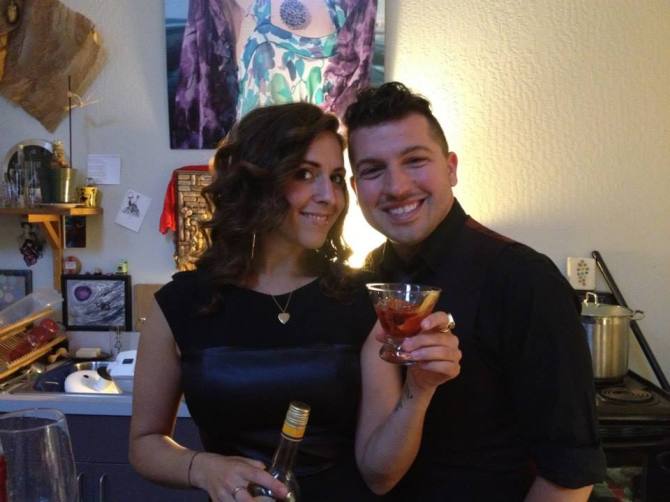 Shot on location at Legion of Honor, SF. (Photo by Kelly Puleio)

Kelly and I also worked on another project together that combined cocktails and clothes—for Kiki Braverman’s pür spirits cocktail book. With cocktails created by mixologist Summer-Jane Bell and creative force Tamara Costa juxtaposed with the texture and ruffled folds of my gowns inspired by 1930s Art Deco Berlin artist Tamara DeLempicka, Kelly’s photographs convey both the sexiness and mystery of what lies beneath a gesture, flirtation, and smell, and the allure of a mixture of intoxicating ingredients. To me, what Kelly does with my gowns on bodies, is what she does with was a cocktail in a glass—a mixture of lighting and form, encapsulated in the provocation of nakedness in clothed silhouette. 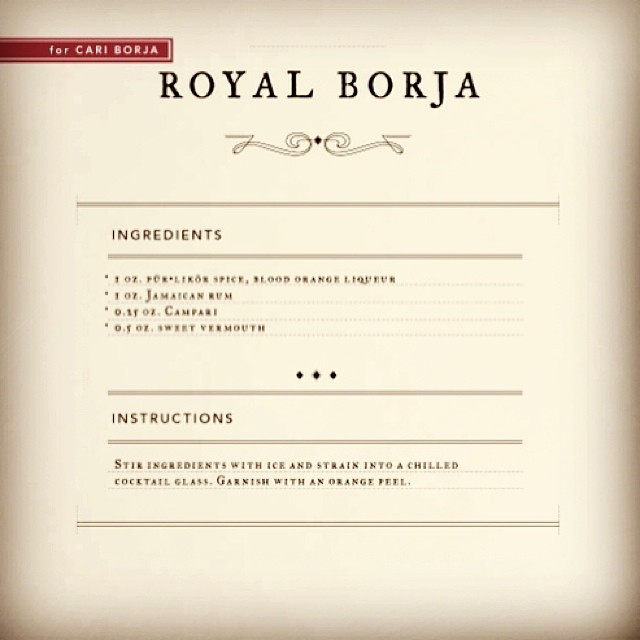 “Fashion and cocktails—both are conceptually creative and not static … Cocktails and sexy ladies, Cari, that’s what it’s all about.”

pür spirits, my perspective of model Marguerite Regan, in my Chez Panisse-inspired gown, with photographer Kelly Puleio in the foreground.

So why cocktail and not wine for me? I have wine around me all the time. My husband collects it, there are many bottles around me at home, in my studio—but not so of the perfect cocktail. For Greg, he says “when it comes time to have a glass, I’d be likely to sip Raj’s [Sandhi or Domaine de la Cote] wine because I know I can make almost any cocktail while I can’t always have access to great Burgundy. For Italian wines, Shelley has me covered. If I drink spirits, it is usually something straight or with a little ice. So I think people who like to eat and drink and try things in variety, gravitate to the thing they don’t have around them all the time.”

“Haberdasher” by Josh Harris & Scott Baird (The Bon Vivants, SF). Shot at the Comstock Saloon, SF for The Art of the Shim. (Photo by Kelly Puleio)

And maybe it also has a little to do with striking a balance between the perfect cocktail that might invoke a moment in the past brought into the present through the basic cotton candy color of the cosmopolitan in Sex and the City—which I would watch nonstop night after night in our Oakland home after having my daughter Royal, losing myself in the idea of a New York City nightlife and chasing the dragon of that first moment when a sip of alcohol enters the bloodstream and everything will be OK. But again, its atmosphere and context, it’s timing. And it’s all in the how do YOU like it and WHY do you like it like so? 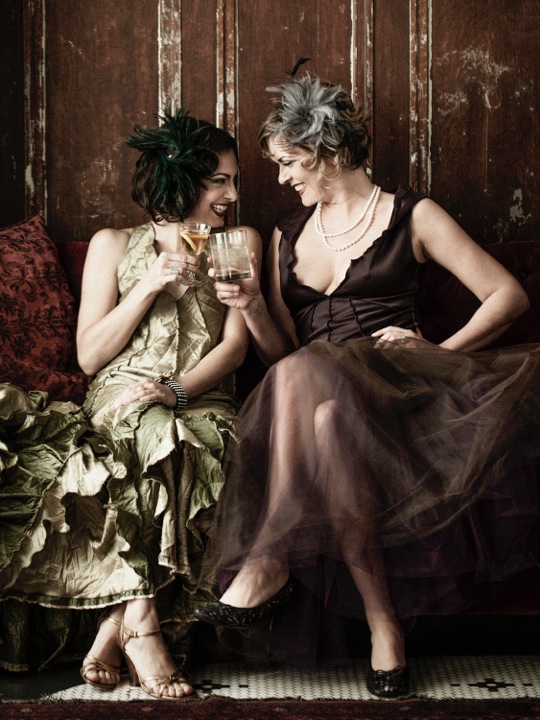 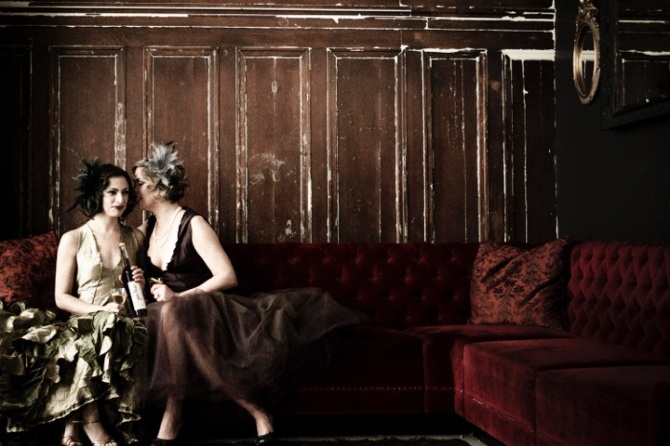 One of the most striking scenes and monologues in my memory that conjures a meaningful place—Jamaica—and a meaningful moment is Tom Cruise reciting the last barman poet. It was this specific scene, when I was in high school, that I wanted to be in some day, or at least to be part of the awe of the act of mixing rawness into something transcendent, ethereal, seductive: the perfect concoction, that indeed can make one purr approval, as Tony Bravo wrote last weekend. I think it all stemmed from there.

You want poets?
You want poets?
I am the world’s last barman poet.
I see America drinking the fabulous cocktails I make,
America’s getting stinking on something I stir or shake.
The Sex on the Beach,
The schnapps made from peach,
The Velvet Hammer,
The Alabama Slammer.
I make things with juice and froth:
The Pink Squirrel, the Three-Toed Sloth.
I make drinks so sweet and snazzy:
The iced tea, the Kamikaze.
The Orgasm, the Death Spasm.
The Singapore Sling, the Dingaling.
America you’re just devoted to every flavor I got,
But if you want to get loaded…
Why don’t you just order a shot?
The bar is open.

“Odors have a power of persuasion stronger than that of words, appearances, emotions, or will. The persuasive power of an odor cannot be fended off, it enters into us like breath into our lungs, it fills us up, imbues us totally. There is no remedy for it.”

Just like your lover or libation, your crush, your cocktail, your drug—there is a sweet and powerful memory scent that instantaneously brings you back to a moment in life; oftentimes, we desire to be taken back. Sometimes it’s NYC, sometimes Venice, London, Jamaica—but I can get a hint of it in Oakland, or even in my Berkeley studio, when someone serves the perfect melding of ingredients, and tops it with a hint of a blood orange or ginger spray. We move forward by invoking the past in the daily ritual of a twilight clink of glass, a sound that commences the night ahead and all its possibility. 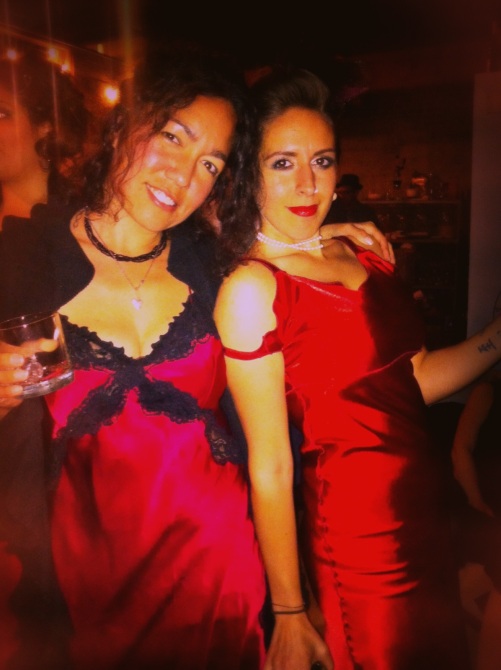 Kelly Puleio and me, at the reception for spirits’ Cocktail Cult: Free-Spirited Cocktails & Pure-Spirited Women. I’m wearing Mary Green lingerie, and Kelly is wearing one of my satin “Wings of the Dove” gowns.

“In the end all collaborations are a love story.”

Kelly Puleio’s work is featured in pür spirits’ Cocktail Cult: Free-Spirited Cocktails & Pure-Spirited Women, Dinah Sanders’ The Art of the Shim, and in the upcoming book The Negroni, out in May, published by Ten Speed Press, with Gaz (Gary) Regan. More photography can be found at www.kellypuleio.com.

Greg Lindgren is co-owner of 15 Romolo and Rye in San Francisco.

Timothy Felkner of Vigilante Hospitality is working on a new restaurant with chef and partner Jason Fox from Commonwealth. The restaurant, at 8 Mint Plaza in San Francisco, is due to open this summer.