One autumn evening in 1980, massive video screens greeted the people of New York and Los Angeles as they strolled through public spaces. Connected by a satellite feed, the two screens each displayed live action on the opposite coast. The startled audience—who doubled as unwitting performers—could observe the minutia of daily life a few thousand miles away. Some viewers ran home to call their cross-country relatives and make a plan to “meet” by the screens. By the third day, the crowds were getting so massive that the artists who’d set up the feeds, Kit Galloway and Sherrie Rabinowitz, had to dismantle them.

The installation Hole in Space pushed the barriers that video chat technology would eventually shatter. But what kinds of divisions exist even when distance doesn’t? In a modern-day reproduction of the project, two artists are exploring the contemporary obstacles to communication.

Originally, Ellen Sebastian Chang and Maya Gurantz—based respectively in Oakland and Los Angeles—planned to launch A Hole in Space (Oakland Redux) on Martin Luther King, Jr. Day. After technical issues forced them to postpone a day, the artists installed live video and audio feeds not on opposite coasts, but in two wildly different neighborhoods in the same city. The cameras were trained on residents in upscale, mostly white Rockridge and on residents in low-income, black and Latino East Oakland. Every night for a week, as soon as it was dark enough to make out the images, the screens would go live.

The intention was simple: to have neighbors engage with each other, even if just for a fleeting moment.

Before the installation, the artists talked cautiously about their hopes and goals—and concerns.

“My greatest fantasy of this piece is that two people that normally wouldn’t talk to each other would enjoy the interaction so much that they’d say, ‘Are you walking by here tomorrow night? ‘Cause I am, and I’ll wait for you. Let’s talk,’” said Sebastian Chang, a theater director, artist, and teacher.

In the two locations, daily life and landscape are drastically different—and so are the implications of installing a camera in a public space, the artists quickly found out. A few days into the project, Sebastian Chang visited the site of the East Oakland installation, a youth job training nonprofit called Youth Employment Partnership (YEP). 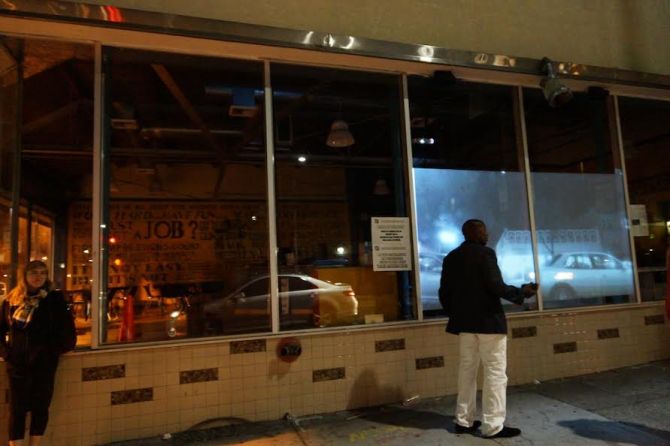 “What do you think of when you see video cameras?” she asked teenagers in the program.

Fifteen-year-old Frank Johnson II had a similar reaction when he first heard the basic premise of the project. “So you’re spying,” he said. “If you’re watching someone, you categorize them. It’s stereotyping.”

The artists were not naïve to these potential readings of their work when they chose the locations. Sebastian Chang said that, as a black woman, she understands the feeling of being constantly surveilled. But neither she nor Gurantz quite realized the extent of the potential consequences of filming—and recording—on East Oakland’s International Boulevard. As they were setting up the feeds, a counselor at YEP asked them if they had a good lawyer. “If the Oakland police know what you’re doing out here, they’re going to subpoena you. They’re going to try to see what’s going on,” he told them.

Of course, what makes the artists’ work different than yet another liquor store security camera is the dual nature of the feeds. The people walking by YEP aren’t only being watched; they too can be voyeurs, spies. And in the more intimate environment of the installation, they can, at least theoretically, be heard and seen as individuals.

Sebastian Chang asked the YEP youth whether they felt they had any power in this situation, and whether the screen could serve as a safety barrier that allowed them to express themselves.

“If you’re having a conversation with someone in Rockridge who normally might hold their purse tighter and cross the street when they see you, what would you say to them?” she asked.

“Why are you scared?” one of the students answered.

Despite their skepticism about the project, the young people filed out of their classes at the end of the evening and headed to the video screen to try and catch the eyes and ears of the Rockridge residents. Occasionally, people on either side would delight in waving to each other across town, asking each other how the evening was going. For the most part, though, passersby simply carried on with their business or glanced blankly at the projections. 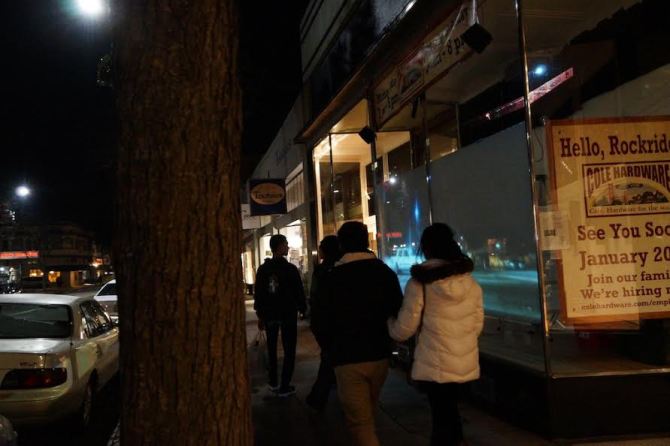 It’s hard to know what was responsible for the overwhelming disinterest throughout the week the installation was up. Politics? A lack of curiosity? Imperfect technical quality? Distraction? Sebastian Chang thinks it’s a sign of the times. Whereas the video technology in the original Hole In Space was itself the novelty, the saturation of that kind of technology could be the very culprit of this version’s lesser success.

“Everyone walking by was on their cell phones,” Sebastian Chang said. “When you’re so curated towards one direction …i t gets hard to just walk up to someone and say, ‘What’s this about?’ I think now more than ever, people are so afraid to be rejected. They don’t want to bother you because, in fact, they don’t want to be bothered. I think there’s some people in [Rockridge] too who might not like the idea that they’re being filmed. The whole now thing is: I curate my own experience, I take my own selfie.”

One teenager at YEP surprised Sebastian Chang by agreeing.

“I feel like your intention is to connect people—but why do that virtually?” asked 17-year-old Maleah Ruffin. “Why not throw a safe block party?”

Maybe, though, people would have jumped at the chance to put their cell phones in their pockets and chat for a few minutes—had they only known that was an option. With minimal signage and no press ahead of the week-long run, few people heard about the installation.

But that wasn’t poor planning. In fact, it was all part of the experiment: to see whether people still had a natural inclination toward discovery, to see whether they’d stop and take the time to figure out why the window at Cole Hardware in Rockridge had been taken over by a video screen, and to tell their friends at dinner that they ought to stop by this unusual exhibit the following evening.

Given that they couldn’t hang around the sites every night, the artists themselves don’t quite know how it turned out. In the coming weeks they’ll watch and edit the recorded footage, and eventually present a video at a panel discussion hosted by the Great Wall of Oakland, the nonprofit sponsoring the project.

Once the feeds were working, the artists took a consciously hands-off approach.

“In some ways it’s like a play,” said Gurantz, a former theater director who now works in visual arts. “When all the work is up, you have to step away to see how the intervention adjusts the space or not. It’s a prompt: I’m going to put this here and see if you respond to it. The river is flowing and you put a rock in it.” 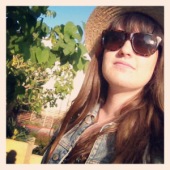 Natalie Orenstein is a reporter who has written for publications including the San Francisco Chronicle, Berkeleyside, and Eye Magazine. She is a Bay Area native and enthusiast.