Another year in the books, and plenty more beer in our bellies. We have had another wonderful year of beer adventures, starting in January with The Art of Beer event at McClellan, and continuing with San Francisco and Sacramento Beer Weeks, our trip to Portland, the Sierra Nevada Beer Camp, and our many day trips and weekend voyages to San Francisco, Oakland, Berkeley, Mill Valley, Albany, Walnut Creek, Chico, Rocklin, Folsom, Davis, and various other points across Northern California.

More great beer is being brewed, poured, and sold in our neck of the woods than ever before, so we have had the opportunity to try a lot of amazing brews in 2014. The following is a list of the 10 best beers that we tried for the first time in 2014, with an addendum list of 10 more sublime first-timers. To be fair, we have omitted some “world famous” heavy hitters, such as Marshall Zukov’s Imperial Stout from Cigar City, Hill Farmstead’s Arthur, Cherry Adam From the Wood by Hair of the Dog, and Dogfish Head’s 18% ABV Worldwide Stout. We also excluded any excellent beers that only one of us tried (e.g., Triple Voodoo King Leopold w/ coffee, and Drake’s Jolly Rodger 2014), since we are trying to build a His & Hers consensus list. 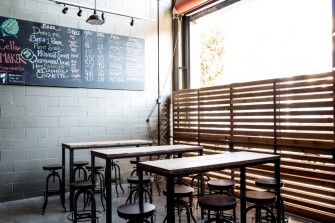 Finally, in order to spread the love around a little, we elected to only allow one beer per brewery.  That posed an immense problem with San Francisco-based Cellarmaker Brewing, since they have quickly become our favorite NorCal brewery, and we have collectively sampled and loved over two dozen of their beers this year (only the coconut-heavy ABV monster Blammo! was divisive—she adored it; he found it sickly-sweet). If we are being 100% honest, we would have no issue filling this top 10-plus-10 with 20 off-the-charts brilliant Cellarmaker beers. We could have gone with the smoked coffee porter Imperial Coffee and Cigarettes, the chewy oatmeal stout Walker, SoMa Ranger, the tart saison Beertender’s Breakfast, and then fill most of the rest of the list with their amazing hop experiments, such as Mo’ Nelson, No Nelson Left Behind, Highway to the Danker Zone, Dank Williams, Tiny Dankster, Spear or Culture, and Christopher Riwakan. Therefore, we have decided to name Cellarmaker our MVP Brewery of the Year—just go to Cellarmaker, find a seat, sample every beer on tap, and enjoy your new life.

MVP Brewery of the Year

&NBSP;
Daniel Barnes and Darcey Self-Barnes have been blogging about craft beer at His & Hers Beer Notes since January 2012. Darcey is a freelance designer and illustrator, and Daniel is a film critic for the Sacramento News and Review and a member of the San Francisco Film Critics Circle.