Can you buy haggis where you live? Burns Night is on the 25th January and of course, haggis would be the traditional foodstuff to celebrate the great Scottish poet at a Burns supper. But if you can’t get your hands on a wee beastie, there are lots of other delicious Scottish delicacies you could sample. Bagpipe music would set the scene if you are having friends to dinner, and traditional nips of Scotch whisky will get everyone in the mood for reciting Burns’ poems, saluting the haggis and giving toasts to the Lassies and Laddies. Robbie Burns Day falls on a Sunday this year, so it’s a good excuse for a get-together with a Scottish theme—and a couple of Hollywood stars have recipes for you!

Stuart Erwin in the kitchen with wife June Collyer.

Burns suppers traditionally begin with Scotch Broth. Here’s a recipe from Stuart Erwin, a much-loved comedy actor with film and television credits dating from the late 1920s to the late 1960s. He received an Academy Award nomination for his role as the brother of Judy Garland’s character in Pigskin Parade (1936), and starred in the long-running TV series The Stu Erwin Show with his real-life wife June Collyer. Stuart was born in Squaw Valley, California, so I don’t know if he had Scottish roots. But here’s his very own recipe for Scotch Soup:

To water add barley and salt. Cook very gently till soft. To tomatoes add remaining vegetables and sugar, and cook gently for 20 minutes. Push through course strainer: add to barley with tapioca, and cook very gently in double boiler until tapioca is clear. Remove from fire, stir in malt syrup and butter, and serve. 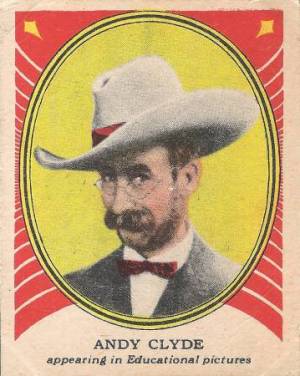 If you can’t procure a haggis as a main course for your Burns Night dinner, here’s a sweet potato-topped casserole that on paper sounds a bit odd, but in reality is absolutely delicious. This recipe was proposed by legendary actor Andy Clyde, one of the first Scots in Hollywood. He was a much-loved comedian with an extremely long career. Beginning with extra work in silent Mack Sennett comedies, Clyde became a beloved comedy cowboy sidekick in the 1940s and 1950s with his last role being the Cully Wilson character in the 1960s television version of Lassie .

Fellow actors Kenneth Harlan and Rex Lease put together a cookbook in 1939, asking their friends in the business to supply their favorite recipes. The book has the brilliant title What Actors Eat—When They Eat . Were actors back then too busy to eat? Or just dieting?

Introducing his casserole recipe, Andy Clyde makes a joke at his own expense by saying: “This is not only a marvellous dish, but a whole dinner as well, and to a Scot this is most important because, for one thing, it saves fuel. Here it goes.”

Put the butter in a saucepan and brown the mushrooms. Remove the mushrooms and add flour to the butter; blend; then add two cups of stock. Let thicken, then add about three drops of Worcestershire sauce and stir.

Arrange in layers as follows: three cups of diced ham, the mushrooms and Brussels sprouts.

Cover with the sauce. Now top this with the mashed sweet potatoes.

Bake in a moderate oven [around 350 degrees F/180 degrees C] until the sweet potatoes have been browned on top.

I love the way he specifies the exact number of brussels sprouts to include. A dozen—no more, no less!

And for pudding? Well Tipsy Laird Trifle is a traditional dessert for this special night, and marvellous with it. If you pop over to the Silver Screen Suppers site, you’ll find Virginia Verrill’s recipe for a Tipsy Parson Pudding, which is more or less the same entity. Tipsy lairds, tipsy parsons, it’s going to be some Burns Night!

Jenny Hammerton is a film archivist with a nosey parker interest in what the stars of Hollywood Golden era liked to eat and drink. She’s been scribbling away about film star recipes for around eight years at Silver Screen Suppers and her bulging collection of film star favorites now numbers over 5500. When not cooking and writing, Jenny works with the British Movietone newsreel collection for the AP Archive in London, and DJs on a wind-up gramophone with The Shellac Sisters. You can read about and buy her new book Cooking with Joan Crawford here.