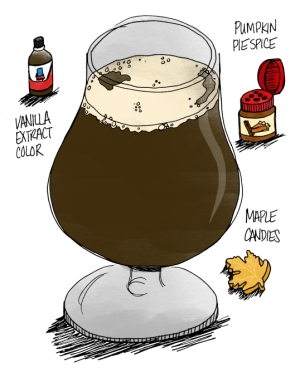 Pinchy Jeek is “brewed with pumpkin and spices and aged in Wild Turkey bourbon barrels” by Anderson Valley Brewing Company, and it pours a black-and-tan color with a mid-sized, beach sand hand. The nose is sweet, transfixing, mysterious, and autumnal, a candied and complex aroma that boasts pumpkin pie spice, toffee, vanilla, and a hint of whiskey barrel. Spices hit the palate first, a warming glow of nutmeg, cinnamon and pumpkin, with the Wild Turkey kick and Tootsie Roll sweetness riding in on the second wave of flavor.  It’s a fascinating and rewarding brew, maple sweets and savory spices in perfect harmony, and an essential beer for the fall.