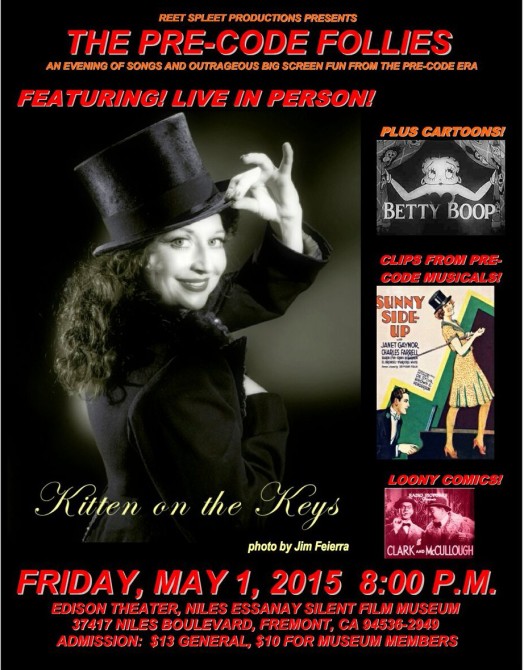 Kitten (aka Suzanne Ramsey), an expert on songs from the 1920s and 1930s and collector of vintage sheet music, will sing a selection of songs popularized by Betty Boop, the Boswell Sisters, Ruth Etting and more, while accompanying herself on the piano and the mighty uke. She refers to her comedy-music mix as a “racy ragtime romp—madcap gems from yesteryear with a naughty whimsical edge.” 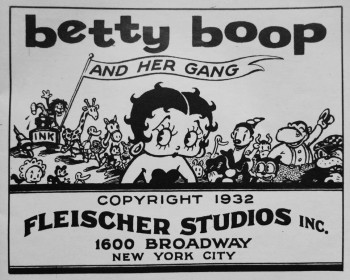 Naughty and whimsical are among the many terms that describe the very specific era in cinema to which this program pays homage, beginning in 1927-1928, when the “dawn of talkies” brought a certain wild imagination into the movies, and ending with strict enforcement of the Production Code in July, 1934. It was a wild time that ended in an instant, but it lives again through this retrospective. In “Pre-Code Follies,” Betty Boop rules, high-stepping showgirls “Turn On the Heat”, Wings star Charles “Buddy” Rogers delivers a “New Deal Rhythm” manifesto, and tap-dancing showgirls spell out NRA!

When the fun ended for much of America, it increased dramatically in the movies. The Jazz Age (aka Roaring Twenties) ended with a thud, or more accurately, a series of dull thuds, when Wall Street speculators and ordinary folks who lost everything began jumping out of tall buildings, giving new meaning to the phrase “pounding the pavement.” People from all walks of life had the blues. The balm in hard times? Well, besides the St. Louis blues there were movies. Lots of movies. 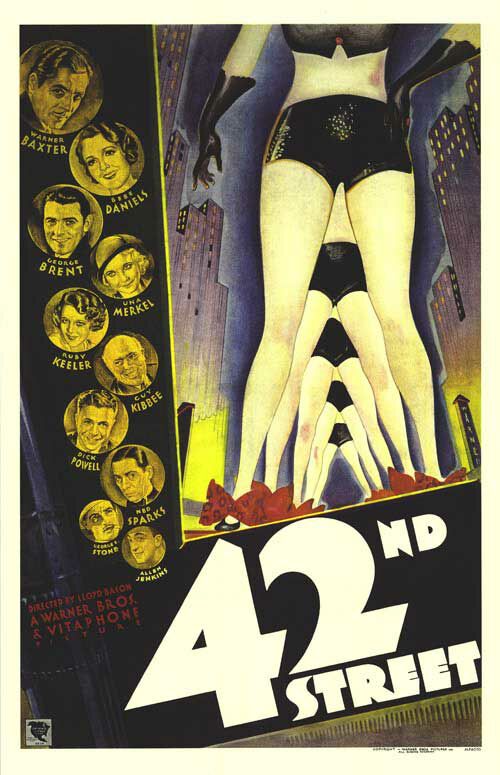 And the first generation of movie musicals hit theaters like a showgirl-filled tidal wave. The uncrowned queen of early talkies, Alice White, sang “Give It This, Give It That” and “Hang Onto a Rainbow” with so much gusto that she was nicknamed the Princess of Pep.

Features from mega-budget MGM and hard-boiled Warner Bros. slipped a few more shots of bathtub booze in the cocktail shaker and let ‘er rip; not only did adult themes find their way into the mix, but unfettered imagination reigned supreme. It was not Al Jolson in The Jazz Singer and The Singing Kid that threw down the gauntlet, but two groundbreakers: Rouben Mamoulian’s graceful and fluid camerawork in Applause , and the inspired collaboration between Walt Disney, Ub Iwerks and maestro Carl W. Stalling in The Skeleton Dance . Set designers as well as cartoon skeletons and ghosts were subsequently at full employment. 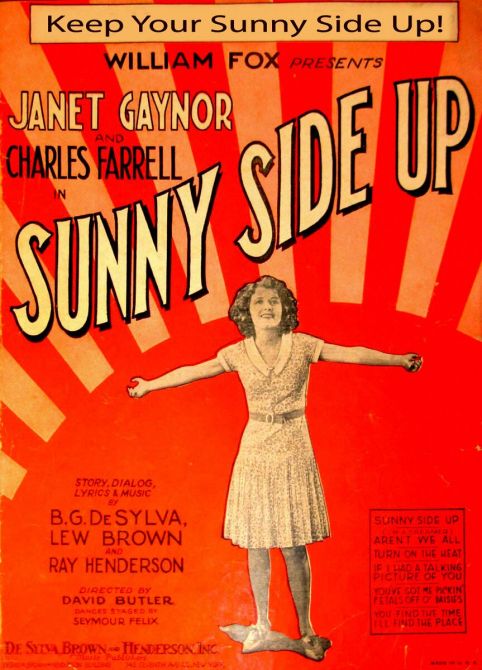 Cinematic technique meant the formerly stage-bound musical could now boast hallucinogenic production numbers choreographed by Busby Berkeley—and cartoons were made for anybody but kids. Productions such as Sunny Side Up (featuring “Turn on the Heat”) and Hips, Hips, Hooray! (featuring “Keep On Doing What You’re Doing”) were both naughty and whimsical.

Movie musicals, especially at MGM, attempted to outdo each other with outlandish sets and concepts (and the inevitable hordes of scantily-clad showgirls bearing plumage), while in animation, anything could happen anytime. Most notable for inventive and utterly bizarre cartoons: the New York studios Fleischer and Van Beuren. 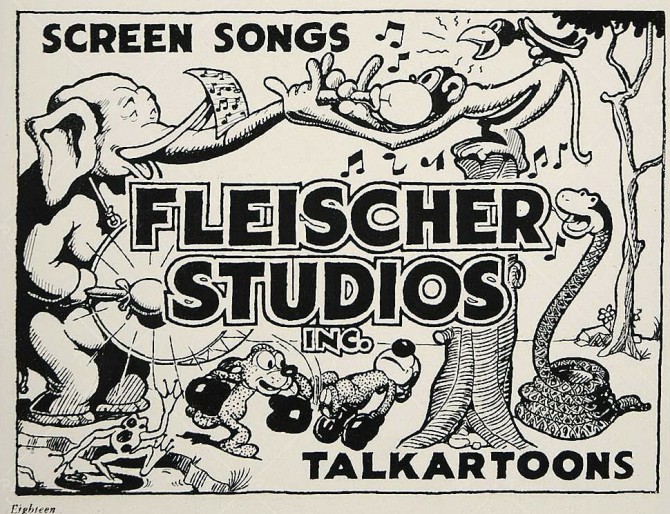 The Fleischer Studio mission before July 1934 was to incorporate as many risqué and wonderfully grotesque moments into the Betty Boop and Screen Songs cartoons as humanly possible, while Van Beuren (like, to a lesser degree, the Paul Terry studio) compensated for threadbare budgets and grueling production schedules with numerous outbursts of weird, wild imagery. Nobody would have scoffed more than the poorly-paid animators in these studios at the word “Surrealism,” but their way-out ideas added bent fantasy worlds to the early-1930s movie universe.

Then the bluenoses of the time, deeply offended by Mae West’s first two films (and their boffo box-office), flexed their political muscle and demanded that the Production Code not just be on the books but obeyed. The happy lechery of West, the Marx Brothers, Wheeler & Woolsey, and Clark and McCullough was toned down dramatically. Cartoons across the board moved from the “rubber hose” style of animation to a more realistic —less strange—approach. Musicals transitioned from bawdy to elegant. Pre-Code was no more. 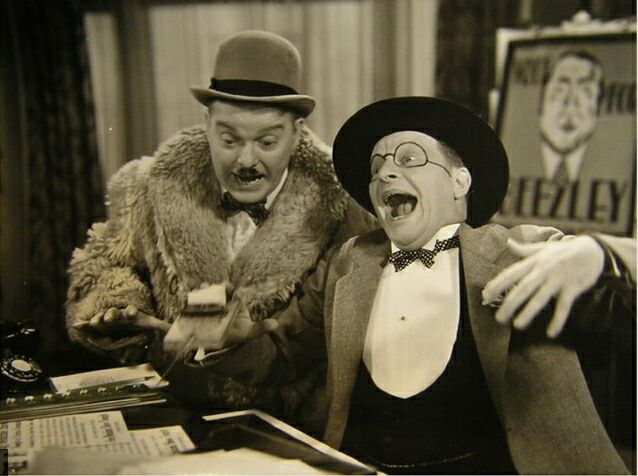 It would take another decade, the development of film noir, and a new generation of censorship-flaunting animators (Frank Tashlin, Bob Clampett) to gleefully circumvent or challenge the restrictions of the Code in the WW2 era—with directors such as Preston Sturges and Billy Wilder and intrepid Pre-Code stars like Barbara Stanwyck leading the charge.

Paul F. Etcheverry is a writer and film historian who has programmed classic film events in the San Francisco Bay Area for more than 30 years. These include the Pre-Code Follies at the Niles Essanay Silent Film Museum and the KFJC Psychotronix Film Festivals at Foothill College. You can read his musings on 20th century pop culture at psychotronicpaul.blogspot.com.