Past landmarks: The cover page of Phoebe Gloeckner’s The Diary of a Teenage Girl.

In 1976, the year in which Marielle Heller sets her portrait of the artist as a young girl — adapted from Phoebe Gloeckner’s semi-autobiographical 2002 graphic novel, The Diary of a Teenage Girl — the spirit of the bicentennial was surely alive somewhere in San Francisco. No one, though, seems to be celebrating in this particular version of the city, which has at its center other landmarks in a life.

It’s a version in which 15-year-old girls can wander in and out of Polk Street fern bars, practicing their “prostitute walk” and propositioning men, doing lines at parties with the adults tasked with their supervision, and the young girl and artist in question, Minnie Goetze (played with precise conviction and adorability by Bel Powley), can convert her sketchpad bedroom fantasies into real-life experience by hitting the bar on two-for-one Tuesday with her mother’s 35-year-old boyfriend, Monroe (Alexander Skarsgård). “Oh Monroe,” Minnie dreamily soliloquizes after getting absent-mindedly felt up by him on the couch late one night. “Pitter-pat. You touched my tit. How was that?” 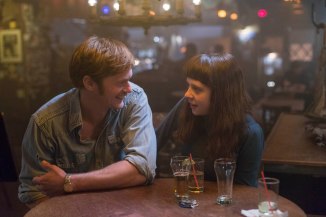 Two-for-one: Monroe (Alexander Skarsgård) and Minnie (Bel Powley) hit the bar in The Diary of a Teenage Girl.

And with that, for better and probably also for worse, something else gets converted: The skin-crawling sensation of watching a quasi-incestuous interlude lit by late-night television recedes somewhat, as Heller steadily diverts our attention to Minnie’s droll post-grope introspections and the thing that Heller is more interested in: a young girl’s rash, sometimes fumbling, occasionally repulsed explorations of her own sexuality, both its power over those around her and its more visceral dividends.

A post-virginity Minnie (Bel Powley) in The Diary of a Teenage Girl.

The film’s opening shot telegraphs this through line: trailing Minnie’s ass during an exuberant walk home through Golden Gate Park as she replays in wonderment the afternoon’s events, announcing to herself in voice-over, still astounded: “I had sex today. Ho-ly shit.” Watching Minnie eye a cluster of boys passing, a braless jogger, an amorous couple on a picnic blanket, we see the world as she does, hazy with pheromones and potential.

At that moment, anyway. Her take on the world is circumstantial, emotions flashing by in passage, like the images in one of the X-rated flipbooks she constructs. Later she’s raging in the bathtub against Monroe’s inconstancy; sharing heartfelt imaginary confidences with Twisted Sisters comic artist Aline Kominsky (R. Crumb unapologetically sidelined here); silently digesting bad advice doled out by her party-girl mother, Charlotte (Kristen Wiig); or wistfully remarking, “I wish I knew someone who’s happy…” Later still, Heller captures the exact moment an infatuation dies, draining away out of Minnie’s incredibly expressive eyes. 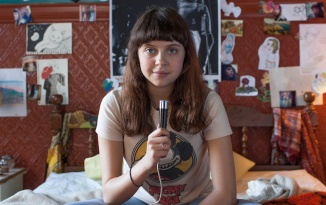 An archive lives: Bel Powley as Minnie in the film version The Diary of a Teenage Girl, and panels from Phoebe Gloeckner’s book.

Lucky for us that she records her impressions first on a series of tape cassettes, her narration to some barely outlined future self and a big-boned cat on the bed standing in for the three-ring binder of Gloeckner’s novel, stuffed with loose-leaf, crawling with proto-comic sketches that in the film creep, animated, into the frame during daydreams and acid trips. In its immediacy, the film fends off any sense of the nostalgia, regret, or decades-old embarrassment that such an archive might churn up someday. Instead, from a remove, watching an artful retelling, we can see that Minnie is right, in her adolescent certainty, that—acute dangers of discovery notwithstanding—all this will still matter when it surfaces in a box under a bed in some future, grown-up version of the city in which she has adventured. 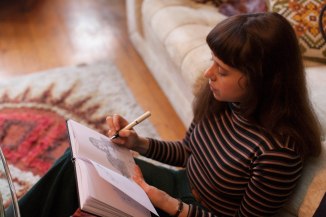 Minnie (Bel Powley) puts pen to paper in The Diary of a Teenage Girl.

Getting better: Minnie (Bel Powley) at the beach in The Diary of a Teenage Girl.

Fittingly, Heller’s film is tidier than Gloeckner’s chaotic, worrying, ambiguous recounting—indicative, maybe, of the narrative challenges of such a sprawling, inconsistent text as a diary, or of market forces, but also, maybe, a reflection of Heller’s own solicitous wishes for Minnie. If you fell for her on the pages that her grown, incarnate counterpart inked and wrote, having somehow made it to adulthood, you might want to give her a story that offered answers to at least a few of her poignant, hilarious, stream-of-consciousness queries about life, love, sex, and Aline Kominsky.

No doubt Minnie’s version of the city still sometimes manifests today, though the fern bars are ironic, the bouncers warier, the rehabbed Victorians full of helicopter parents reading magazine articles about their freaked-out, nature-deprived, micromanaged children. It’s hard to imagine a Minnie set loose upon the city long enough to gather material for a one-sheet comic, let alone a full-length Diary, but the closing words of Heller’s film—“This is for all the girls when they have grown”—imply she’s certain they’re out there still. 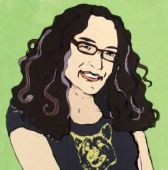 Lynn Rapoport has written about film for the San Francisco Bay Guardian, Fandor, SF360, and io9.

Also in this issue, read other reviews about  The Diary of a Teenage Girl by Dodie Bellamy, Janelle Hessig, Kevin Killian, and Trina Robbins.

To learn more about The Diary of a Teenage Girl and its author Phoebe Gloeckner: