The Internet can be a dangerous place to find the good, the bad and the ugly. Thanksgiving as a search subject is especially rewarding.  We present a sampling, mostly from the past. We found vintage greeting cards, Hollywood stars, ads for disgusting sounding foods, awkward family photos and all around nostalgia. You won’t believe what turkeys have been put through but we hope you will laugh and be astonished.

Before we go back too far in time we should note that a more recent tradition carries on where a President pardons a turkey.

I don’t get it. Why are they pardoned. The National Turkey Federation reported,” In 2020 the poultry duo Corn and Cob rolled up in a chauffeured car and walked a red carpet to the entrance of the Willard Hotel. They were escorted into their suite where, they jumped on the bed.”

In this year’s case the Chief Turkey pardoned Corn. What happens to poor Cobb? Both seem equally qualified to me.

According to the Washington Post, Horace Vose, a Rhode Island poultry farmer, began the tradition of gifting Thanksgiving turkeys to U.S. presidents in 1873 when he sent a 38-pound bird to President Ulysses S. Grant. But sparing turkeys dates back to Abraham Lincoln, whose son grew attached to a Christmas turkey and begged his father for its life. The tradition of sparing Thanksgiving turkeys continued on and off, and was practiced by President John F. Kennedy, Richard Nixon and Ronald Regan, but the tradition wasn’t considered an official pardoning until George H.W. Bush declared so for his turkey in 1989.

While the President of the United States traditionally pardons a turkey, in 2014 the Mayor of Seattle took a more comical approach and pardoned a Tofurkey- a tofu-based vegetarian turkey substitute. He also started a food drive!

A series of photos of Presidential turkey pardons through the years though I am not sure thes turkey believes it. 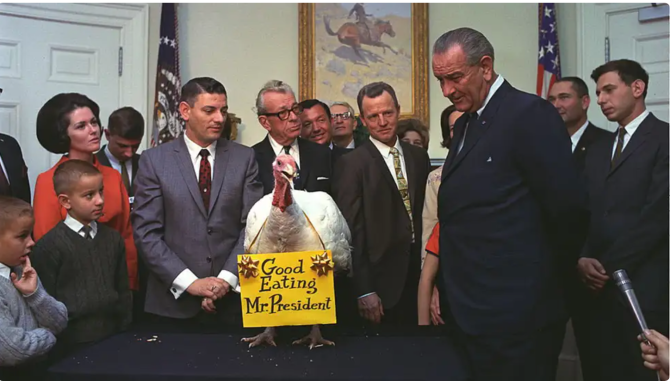 Is this New Yorker cover predicting 2020?

In the Golden Age of Hollywood upcoming movie stars at the studios found in their contracts that they must pose for publicity photos, often with holiday props, to help their careers. 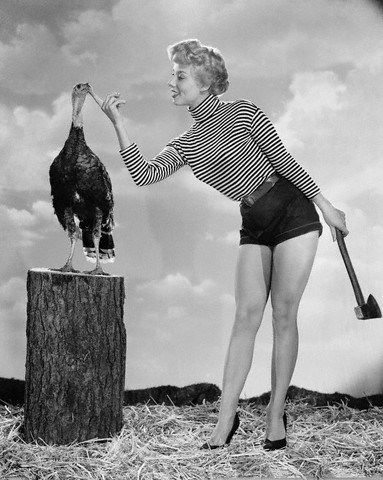 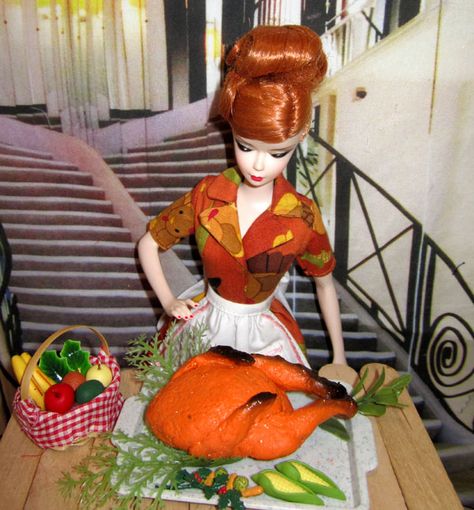 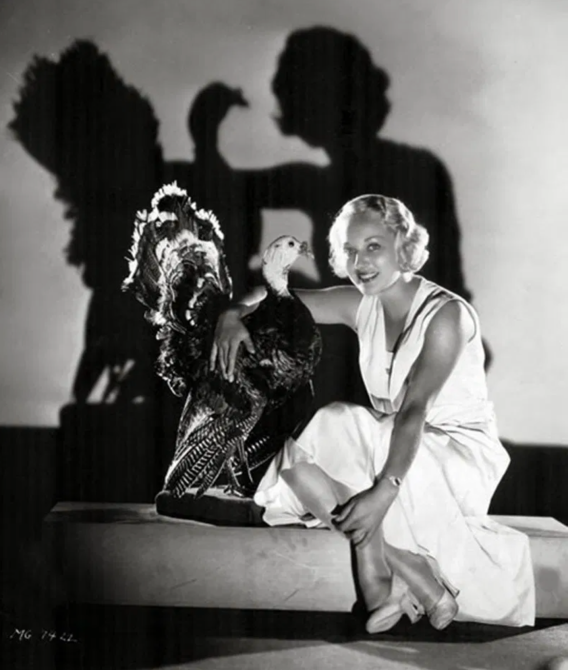 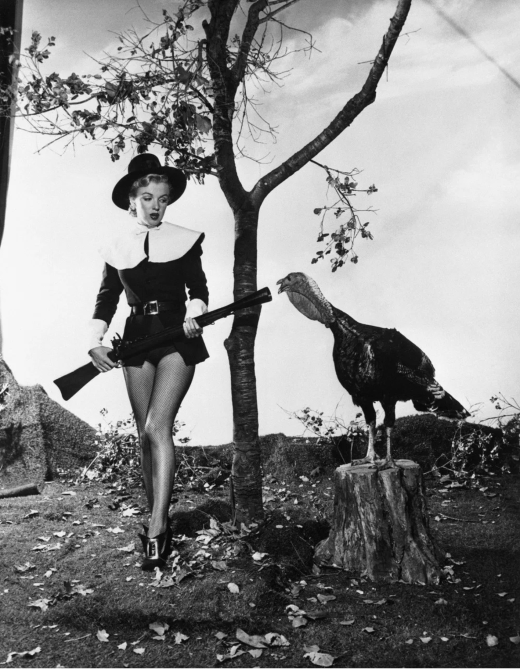 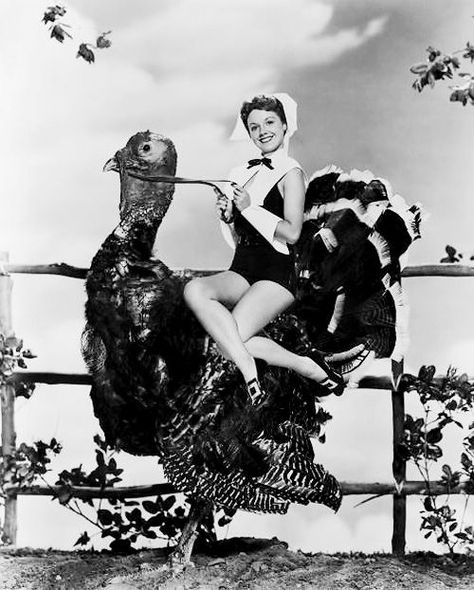 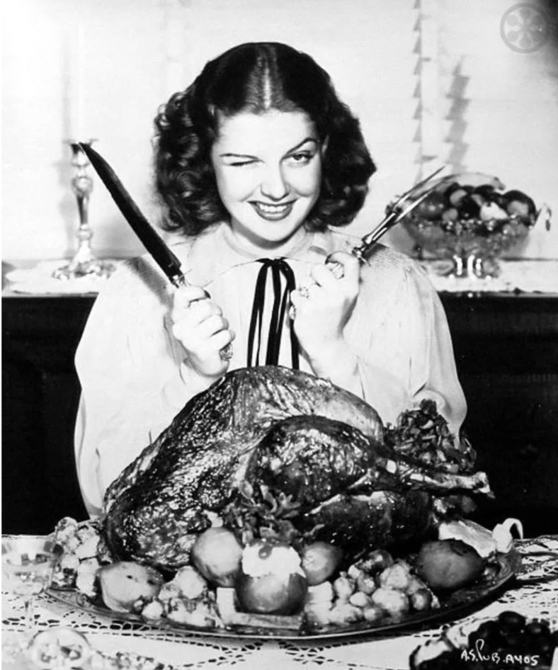 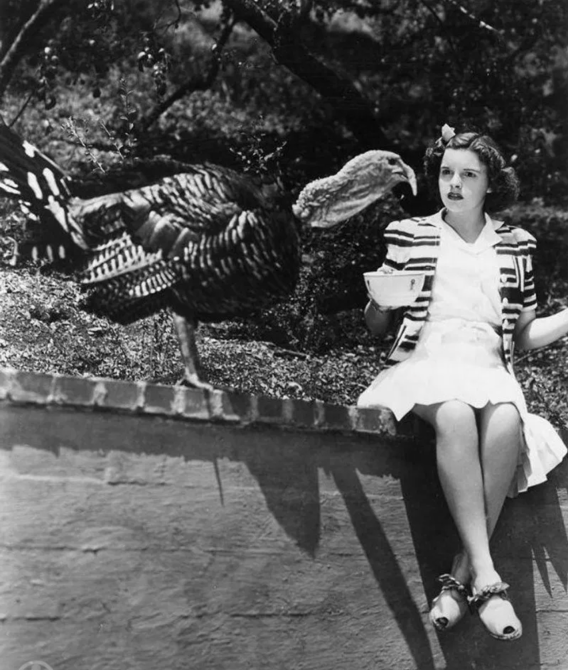 Mr. Bean’s hilarious turkey encounter is at Christmas but we couldn’t resist adding it.

Most years large family gatherings are popular. Some are happier than others. 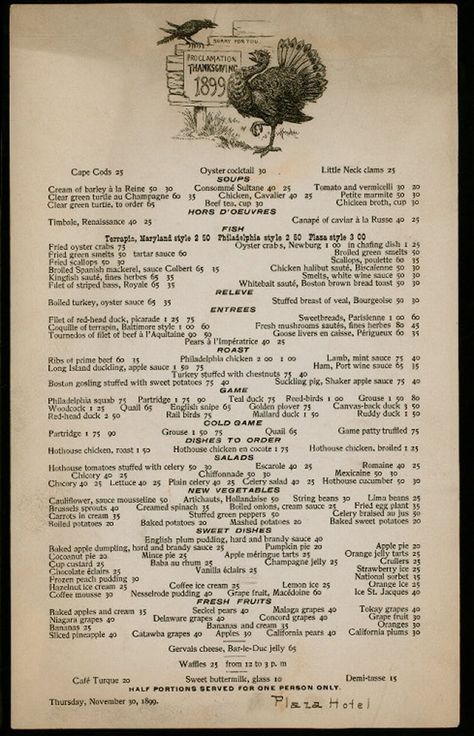 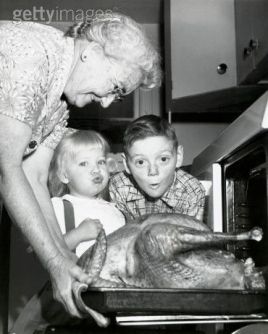 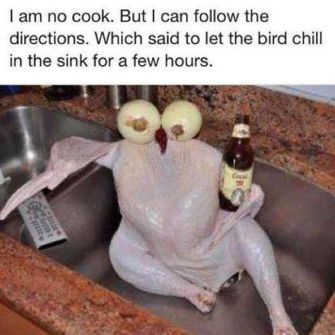 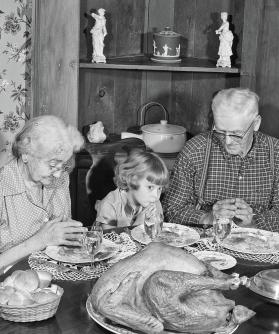 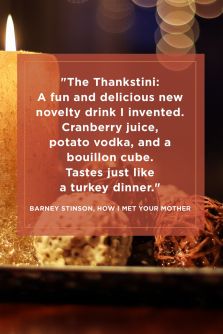 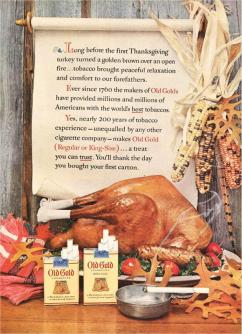 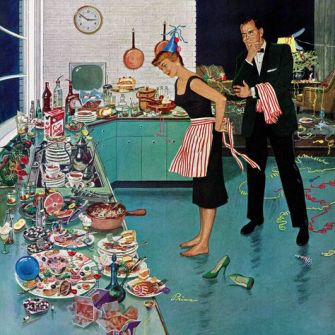 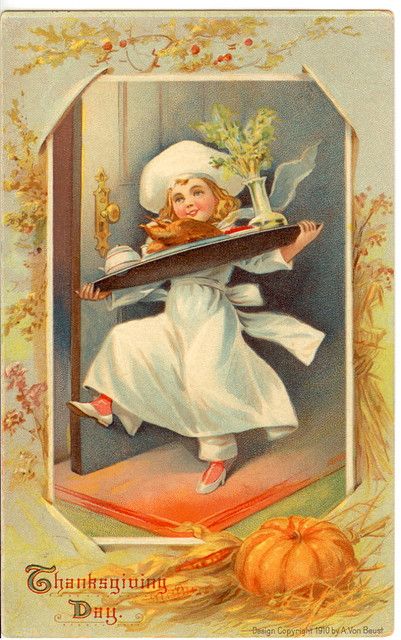 And then there are those awkward moments. Here are a few of our favorites but there are a lot more at Awkward Family Photos. 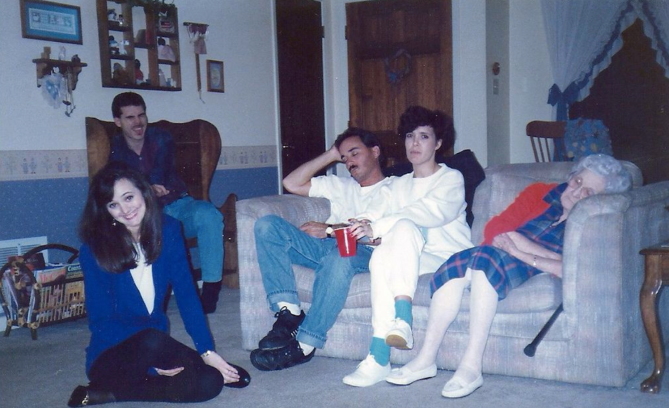 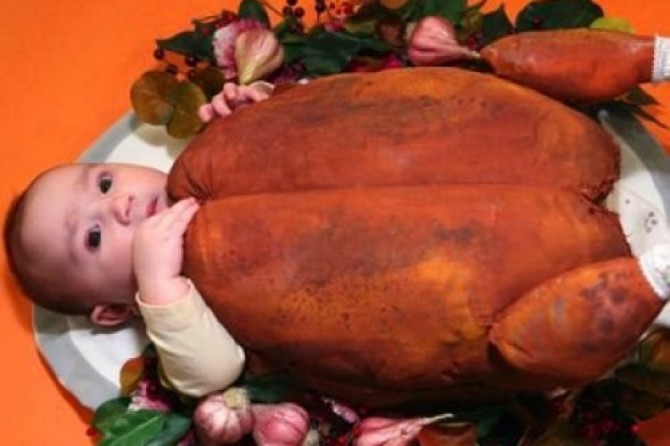 Images are mostly of white families and idealized imagery of the First Nation peoples and the Pilgrims. Native American writer Joanne Barker wrote in excellent article,

“No Thanks: How Thanksgiving Narratives Erase the Genocide of Native Peoples.” She starts with the quote, “It was not all Thanksgiving dinners in those early days.”
– Vine Deloria Jr. (Lakota)

It’s up to us to make sure our children know the real history that’s not taught in schools. Olivia B. Waxman writes in Time Magazine, ” ‘I Was Teaching a Lot of Misconceptions.’ The Way American Kids Are Learning About the ‘First Thanksgiving’ Is Changing.” I urge everyone to read it. 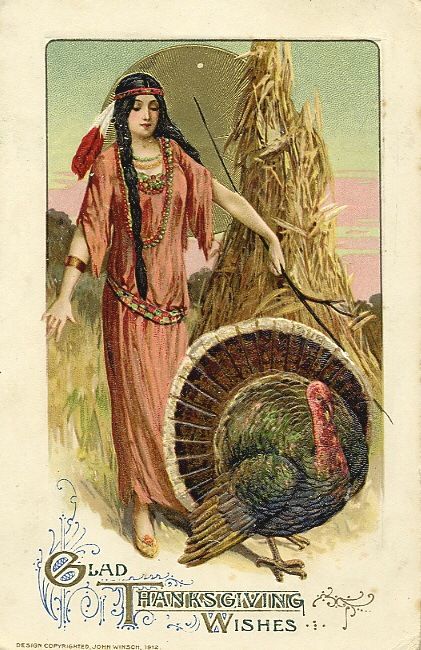 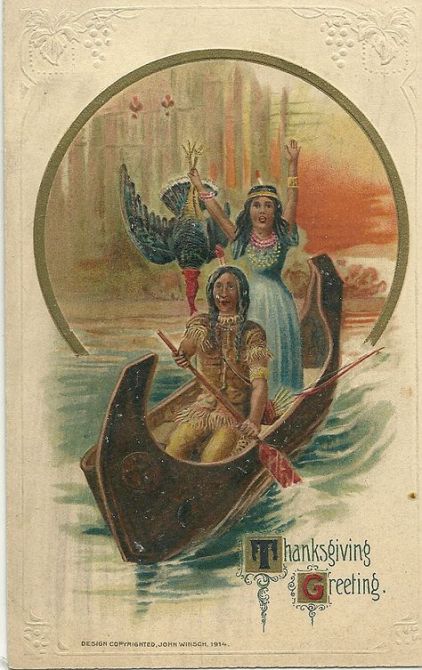 Mildred Europa Taylor’s “Why African-Americans are still holding onto Thanksgiving”  offers a valuable perspective. In searching for images there are many nostalgic images of Black families in stereotypical surroundings depicting poverty. A few I found show chefs and more recently contemporary families. 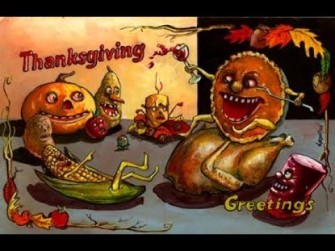 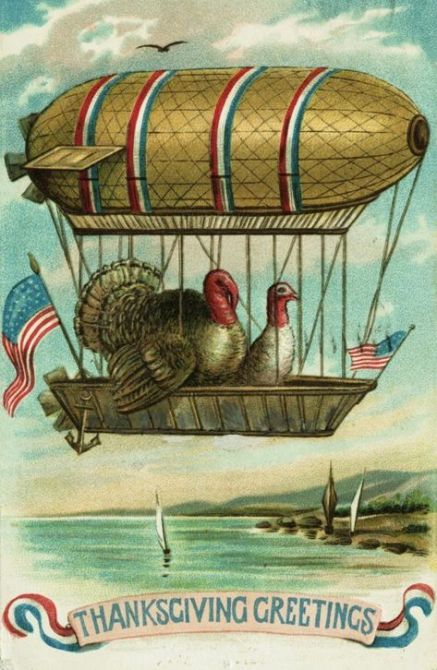 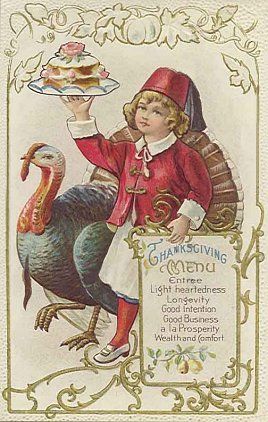 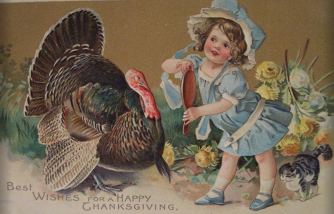 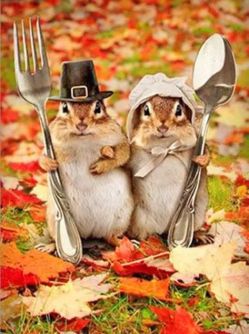