Brach’s comes to the rescue with Turkey Dinner Candy Corn.

“We’re always innovating with trends and fun flavors, and we know this year is different than anything we’ve ever seen—much like our new Brach’s Turkey Dinner candy corn, which includes a full-course meal of traditional Thanksgiving favorites,” Mariah Havens, Senior Brand Manager, Seasonal Marketing for Ferrara, said at the time. “From roasted turkey, green beans and stuffing to ginger-glazed carrots, cranberry sauce and sweet potato pie, our new Turkey Dinner offering is the perfect mix to welcome fall and celebrate the season with family and friends.”

There are many video reviews. 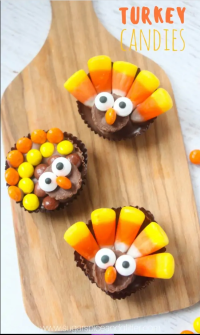 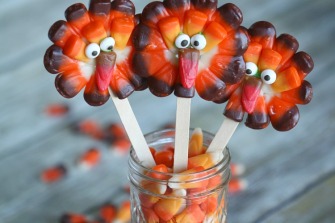 The creativity of people in the food industry is endless. And they even have an after-dinner game.

They are not the first to offer unlikely holiday tastes in snack forms.

In 2017 Pringles offered a pilot line of TV dinner-style Thanksgiving dinners. They had limited availability as a test. “Pringles are known for bold flavors and endless flavor stacking possibilities, so this holiday season we wanted to introduce snack-lovers to a new way to enjoy Thanksgiving favorites,” Kurt Simon, then senior director of marketing for Pringles, said at the time in a press release. “The Pringles Thanksgiving Dinner flavors, are not only new but cover every course of the real meal — from the main event, to sides and even dessert.” Packaged in a cute little TV dinner tray, the chips came in a whopping eight flavors: Turkey, Mashed Potatoes, Stuffing, Cranberry Sauce, Creamed Corn, Green Bean Casserole, Mac & Cheese, and Pumpkin Pie.

They didn’t sell them but sent them out to selected people they hoped would review them on social media and they got a lot of Instagram and Twitter activity and online reviews. The Swamp Family review is one of my favorites.

For more tests check out Natasha Blakely of the Battle Creek Enquirer (appropriate as Pringles is a Kellogg’s product and we all know they are based in that Michigan city; Mike Fahey’s Snacktaku is sure to put a smile on your face.

Clearly there was a sense of humor at work in creating this concept as Pringles also provided suggestions for combining the mouth-watering crisps. The “Leftover Sandwich” groups the Turkey, Stuffing and Mashed Potato flavored chips. The “Holiday Sweater” stacks Cranberry Sauce, Pumpkin Pie and Mashed Potato into a tasty treat. Lastly, Pringles recommends merging Green Bean Casserole, Mac & Cheese and Creamed Corn to create the “Touchdown.” 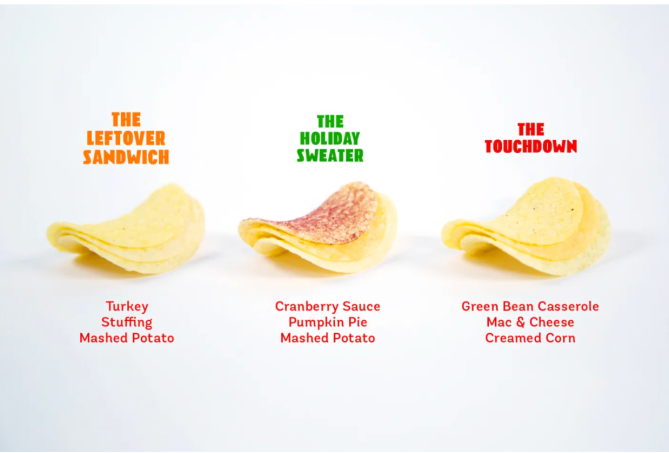 In 2018 they returned with an adapted line with only the three most popular flavors—they dropped creamed corn! They sold out in hours at $14.99 for a three-pack. Want some? It’ll only cost you $5000 (plus $4.20 shipping) on eBay.

And returned with another “winner” in 2019, Turducken Pringles, selling out within hours and crashing the Pringles website with these fowl-flavored chips. Their Roasted Turkey chips went out nationally with a challenge for fans to Tweet their favorite past of present horror stories. “We said to ourselves, ‘If we’ve managed to capture perfect, fresh-out-of-the-oven Roasted Turkey flavor in a Pringles crisp, and we don’t use it to save people from their nasty-out-of-the-oven turkey fails, then who are we?'” said Gareth Maguire, Senior Director of Marketing for Pringles.

You might to need to wash these down and for several years Jones Sodas came to the rescue with a series of drinks: Turkey & Gravy or Tofurky & Gravy (vegan-friendly and sugar-free), Green Bean Casserole, Mashed Potato & Butter, Fruitcake, and Cranberry. 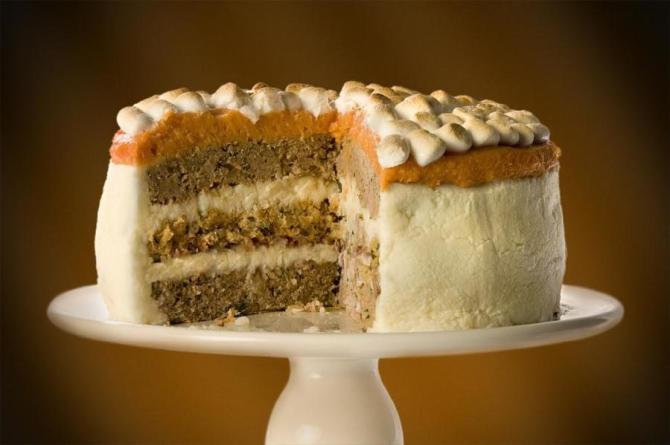 Pumpkin Pie Fortune Cookies, Harry Potter Bertie Bott’s Jelly Beans Bag included Mashed Potatoes and Gravy beans, Turkey Gravy Cranberry Cupcake (a turkey-flavored cake that’s baked with savory turkey gravy, filled with cranberry relish, and topped with cranberry cream cheese seems to have been dropped from the menu at Yummy Cupcakes in LA), Thanksgiving Gumballs (Pumpkin Pie, Cranberry and Turkey), from Britain there is Turkey & Stuffing WeirdOughs flavoured mini doughnuts, and of course Spam Oven Roasted Turkey. Salt & Straw tried a five course dinner in ice cream. It was a success and they continue to offer variations. To see and learn more about these and others delectable check out this list on Guff. 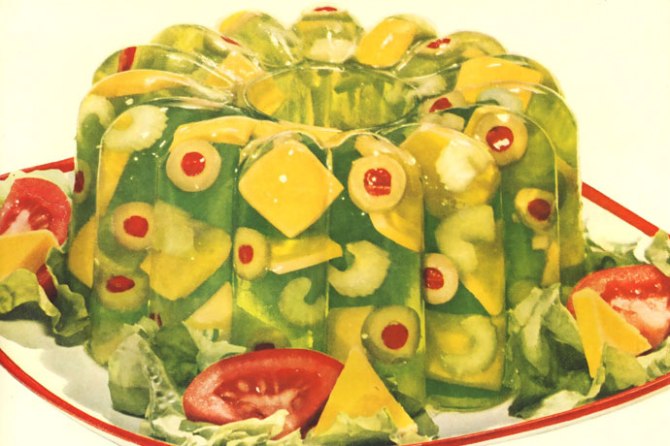 I dare you to Google “Jello turkey.” Here are a few you might find.

And don’t forget topping a pizza with leftovers. 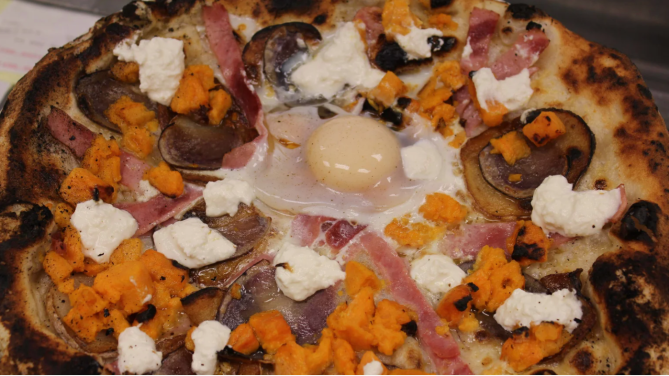 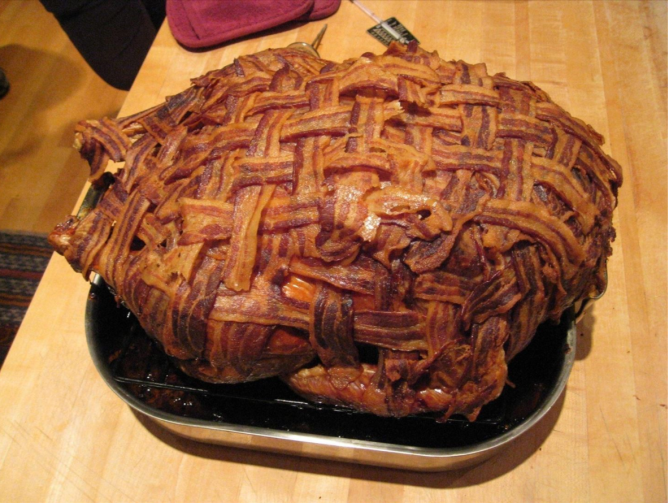 The folks at Epic Meal Time wanted to top their “TurBaconEpic” with “Turbaconepicentipede.” Inspired by the 2009 film, Human Centipede, they stuff a Turbaconepic inside of 10 whole pigs and then attach them to one another.

Joyce Slayton of Chowhound hilariously wrote about making Twinkies Stuffed Turkey from the Twinkies Cookbook, “When the turkey emerged, with its crisp, gold skin streaming rivulets of thick white goo that melded with the turkey juices in the roasting pan (ruining any chance I had of making decent gravy), things didn’t look good. I lifted a forkful of stuffing to my lips. Oh, dear God: cake doused with poultry grease. I quickly took a bite of turkey to try to erase the taste. Turkey, not too dry, normal flavor. And vanilla—sweet, sweet vanilla—mixing with the taste of roasted bird, the vilest thing I’ve eaten in a long time.” That was in 2012 when Hostess announced that they were going out of business but they were saved and Twinkies are still around for the brave,.

And for the even braver there is Roast Turkey with Popcorn stuffing.

You need to wash this all down with something. How about Wild Turkey Bourbon? The Most Popular Thanksgiving Foods in All 50 States, Mapped 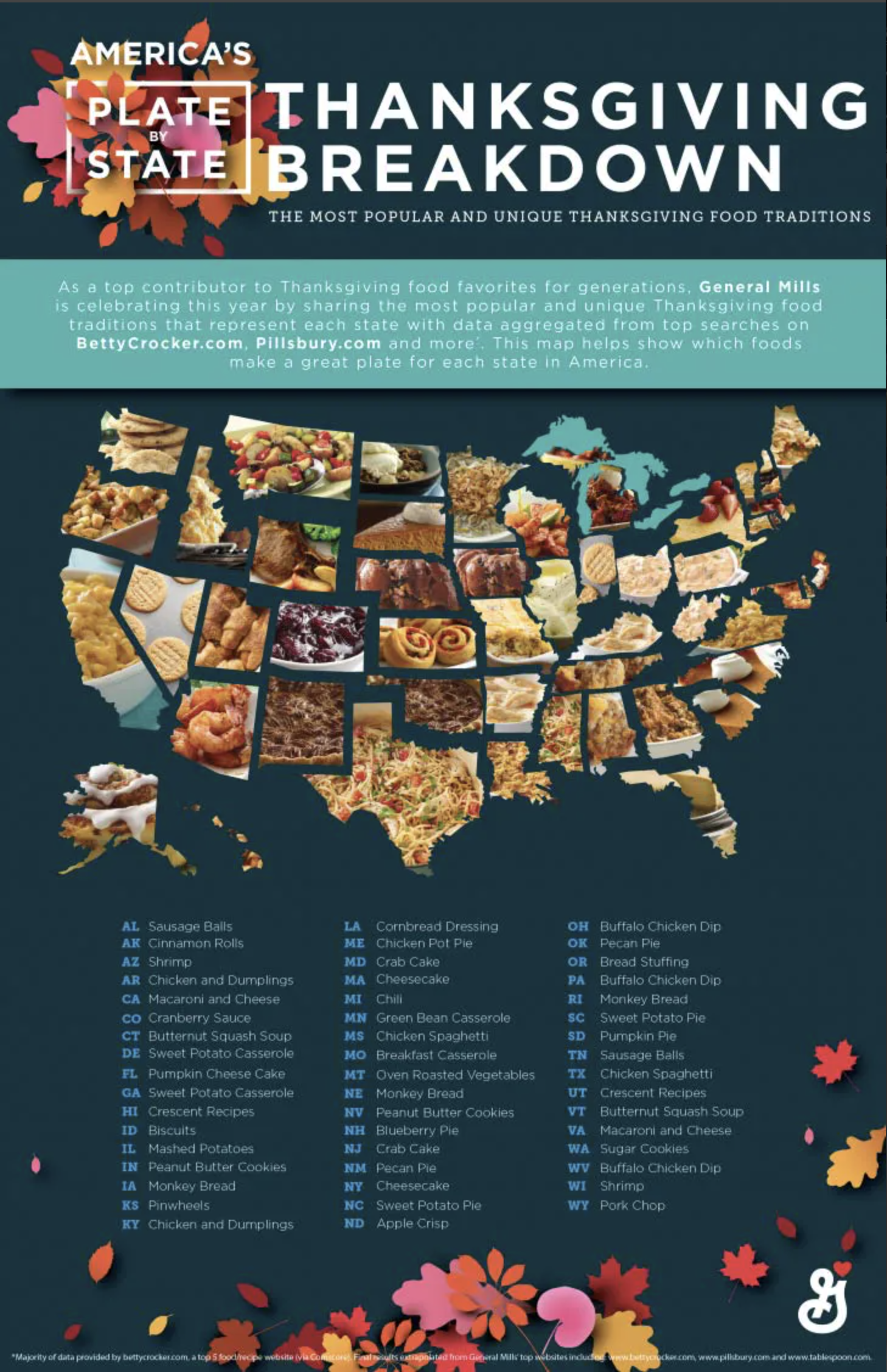 Buzzfeed shares some of the most gross holiday recipes they found on social media.

But don’t blame people for having fun and enjoying what they like. The big companies have been pushing recipes that will gross you out for years.

How can you resist Cranberry Mayonnaise Jello Salad Candles. For details. 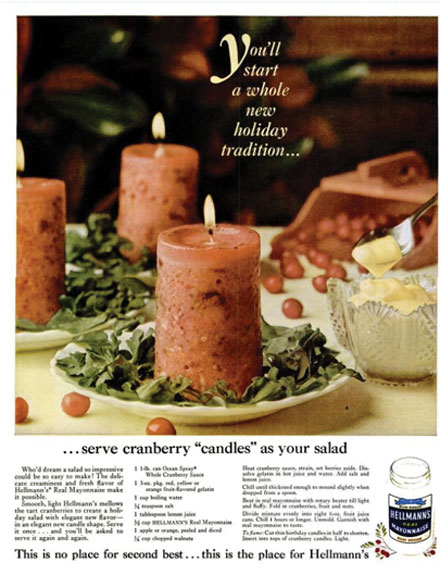 I have been searching the Internet for days, laughing a lot and getting hungry. I must stop because if you have gotten this far you surely want me to stop.

And this turkey is hungry. Gary Meyer started his first theater in the family barn when he was twelve-years-old. He directed a monster movie there and wanted to show it on the set. It became The Above-the-Ground Theatre screening dozens of silent films with music arranged from his parents’ record collection. Over 250 films were screened along with live productions, workshops and the publication of a literary/arts/satire zine, “Nort!” and a film newsletter, “Ciné.”  After film school at SFSU he calls his first job as a booker for United Artists Theatres “grad school” that prepared him for co-founding Landmark Theatres in 1975. It was the first national arthouse chain in the U.S. focused on creative marketing strategies to build loyal audiences for non-Hollywood fare. After selling Landmark, he consulted on many projects including Sundance Cinemas and the Brooklyn Academy of Music’s Rose Cinemas, created several film festivals including the Dockers Classically Independent Film Festival and Tube Film Festival for the X Games, and resurrected the 1926 Balboa Theatre in San Francisco. Meyer joined the Telluride Film Festival in 1998, becoming a Festival Co-Director in 2007-2014.  He founded the online magazine, EatDrinkFilms.com in April 2014 and consults for festivals while offering pro bono advice to independent filmmakers and cinemas. He started EatDrinkFilms to give a voice to writers wanting to explore food, beverage and the movies from unique perspectives. Meyer, Editor/Publisher, also contributes articles.

2 thoughts on “Would You Eat This? Thanksgiving Special”