To tell you the truth, my dear film buffs, I’m a reader, not a moviegoer, and I only read fiction.  If I watch a movie, it has to be in a movie house on a big screen and it has to promise a good story, ideally involving sex.   Documentaries, for me, are a bore. 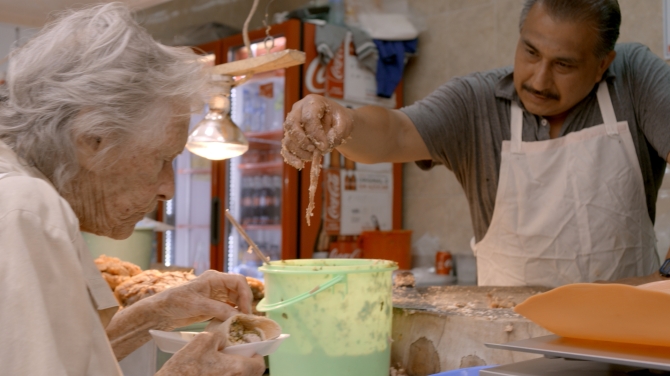 But despite all odds, I was mesmerized by a new documentary on the life of Diana Kennedy, the grouchy, 97-year-old writer of regional Mexican cookbooks, by first-time movie director Elizabeth Carroll.  The film felt novelistic to me—nuanced, revealing, true.  It picked me right up from a desk chair in front of my little computer screen and dropped me in the upland forests of Michoacán.

On the face of it, Kennedy, would not seem to be a great candidate for a movie star.  We in the food world know her as the groundbreaking, self-trained British anthropologist of regional Mexican food.  From Chihuahua to the Yucatan, she traveled the length and breadth of Mexico by third-class bus and covered Nissan pick-up (where she often slept), following the trail of indigenous ingredients through village markets to home kitchens.

There, she meticulously took down the techniques that transformed these food stuffs into traditional and sometimes iconic dishes, developing recipes that might work in American kitchens —if you could get your hands on the ingredients.  The ingredients are non-negotiable to Kennedy. She insists on the importance of the right chile.

As one of the earliest and fiercest proponents of ecological living, edible gardens, water conservation and local self-sufficiency, she pre-dates Alice Waters.  She very much earns her place in the small pantheon of great teachers like Paula Wolfert, Marcella Hazan and Julia Child, who expanded the scope and purpose of the cookbook.  They made authentic world cuisines accessible to the American home cook. 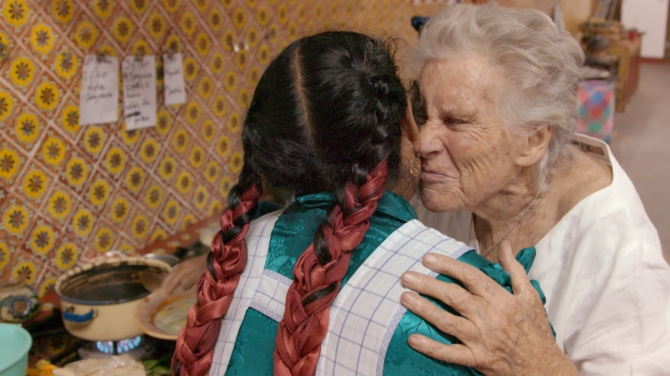 Kennedy is difficult, aggressively opinionated and tends toward mean on camera, but she melts in the markets and kitchens of the residents of rural Mexico. What I love about this film is that the director captures the tension between the two Dianas: one a naughty, independent, judgmental bad girl, and the other an admiring, curious, gracious collector of culture.

Carroll’s touch is artistic. Every scene, every clip, every minute of original footage, reveals character.  I was particularly taken by the meeting at the end of the movie between Kennedy and Gabriela Cámara, a woman who’s a true artist herself; so warm and charming that even Kennedy falls for her. Cámara is responsible for one of the best restaurants in all of Mexico, Contramar, plus the unique Cala in San Francisco and My Mexico Kitchen, her own opinionated and political cookbook.

This film gives you an intimate look at a woman who’s still razor-sharp despite her age, who demands respect, and who remains a fierce guardian of her own work.  For Diana Kennedy, taste and sensibility mean everything.  That Cámara is sincerely down with all this—and also happens to be the next in line when it comes to an authentic Mexico City voice—makes for a thrilling contrast.  We get a spontaneous and original climax from a director who really knows how to create a good story.

Nothing Fancy: Diana Kennedy is showing in Virtual Cinemas across North America. This is a program that allows independent art cinemas to present movies they would have been showing in their actual theaters if not for Covaid19. Admission is via a “virtual ticket” with the distributors/filmmakers and theaters splitting the admission cost.

The entire conversation can be watched anytime by clicking here.

She grew up in Evanston, Illinois and graduated from Stanford University, attending the graduate school of journalism at the University of California, Berkeley. After taking basic French cooking classes in the home kitchen of Josephine Araldo and practicing recipes from Julia Child, she opened a small restaurant in Berkeley in the early seventies called the Beggar’s Banquet. She started writing as the Underground Gourmet for New West Magazine. In 1979 she opened the Hayes Street Grill in San Francisco with three partners–Dick Sander, Ann Powning and Robert Flaherty. Unterman and Sander had Vicolo Pizzeria in an alley behind the restaurant from 1984 to 2004.

In 1979 she also became the restaurant critic for the San Francisco Chronicle, a job she held for the next fifteen years. Later, after writing the San Francisco Food Lovers’ Guide, she joined the San Francisco Examiner as a restaurant critic and food columnist, and wrote about food and travel for her newsletter/website Unterman on Food. She contributed the “Forward” for FrenchRoots: Two Cooks, Two Countries, and the Beautiful Food Along the Way by Jean-Pierre Moullé and for The SlantedDoor: Modern Vietnamese Food by Charles Phan. She currently writing a new piece for The Threepenny Review.

Patricia is a founding board member of CUESA and the Ferry Plaza Farmers’ Market where she shops for the restaurant every Tuesday and Saturday. The Hayes Street Grill has operated a popular food stand at the Saturday Market which will hopefully return soon after the pandemic is gone.

Explore some of Diana Kennedy’s recipes on EatDrinkFilms.

At 95, Mexican food expert Diana Kennedy is growing her own coffee and making her own tortillas by Amy Scattergood, Los Angeles Times