I knew Stan Laurel personally. In 1960, I sat with him in his living room and talked about the old days. Well, he did most of the talking. I was only nineteen. In our conversation, he told me about their tour to Great Britain in 1953. Jump forward 59 years and I’m sitting in a movie theater waiting for the curtain to go up on STAN & OLLIE, the film about that very tour. John C. Reilly and Steve Coogan do a great job portraying the two comics. But oh my, what the film missed!

First of all, we see them beginning their tour in London. They actually began in Ireland. Harmless enough -artistic license- except for one crucial point. Laurel told me how their arrival in Ireland was the most memorable day of their entire career. This film missed that event.

They embarked on this tour expecting no great audiences because, as he told me, it had been years since they made a good film. But as they pulled into the port of Cobh a few miles from Cork, the dock was packed with excited crowds. Boats full of people filled the harbor. They had no idea what was going on. As Laurel said to me, “I thought the bloody Pope was there!”

Their puzzlement ended when, to their utter astonishment, the bells of St. Colman’s cathedral sitting on a hill overlooking the port, rang out with their theme music, “The Song of the Cuckoo.”

Everyone was there for them! The two men were moved to tears.

On land they were greeted by the Lord Mayor of Cork and a throng of adoring fans. They were so touched, Laurel told me, that the boys wanted to go to a bakery to get some cream pies to do some slapstick for the children but couldn’t. All the bakeries were closed. The whole town had shut down for their arrival. 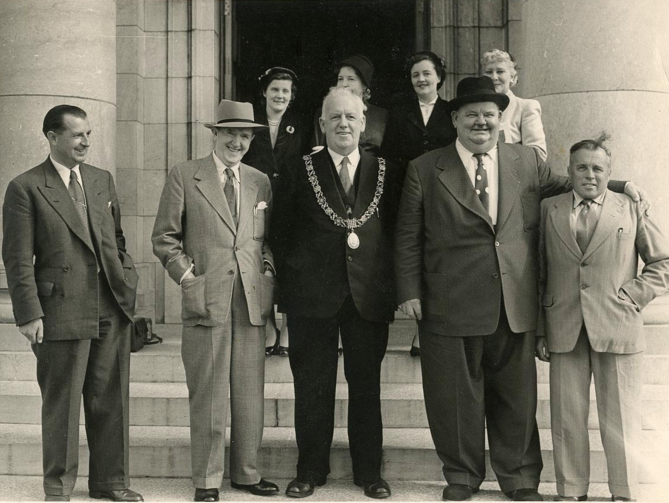 With the Mayor of Cork

Because they had to leave so quickly for Dublin, Laurel lamented, they never got any of the press about this most memorable day. So, when I decided to go to Europe in 1962, I told Laurel I would make the trip to Cork to get the press for him.

When people in town learned that I was there on behalf of Stan Laurel, their excitement was immediate. “You’re bein’ a friend of Mr. Laurel’s! Well, have you met so and so? He was there that day!” 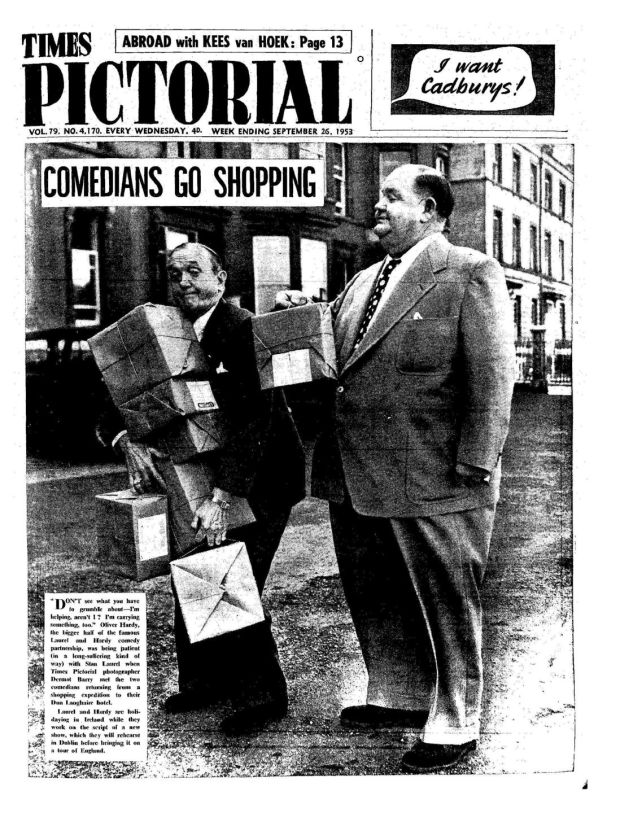 It was as if the two comics had been there only days earlier instead of nine years ago. The phones began ringing and before I knew it I was on a train to Cobh to meet Dr. Staf Gebruers, the man who played the bells for them that day.

He greeted me on the steps of St. Colmans Cathedral after Sunday night mass and was so delighted to meet a friend of Laurel’s that he offered to play the bells special for me. On parting he asked that I write Laurel and ask him to send an autographed photo of Laurel & Hardy that he could put in the church sacristy. I wrote Laurel who fulfilled the request. The good Doctor wrote to assure me that he had received the photo and that it now sat comfortably in the sacristy. 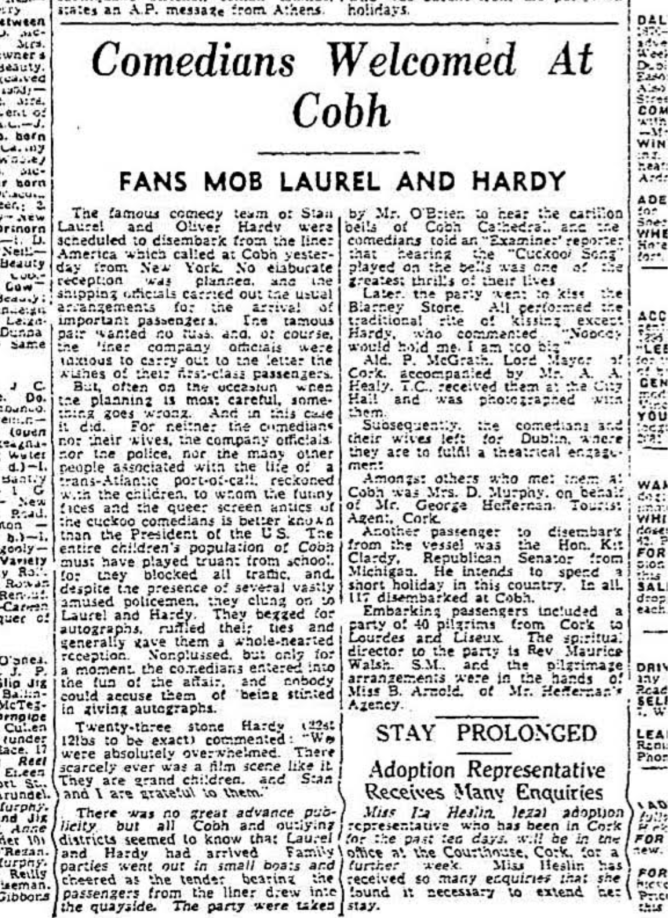 From the Cork Examiner, 1953. This is the article I hand copied for Laurel.
Note: it says they arrived in Cobh from NY on the America.

I found an English blogger who knew the accurate story of their Irish arrival and was an advisor on the film. I wrote him asking why this moment was not enacted in the movie but did not hear back.  The blogger’s blog: 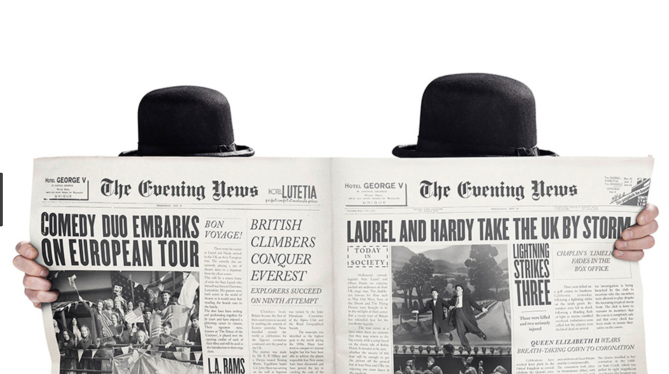 STAN & OLLIE shows them opening in London to small houses that get better as they travel through England and Scotland. We see their squabbles, their dashed hopes of raising enough money for a new film. But their arrival in Ireland? We see them arrive to cheering crowds with their theme music playing vaguely in the background. There is no clue that the music was actually played on church bells or any hint of their low expectation followed by sudden exaltation. The most memorable day of their career was excised. It’s like winning an Oscar and then the biopic on your life makes no mention. 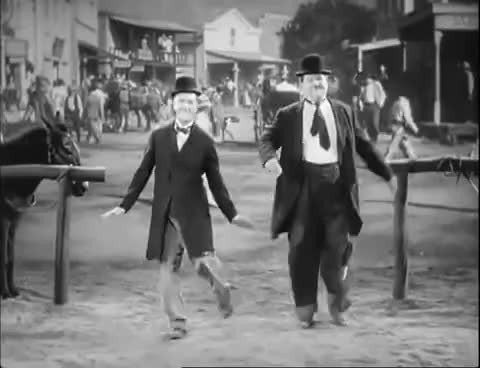 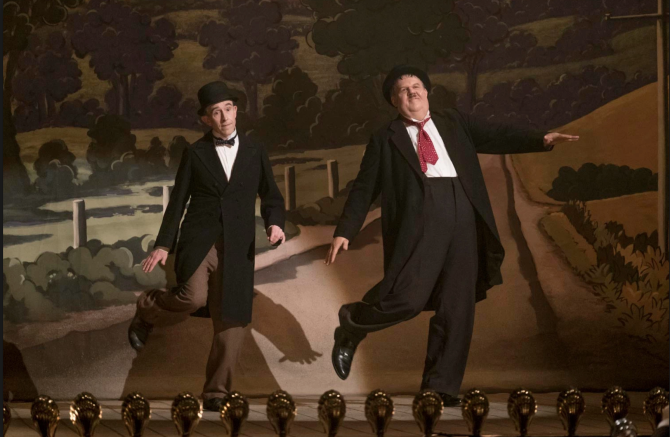 The heart grab moment the film has missed. Instead we get the tour of no great shakes. Too bad. Sorry Stan. 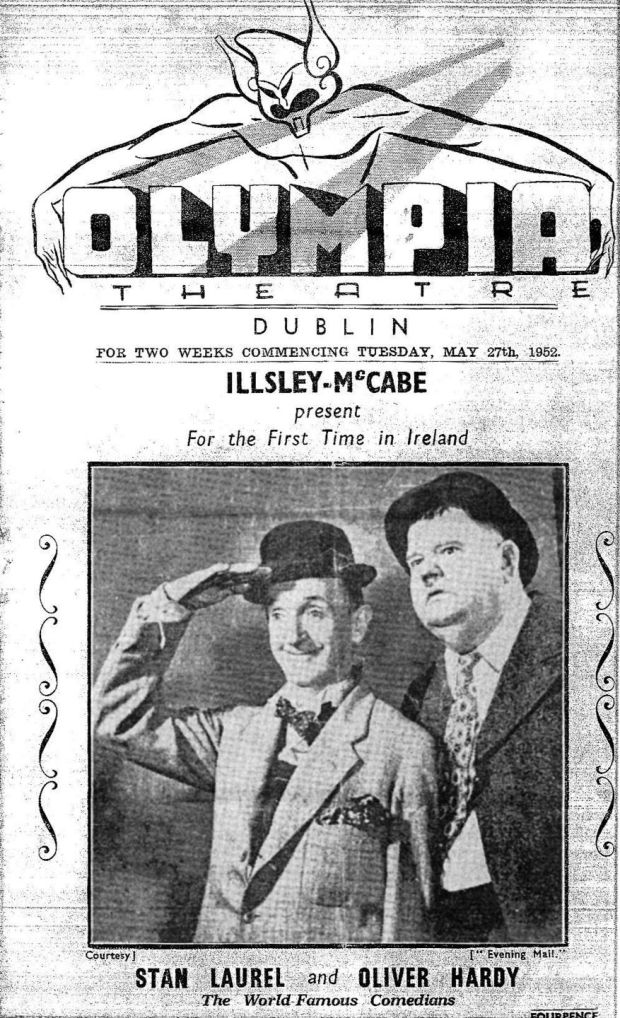 In the film, O’Reilly gets one Hardy move wrong. In the Robin Hood scene when he falls backward into the water, exits exasperated, and wipes the water from his eyes. He gets the wipe all wrong. I could show you how O’Reilly did it and how Hardy would have done it.

The difference is the line and the music of the gesture.

It also belies the blind spot of his observation ability that he did not understand this.

They needed me there.

Stan told me that a package once arrived at his door addressed to Charlie Chaplin. They came over to the US together in The Fred Karno Pantomime Company. Stan had been Chaplin’s understudy. He phoned Charlie and went over to give him the package. They spent a glorious day reminiscing about so many things. But whenever Laurel phoned him again to get together, Chaplin never phoned back. That hurt him.

It also killed Stan to see his films on TV cut up and reduced to as little as 15 minutes with advertising. He offered to edit his films for TV for free, and never had his calls returned.

Over Easter weekend in April, you can see Stan Laurel & Oliver Hardy in some of their greatest films in beautifully restored DCPs.!
Saturday, April 20, 7:30pm at the Aero in Santa Monica, the restored versions of Laurel & Hardy’s great feature, Sons of the Desert; also screening two great shorts,  Brats and Helpmates:
Sunday, April 21, 2:00pm at the Egyptian in Hollywood, four terrific restored shorts: Come Clean, Hog Wild, The Chimp, and the greatest pie fight in history, The Battle of the Century.
To keep up on more showings check out the Laurel and Hardy website and Facebook page.
For lots more about Laurel and Hardy on EatDrinkFilms check out Paul F. Etcheverry’s THE BOYS ARE BACK IN TOWN and for lots of great clips our special edition of EAT MY SHORTS: Laurel & Hardy. 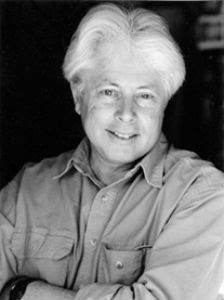 Leonard Pitt met Stan Laurel during his college days in Los Angeles. He is an actor and author who has also written three books on Paris, Walks Through Lost Paris, Paris a Journey Through time, and Paris Postcards: The Golden Age, plus A Small Moment of Great Illumination. My Brain on Fire, Paris and Other Obsessions, was released in 2016.

Pitt was born in Detroit, Michigan in 1941. After a short career in advertising design he sailed to Europe, landed in Paris in January 1963, and stayed for seven years, assisting, studying and performing with Etienne Decroux for four years.

Leonard returned to the United States in 1970 and settled in Berkeley, California where he opened a school of physical theatre, attracting students from around the world. Leonard’s one-man shows have received critical acclaim. He has performed and taught at theatres and festivals throughout the United States, Europe, Brazil, New Zealand, and Australia. He was also a member of George Coates Performance Works and traveled widely with the company.

In 1973 he traveled to Bali to study Balinese mask theatre. While there he was invited by his teacher to perform with him in local village and temple festivals. He returned to Bali in 1978 to study mask carving.

In 1986 he co-founded Life On The Water, a contemporary theatre in San Francisco presenting new work.

In 1991, Leonard created Eco-Rap, an environmental education program combining ecology and rap music as a way to educate inner city youth about urgent social issues. He operated the program for five years.

He has performed and taught around the world and lives in Berkeley, California.

Leonard, his home, collections, passions and his art are featured in a Quirky Berkeley feature.