Bel Powley has pillow lips and enormous eyes, wide and nicely spaced; her eyes do her acting for her the way that, back in Hollywood’s Golden Age, Bette Davis’ eyes worked for her: slightly protruding, always alert, they register the slightest emotion like a thunderbolt has hit the screen; the nervous system jumping into a system of visual shows and tells that can get fatiguing after awhile — at least people got tired of Bette Davis, and refused her Oscars for All About Eve and Whatever Happened to Baby Jane?, but Bel Powley doesn’t have to worry about middle age yet, she has it all over Kristin Wiig, who plays her mother in Diary of a Teenage Girl, the new feature based on Phoebe Gloeckner’s renowned 2002 graphic novel, and laid, like Tales of the City, in the San Francisco of the Bicentennial years: fern bars, promiscuous sex, and young people living by their wits while confronting the slightly sinister charms of their more seasoned love partners.

These monsters are real: A panel from Phoebe Gloeckner’s The Diary of a Teenage Girl, and the main characters from Marielle Heller’s film version.

Powley plays Minnie, a school girl attending what looks like the Harvey Milk Photo Center on Scott Street, but must be a private prep school like the one Alysia Abbott attends in Fairyland, her own memoir of growing up fast as the daughter of a flighty, drug-addled parent. Wiig is perfectly fine playing the mother, but the screenplay gives her only one scene (sort of like the Bechtel test) in which she’s not interacting either with Minnie or with Monroe, her adorable boyfriend (Alexander Skarsgård). Well, he’s sort of adorable, but the movie opens with Minnie, who looks like she’s 15 or so—a Bette Davis sort of 15—announcing that she’s just had sex for the first time, with her mom’s boyfriend. I actually think they fudge Minnie’s age a little bit in the movie, while they make Monroe more sympathetic than he is in the book, and the drug and sex scenes, while hypnotic and well-handled, are nowhere near as existential as in Gloeckner’s original. There’s a Hitchcock-type appearance by Gloeckner, who appears seated at a fern bar, shocked by what she overhears from Wiig, Powley and Skarsgaard having one of their showdown scenes, but she might almost be registering, “What happened to my monsters?” 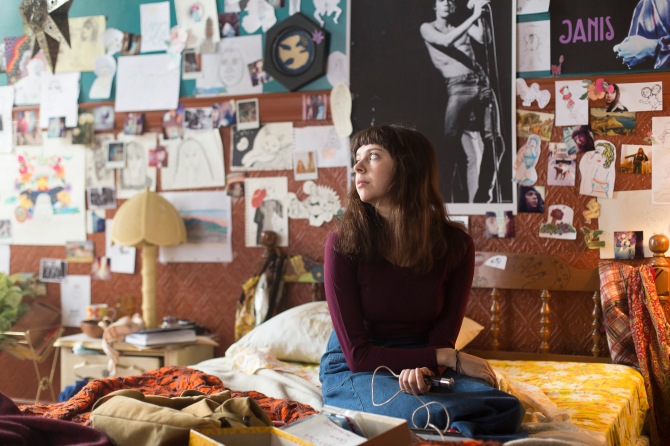 Minnie (Bel Powley), with Iggy but without “Domino,” in the film version of The Diary of a Teenage Girl.

I was enchanted by the way the movie made San Francisco look as if forty years of development had been shaved off like a bad perm. I spent the summer in San Francisco in 1976, the summer Elvis died, I was here, and the filmmakers have it almost exactly the way I remember. I didn’t like the cat, “Domino,” much. But Domino, like Kristen Wiig, gets sort of shortchanged in the movie. He has one big scene within the first minutes of the picture, when Minnie asks him, “Do I look different today now that I’ve had sex than I did yesterday?” and he makes a revolted face—the only piece of CGI in the movie that doesn’t succeed. And then you never see him again. Most of the time, cats in movies just get bigger and better feels every time they appear. The movie is a triumph for the actors and director, it hurts but not too much, and it looks fantastic, but that darn cat must belong to someone on the set who has an overinflated opinion of his beauty and talent. It’s like Darryl F. Zanuck trying to persuade the public that Irina Demick or Genevieve Gilles is a great actress. Just doesn’t fly.

Kevin Killian as Mr. Green in Phoebe Gloeckner’s The Diary of a Teenage Girl.

Kevin Killian, one of the original New Narrative writers, is the head of the SF Poets Theater. He has written fifteen books and up next are a book of stories from Semiotext(e); a sequel to his recent collection (Tagged) of nude photographs of poets and artists, and Eyewitness, an as-told-to book by the ’50s poetry legend Carolyn Dunn (Granary Books).

Also in this issue, read other reviews about  The Diary of a Teenage Girl by Dodie Bellamy, Janelle Hessig, Kevin Killian, Lynn Rapoport and Trina Robbins.

To learn more about The Diary of a Teenage Girl and its author Phoebe Gloeckner: