Seventeen years after he made his directorial debut, actor Alan Rickman has stepped back behind the camera again to make A Little Chaos. Rickman himself plays French king Louis XIV—a monarch with a yen for a new palace at Versailles—in this period romantic drama. Kate Winslet is Sabine de Barra, a widow who bucks the odds and the era’s conventions, when she is chosen to design one of Versailles’ gardens. Matthias Schoenaerts takes the role of André Le Notre, the palace’s master landscape architect attracted to Sabine.

A Little Chaos made its world premiere last fall as the closing night selection of the Toronto International Film Festival. With the evening’s festivities still ahead of him, Rickman took some time out of his day to talk about his sophomore effort.

Eat Drink Films: A few years ago you starred in a movie called Bottle Shock about a Napa Valley winemaker. Like it, A Little Chaos is very much about a connection to land, whether it is those Napa vineyards or the gardens going in at Versailles. Is part of the appeal of these stories your own affinity for outdoor environments?

Alan Rickman: I love looking at landscapes and maybe it’s my art school background or something, but I love the idea of people in landscapes, man-slash-woman in nature. And I love vineyards. I always get moved by vineyards, because you think, “This is ancient, what I’m looking at. It’s 2014 and I’m looking at something that hasn’t changed.” People haven’t found another way of doing it, except plant the damned thing and then watch it grow and then pick the grapes and then mix them. I spend a lot of time in Italy and just seeing hills full of vineyards is very moving to me.

EDF: You last directed a movie 17 years ago. What was it about this project that made you step back behind the camera?

AR: The only reason it’s been a while is because I was just not free, because of the seven weeks every year that I was showing up for Harry Potter, and that’s enough not to make you able to direct a film, as I discovered. When I started there were only three of them written. (Laughs) It wasn’t like I knew it was going to be that long. I was directing in the theater in between times, and doing lots of other work in the theater or on film in those 40-whatever other weeks.

But, yeah, this is 18 months of my life, this film and you’ve got to know that that’s available when you’re directing or even thinking about it. The script had been there for a lot of that period, waiting, quietly being developed between me and [screenwriter Alison Deegan]. I think with a bit of hindsight now, you just go, ‘Well, any sooner and Kate would have been too young to play the part.’ And it’s so her part that I can’t imagine anybody else, so it’s like the film was waiting for her.

EDF: This is a period drama, but how much of it was informed by your own past visits to Versailles?

AR: What I loved about the script is what people say to each other and then the story of Kate’s character and Matthias’ character growing slowly together. That could have been set anywhere at any time. It so happens that Alison is fascinated by that period and it also so happens that she’s reckless with it, because Kate’s character could never have existed. Matthias’ character was 70 at the time the story takes place. Hey ho, it’s a movie, everybody, relax. It’s fantasy. Let go, you’re at the movies, and we’re stealing history here. In that sense, the background is crucial, but unimportant. What’s important is that it’s a background that says it was a time when women had a rough time surviving and having any sense of themselves. They were there to be decorative, and God forbid, they got older, because they’d be dumped. Weirdly, that still goes on today.

It’s still a man’s world to a large extent. Yesterday, I was watching a rerun of Barbara Walters’ last show on The View, because I’d been on that show, and she’s great, Barbara Walters, and unique. And just realizing that when she started, there was a co-anchor who refused to sit on the desk with her. Then at the end of the show, they brought on all the women, Diane Sawyer onwards, that came after her. That was quite something. And, of course, this script was written by a woman. It’s those stubs that as a man getting involved in it, you’re forced to kind of put the skids on and ‘Well, I have to look at this and think about this one and not get in its way.’ All of that was interesting to me, as much as, if not more than, what the background is. The background is what it is and you have to honor it and gather the right people around you and go to Versailles and spend time reading about the period.

EDF: What struck you about the period as you were doing your research?

AR: I didn’t know that Louis had built Versailles in the most ridiculous place he could have chosen just because he liked the view. It was a swamp, a mosquito-ridden swamp. People were bitten to death building it. They were wading through swamp water. Thousands of people died building this fantasy of his. Fantasy and reality is always interesting when you see them collide. The whole water thing in the film is true. There wasn’t enough water pressure, and, in fact, whenever he went on one of his tours of Versailles, they actually had a guy turning off one fountain and then running forward to turn on the next one. There was never any sense of them all going at once.

When we went to Versailles, the guide pointed up at the ceiling, which has the glorious fresco in the Hall of Mirrors, and he said, ‘Of course, the fact that every night, they had to light 10,000 candles to light up Versailles, meant that pretty soon after that fresco was finished, it was black. Almost none of them ever saw it.’ And the fact that Versailles wasn’t even finished when the lords and ladies moved in, so they were all living in a building site. It’s when you want a time machine, ‘Please, let me go back to see what it was really like.’ 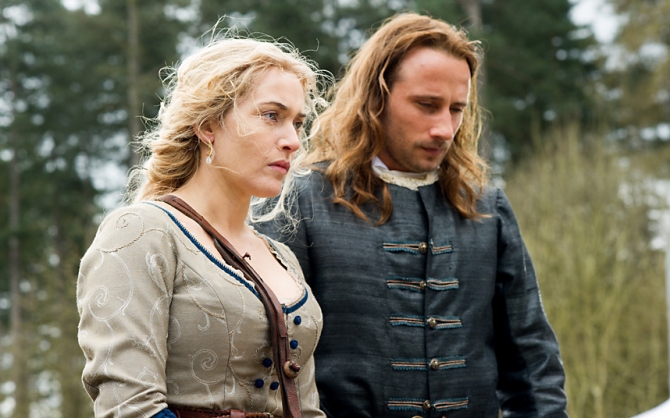 EDF: There’s a lot going on in this film. You’ve got her situation as a widow trying to survive in a man’s world. You’ve got everything that’s going on in the court. You have the building of a palace. You have a romance developing between the widow and the master landscaper. Plus his bad marriage.

AR: And then 80 extras suddenly show up and there are horses and carriages. Then doing a carriage crash, it’s like action-movie time and I’ve only ever done one action movie. Thank god, on a film, you’re surrounded by people who know what to do. We’d storyboarded it; we knew exactly what was supposed to happen. But then you have to make it happen, and that’s a lot to do with wires and things. It’s a great group effort making a movie, and everything’s there to support the idiot who says, ‘I think we’ll do this.’

EDF: Well, did you feel like a little bit like Louis building your own Versailles with this film?

AR: It is similar. You have some mad idea and then you stand there watching while all these minions run around making it happen.