When Fox Searchlight Pictures released the Oscar-winning independent film Sideways in 2004, it set the bar for wine movies for years to come. More provocatively perhaps, it took only a couple of brief lines of disparaging dialogue for the film to adversely impact the market for Merlot wines throughout the US. 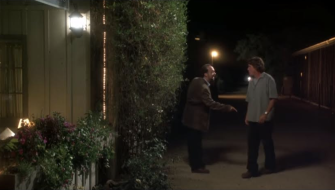 As a result, a widespread perception developed in the wine trade known as “The Sideways Effect,” a belief that the film suppressed Merlot sales and boosted demand for Pinot Noir, another red wine that’s extensively praised throughout the movie. Despite the demonstrable impact of this trend, a recent Merlot wine tasting and panel discussion at November’s Napa Valley Film Festival following a tenth-anniversary screening of Sideways found the variety maintaining popular support with winemakers and consumers alike.

From a critical perspective, writer-director Alexander Payne’s fourth film remains a favorite with indie film enthusiasts for its telling humor, outrageous situations and warmly memorable characters, not to mention its virtual obsession with wine production and consumption. An R-rated buddy comedy that follows two 40-something guys taking a road trip to Santa Barbara county to sample local wines and play some golf, Sideways stars Paul Giamatti as Miles Raymond, a struggling writer and middle-school English teacher from San Diego, alongside Thomas Haden Church as part-time actor Jack Lopate. With Jack’s wedding rapidly approaching, the pair arrive in the Santa Ynez Valley region, renowned for its extensive range of wineries and vineyards, to cut loose for a week. 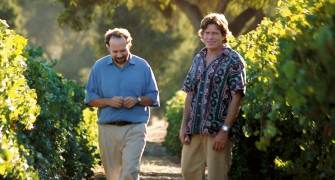 Miles is a regular in the local restaurants and winery tasting rooms, where he’s well-known for his passion for Pinot Noir, a specialty of Santa Barbara vintners. The film’s initially innocuous plot turns on Jack’s determination to hook up with almost any available woman during his bachelor-celebration trip, despite Miles’ vociferous disapproval. Jack’s plan is set in motion after an encounter with Stephanie (Sandra Oh), a pourer at the Kalyra Winery tasting room, when he invites her to join him and Miles for dinner, along with Maya (Virginia Madsen), an acquaintance of Miles’ who’s a server at the popular Hitching Post II restaurant in Buellton. As the men are preparing to meet their dates at the Los Olivos Cafe , Jack admonishes Miles not to interfere with his plans to seduce Stephanie. “And if they want to drink Merlot,” Jack insists, “we’re drinking Merlot.” 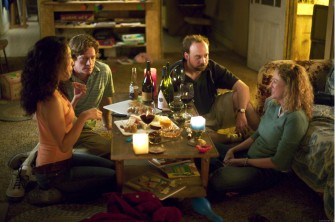 That offhand comment prompts the two vehemently delivered lines that spawned The Sideways Effect, as Miles retorts, “No! If anyone orders Merlot, I’m leaving. I’m not drinking any fucking Merlot!” As a result, the group samples mostly white wines and Pinot Noirs with their meal, avoiding any further clashes with Miles’ biased tasting preferences. Sideways went on to receive five Academy Award nominations, including one for Best Picture, while Payne and co-writer Jim Taylor won a Best Adapted Screenplay Oscar for their script, based on Rex Pickett’s original novel.

Moving on wasn’t quite so simple for Merlot producers and retailers however, as a consensus grew within the wine industry that the film was damaging sales of the variety throughout the US. In fact, independent research helped support that theory. In a 2009 study published in the trade magazine Wines & Vines , Sonoma State University economics professor Steven S. Cuellar and colleagues demonstrated that Merlot sales declined slightly within approximately a year of the film’s release, although perhaps not as much as anecdotal accounts might have suggested. “Virtually all the results are consistent with the theory that Sideways had a negative impact on the consumption of Merlot,” the authors concluded, citing a survey of nationwide retail sales data.

Ten years on, Merlot winemaking in Napa has changed significantly, according to experts on the film festival’s “We’re Drinking Merlot!” speaker panel, which followed the Sideways screening in Yountville. Still, there was general consensus that the film had engendered negative attitudes regarding Merlot. “It devastated the grape and the wine,” said Wine Spectator senior editor James Laube. “It was a big risk for the first vintners to experiment with Merlot” in the Napa Valley, because it wasn’t a well-known variety decades ago, he noted. 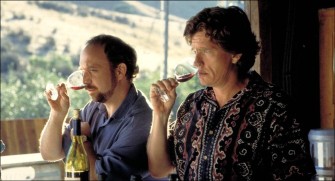 As described by Chris Carpenter, winemaker at La Jota Vineyard Co., one of the reasons that Sideways impacted public opinion about Merlot so significantly was that the variety was “already on a downslide” in the Napa Valley ten years ago. “People were planting it in the wrong places,” he observed. Merlot needs a lot of heat to ripen, and too many local vineyardsproducing the variety were located on sites that were too cool for the grapes to attain optimal ripeness. “A lot of that is gone now,” Carpenter said. “What’s left is a lot great sweet spots where Merlot is being grown now.” These spots are better-suited to producing quality wines.

The Sideways Effect was a “great” development for Merlot, added third-generation wine producer Hailey Trefethen, whose family winery has been a pioneering Merlot maker in the Napa Valley. The film’s influence helped “get rid of a lot of poor Merlot” grown throughout the region, she observed.

Winemaker Tom Rinaldi, Provenance Vineyards’ director of wine growing, noted that the grape was overproduced for decades in the valley, resulting in vintners “making boring wines.” Judging from the panel members’ frequent favorable comments, it appears that serious Merlot is back in style.

Although Sideways specifically scorns Merlot, many of these wines are actually blends of the five traditional French Bordeaux red grapes, including Cabernet Sauvignon, Malbec, Petite Verdot and Cabernet Franc. As the Napa Valley wine industry has come around to producing Merlot and blended wines with more care and attention to tradition over the past decade, the variety is seeing a resurgence among premium wine producers. “Merlot is an awesome grape, I love Merlot,” said Trefethen. “It’s very versatile when it comes to food.” Her enthusiasm was mirrored by dozens of film festival attendees lining up during the event to sample the wines being discussed by the panel. 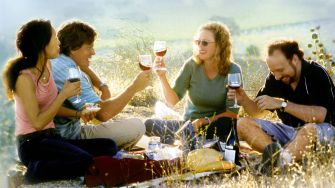 The speakers were also positive about the future of Merlot. “People are aware of where Merlot’s place is in the market now,” said Carpenter. “There’s going to be more interest in this variety as people experience what Merlot can do.” Rinaldi concurred, noting the range of styles that Merlot can take on and praising the variety’s high quality and reasonable pricing. “I think there’s going to be a lot of choice for consumers,” seeking out quality Merlots, he concluded.

“It’s going to be one of the most exciting varieties you can purchase ten years from now,” said Trefethen. “I think it has a bright future.” So when Sideways marks its 20th anniversary, it won’t be too soon for another reevaluation of Merlot’s place in the American wine scene, but for now, perhaps it’s enough to know that the negative aspects of The Sideways Effect are clearly waning. 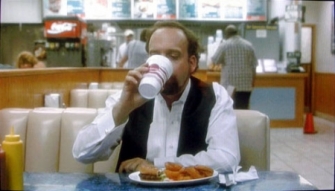 In the meantime, perhaps it’s also worth noting one of the film’s enduring ironies, courtesy of Miles. In his modest wine collection, Miles’ most prized bottle is a 1961 Château Cheval Blanc, a pricey, highly-regarded French Bordeaux wine that’s a blend of Merlot and Cabernet Franc, another variety he disparages in the film. So much for Merlot-haters it seems.

[You may also be interested in The Life of Wine, The Which-and-When of a Drink That Changes Over Time, which appeared last week in EatDrinkFilms#32. – ed.]

Here are observations on some of the Merlot wines featured at the Napa Valley Film Festival event: 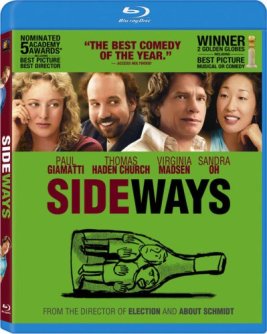 Twentieth Century Fox has recently released a special 10th Anniversary Edition of Sideways on Blu-ray. We invite you to buy or rent from your local video store or purchase it through our affiliate links with Amazon. 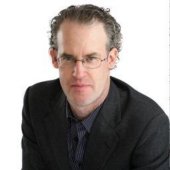 Justin Lowe is a freelance film critic and wine writer based in Los Angeles. Follow him on Twitter @SustainableVine and @CinemaPlanet