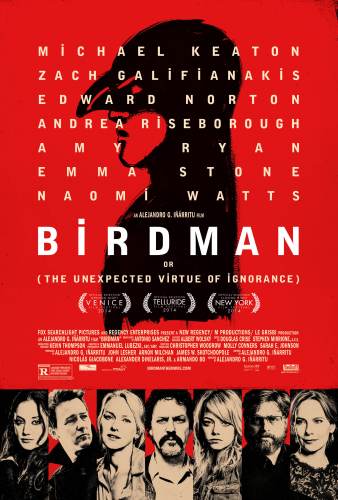 BIRDMAN: Keaton’s Believe It or Not!
by Steve Englehart

I don’t believe it.

(Meta alert: this film is completely meta, with everything in it resonating on several other levels of reality at any time. In that spirit, this review will mention that my wife tells me I can’t know what’s in Keaton’s head so I can’t say I don’t believe his story. But who’s to say that what I write in a review has any relation to reality? If Keaton can do it, so can I. That’s very meta.)

This meta alert seems to have gone on for a long time. Perhaps there’s no way to get outside the meta.) 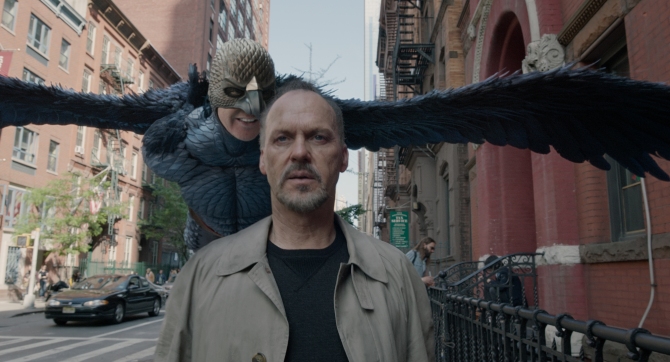 Look, if Michael Keaton’s entourage had said “Let’s create something to establish that you’re a real actor,” they could not have done a better job of it. The official story is that Alejandro González Iñárritu, the director, thought of the tale on his own and only later came to the idea that it fit Keaton to a tee. Pace my wife, maybe so, but if so, the development stripped away any ambiguity.

The storyline as presented is continually sharp and on target. It concerns a group of actors, rehearsing and then presenting a stage play. Riggan, trying to establish that he’s an actor, adapted the play from an arty author (Raymond Carver) and is starring in it, directing it, and paying for it himself. Though we may not understand everything about Riggan, we’re rooting for him, so when he runs into problems—money, other actors, girlfriends, critics—we’re invested in his winning.

Riggan’s money problems are always within him, but handled the way money problems are, by making deals. That’s how he handles his women, too, and how he tries to handle the critics. The critic is shown as a complete asshole, ready to assassinate Riggan’s play without even seeing it because he’s a superhero movie actor, not a Broadway one. The only message is, “Ignore critics.” 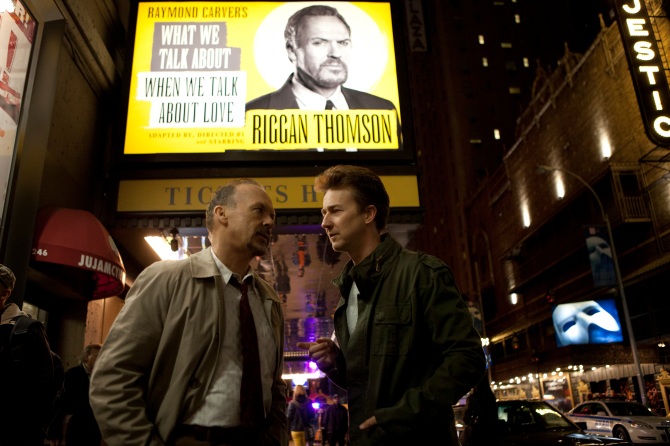 Riggan’s constant problem, however, is the other actors, especially Mike, a guy who’s younger and a current box-office draw. Is he going to help make Riggan’s play or is he going to blow it up, and show up the older man in the process? Mike is played by Edward Norton, and here is where we encounter the one small snag in this film: Norton is a better actor than Keaton. Not by much, but in my eyes, I never doubted Norton’s performance, while there was one scene, out of the entire film, where I could see Keaton working. That still gives him a very high batting average, and I don’t want to damn the guy with faint praise, which is why I established up top that I like both Keaton and his film—but that one intimation that Keaton is not quite on the same level as Norton has an outsized impact in a film devoted to Keaton’s chops.

Now, one could make the argument that Mike’s being a tad better than Riggan fits Riggan’s story. But we’re always aware that they’re Norton and Keaton. (Keaton holds his own in scenes with Norton, by the way. Keaton’s flatness comes in a monologue, possibly because he’s not going toe-to-toe with anyone.) 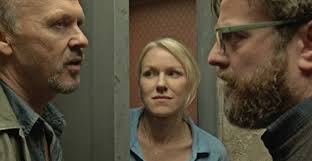 Also in the play’s cast is an actress played by Naomi Watts. As usual, Watts is low-key but completely effective—another actor who never misses a beat. The same can be said of Amy Ryan as Riggan’s ex-wife. Riggan’s daughter is played by Emma Stone, who is just a tad below the others’s skill levels, and just fine for her role as a shallow teen.

This film about a Broadway play has the heart of a Broadway play, with chances for every actor to hold the spotlight. It is continually thrilling to watch these guys work.

Iñárritu films the story in long, continuous takes, lending the conceit that it’s taking place in real life, and almost real time. The filming takes place mostly in medium shots and close-up, so the intimacy among the characters is constant. Add to that the fact that most of the film takes place in the confines of a New York theatre, with long narrow corridors, cramped dressing rooms, and a rooftop surrounded by the Theater District. We’re entirely in Riggan’s world.

So can Keaton act? Yes, he can. Is his film a good one? Yes, it is. Does he resurrect his career? I think he does, and deservedly so. Does he really find Riggan to be nothing at all like himself, as he’s said?

I don’t believe it. 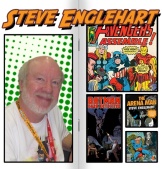 Steve Englehart has been the lead writer for both Marvel and DC on several occasions, and a founding father of Malibu’s Ultraverse. His redefinition of the Batman and the Joker as mature adults completely changed both comics and the films made from them for the last three decades, but there’s also Star-Lord, the Avengers, Captain America, Silver Surfer, Doctor Strange, Coyote, the JLA, and dozens of others. He created Kilowog and Guy Gardner for the Green Lantern Corps, and the Night Man, who got a TV series. The San Diego ComiCon said he has “more hits with more characters at more companies than any other writer.”

Click here to read Steve’s EatDrinkFilms piece about creating the adult Batman strips that inspired Tim Burton’s Batman, starring Michael Keaton.  Steve’s website is a treasure trove of stories and images. The articles on  Batman: Dark Detective  are especially relevant to this article.

We urge you to find Steve’s comics and graphic novels at independent comic and bookstores, or to order them through our affiliate relationships with Indiebound or Amazon. 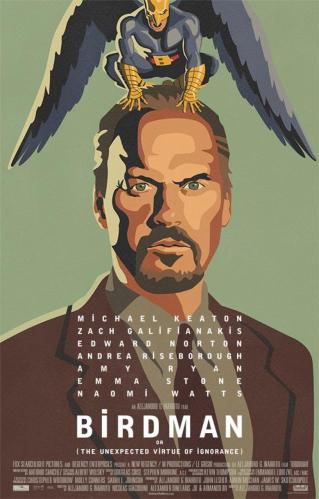 BIRDMAN: Messy, Alive and Full of Ideas
by Dennis Harvey

As the clock begins ticking down toward the inevitable, ever-more-extended awards season, it’s not too early to take a preliminary look back at 2014 and realize that this is shaping up as a not-so-hot year. Excluding the relatively low-profile foreign, indie and documentary titles that most bestowers of laurels are unlikely to consider much (if they see them at all), it’s an uninspiring landscape. Such critical favorites as Boyhood , Calvary , The Grand Budapest Hotel , Love is Strange , Le Week-End and imminent Nightcrawler are probably too idiosyncratic for wide approval. Others like the recent Pride or Whiplash , being upscale formulaic crowd-pleasers, might conversely win that approval by being not nearly idiosyncratic enough. And a fair number of the festival-premiered Oscar contenders on the horizon look all too much like your standard excuses for familiar actors to be ostensibly daring by wearing more/less makeup, saying “Fuck,” or contorting their bodies more than usual. 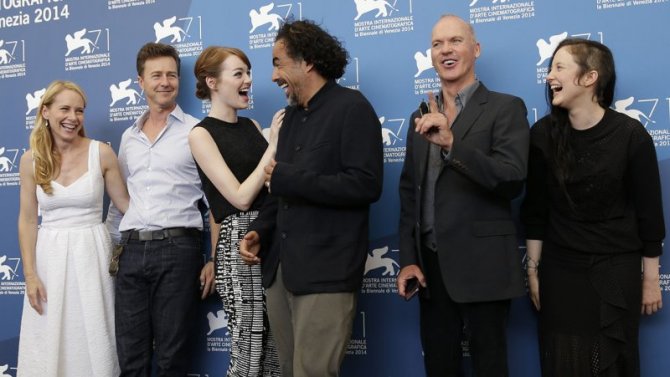 Originality that works, and actually gets noticed, is always in short supply. So there is something especially bracing about any high-profile movie that is messy, alive, imperfect and full of ideas you most definitely have not seen ten times over already this year.

Birdman is the latest, best and smallest (in physical if not imaginative scale) film to date by Alejandro González Iñárritu, the Mexican director who started out being as ambitious as possible in a trilogy of movies with his erstwhile creative partner, scenarist Guillermo Arriaga. First in the consecutive Mexico City miniatures of Amores Perros , then in the intercut multi-strand dramas of 21 Grams and globe-trotting Babel , the duo seemed to be aiming for All of Life in 150 Minutes or So—to results often potent, even dazzling in the moment, but murkier as a theoretically profound whole. After their acrimonious parting of ways, each made a lesser solo project (Arriaga another sprawling ensemble piece, the poorly received The Burning Plain , while Inarritu’s Biutiful was an over-melodramatic vehicle for an admirable Javier Bardem) that suggested they might have trouble finding their feet without one another. 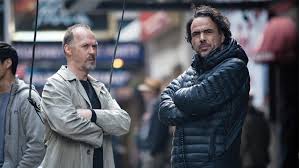 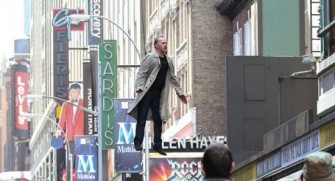 But Birdman finds Iñárritu not just walking but airborne, levitated by a conceit and giddiness almost completely divorced from his prior works. A “backstage drama” that could hardly be less stagy, it focuses on Riggan (Michael Keaton), a washed-up movie star making his Broadway acting, directing, producing and adapting debut as an act of desperation. Some years after making his name as the titular screen superhero, then refusing to play that role further, he’s found it exasperatingly difficult to establish any other professional identity. His thrashing around with the highs and lows of superstardom has already cost him one marriage (to Amy Ryan’s tolerant ex), rendered his only child (Emma Stone, infinitely better than Woody Allen or Spider-Man allowed) a cynical recovering addict, and made his latest endeavor a sort of last-ditch stab at redemption. It’s an adaptation of Raymond Carver stories called, of course, What We Talk About When We Talk About Love . And on the cusp of the first public preview, it is not going well. Taking his frustrations out on one haplessly hammy cast member, Riggan finds himself possibly facing a lawsuit, and short a secondary male lead. The replacement found on short notice is Mike (Edward Norton), a critical and box-office darling whose “Method” madness might nonetheless be what finally pushes his boss over the brink of sanity—if regular imaginary dialogues with the rasp-voiced, superheroically humorless alter-ego “Birdman” haven’t done so already.

Among those playing lesser headaches or train wreck observers are Naomi Watts and Andrea Riseborough as two temperamentally opposite actresses (cringingly insecure and bombastically self-assured, respectively); Zach Galifianakis as the long-suffering producer/agent who just might crack before Riggan does; and Lindsay Duncan as a mean old New York Times critic who, in one of the team-written script’s less imaginative strokes, admits looking forward to demolishing the famous interloper on his opening night simply because she can. (The anti-Hollywood prejudices she airs represent a bridge any real Manhattan theater critic would’ve crossed years ago, given the commercial realities of today’s Broadway.) 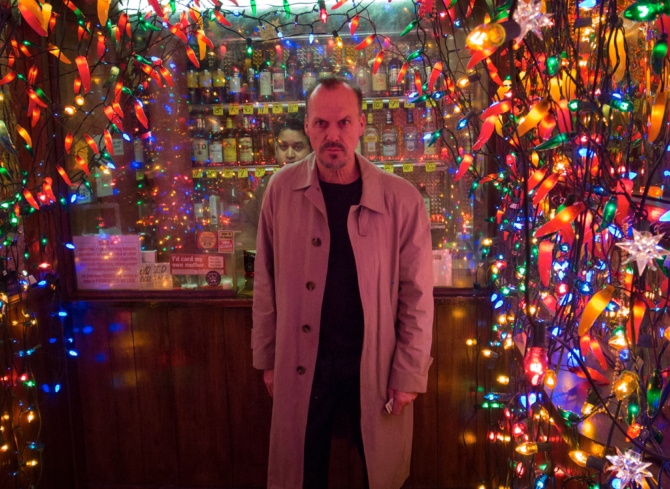 Almost entirely confined to the labyrinth interior of its Times Square theater location (a highlighted exception being one inspired if already promotionally-overexposed spin on a time-honored sight gag), Birdman bears superficial resemblance to an intricate backstage farce like Noises Off . But its hyperventilating hand-held camera choreography is very of-the-moment cinematically, and the sheer speed of well-aimed badinage redolent of both Preston Sturges (in that you don’t want to miss a word) and Robert Altman (i.e. you often do anyway). The magical-realist element that has naturally magnetized all early attention, thanks largely to Keaton’s pop-culture-riff-twanging participation, is at once ingenious and sort of the least-essential element here. Ultimately it leads this movie toward a leap of faith that’s kinda inevitable while signifying nothing, exactly.

But unlike Iñárritu’s prior joints, this one doesn’t make “Oh the humanity” gestures of self-importance. Instead, it’s a gizmo of whimsically mismatched parts that shouldn’t get off the ground at all, but induces wonder and delight by doing considerably more than that. Of course questions remain—what does it all mean? Is Norton’s casting as an impossible-to-work-with major talent a deliberate in-joke in the same way ex-Batman Keaton’s is? But on first acquaintance Birdman is so dense, clever and unexpected that you’ll look forward to seeing it again, even if additional viewings refuse to cough up straight answers.

Dennis Harvey has been publishing film reviews since the era of the typewriter.  He’s a member of the San Francisco Film Critics Circle and currently writes for  Variety, the  San Francisco Bay Guardian, and  Fandor.