Movies keep me awake until all hours of the night and get me up early in the morning because movies help me understand the world.

Understandably, others do not view cinema in the same way. Many treat the movie-going experience as purely “cheap entertainment.” So what happens when someone shells out their hard earned money for a film that feels unsatisfactory? In 1975, a handful of disgruntled patrons started to “right the wrongs” with Jim Sharman’s The Rocky Horror Picture Show  by yelling ironic one-liners at the screen. The phenomenon caught on like wildfire. This was heightened in people’s own homes when Joel Hodgson created Mystery Science 3000 in 1988. The TV series which ran for over a decade, dug up forgotten feature length failures of the past and placed a few wise-cracking smart-alecks at the bottom of the screen. More recently a handful of stand-up comedians have found that “riffing” (talking via stream-of-consciousness) while a film is projected on a screen can really pack the house. While motion pictures have always been easy targets for the frivolous and frustrated, these vocal interruptions not only have harmed many misunderstood movies, they have created an army of arrogance in contemporary movie going critics. While it’s all fine and dandy for a viewer to constantly babble while they are sitting in one’s own living room (perhaps even surrounded by other like-minded folks), when attending one of the few surviving cinemas, these cinematic bullies need to understand there are countless spectators who actually want to experience the film as is, warts and all. 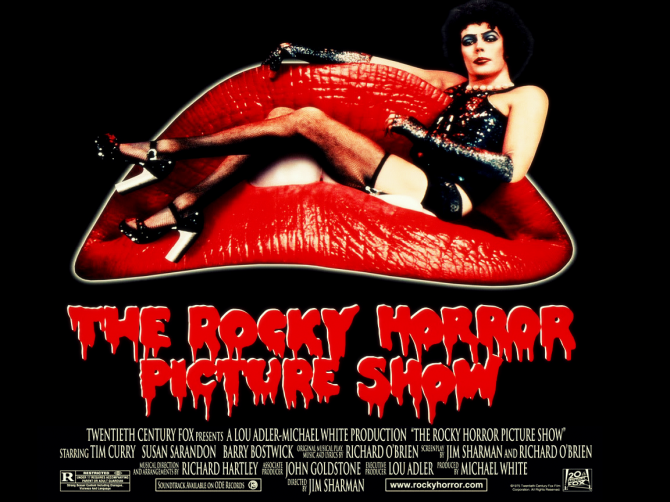 In 1998, I began working at a movie theatre in the Richmond district of San Francisco. This family-operated movie house taught me how to make popcorn, project plattered 35mm films and, ultimately, the opportunity of a lifetime: program Midnight Movies on the weekends. Frank Lee (still the proud owner of The 4-Star as well as the Presidio and Marina Theatres) gave me the keys to create MiDNiTES FOR MANiACS in 2001, a film series emphasizing dismissed, underrated, and forgotten films. Starting with Richard E. Kelly’s overlooked Donnie Darko  (2001) along with Kung-Fu films and low-budget obscurities like John Carpenter’s They Live  (1987) and Rod Amateau’s The Garbage Pail Kids Movie  (1987), I started to uncover the difference between what audiences loved and what many critics were pontificating about. If established writers had initially responded negatively to films like Alfred Hitchcock’s Vertigo (1958) and Ridley Scott’s Blade Runner  (1982), perhaps people had misunderstood hundreds of other films in film history.

In 2008, I met Jeremy O’Neal while we were working at the San Francisco Silent Film Festival. O’Neal often listened patiently to my ramblings about how tired I was of pseudo-comedians audaciously colonizing movie theatres with their outbursts. It had become the status quo in almost every repertory screening for some knucklehead to shriek out some silly one-liner at the screen, with no regard for the rest of the audience. Calmly and heroically my co-worker referred to what I was struggling with — as “Neo-Sincerity.”

People can call this new attitude any name they would like. Some may have the urge to simply call it “Sincerity.” But this concept is not just a return to the supposed good ol’ days because we as a society understand the irony and the paradox of our “History” books and that most likely there were never any actual “Glory-Days.” Neo-Sincerity has reveled in the cinematic skepticism of the frank-talking Pre-Production Code era of 1930-1934. Barbara Stanwyk and Edward G. Robinson were able to whip off poignant dialogue about our muddled society without a moral code to judge them. Yet Neo-Sincerity is also aware of the Production Code era of 1934-1968, when a censoring and blacklisting industry not only attempted to alter any subversive gesture or character trait, but literally destroyed hundreds of artists’ careers. So Neo-Sincerity began sifting through each cynical and fatalistic Film Noir character of 1940-1959, uncovering post-traumatic side effects of the Great Depression, the Holocaust and WWII combined. And Neo-Sincerity continues to frolic in the Post-Production Code era of 1968-1979, which gave birth to some of America’s most transgressive films to date and which are just as visceral now, if not more so.

Most importantly, this new philosophy understands that there has been 125+ years of cinema and that not a single one of those films are perfect. In fact, many of those films are clunky or could have been better or should have stayed truer to the book or would have been better if they had cast Warren Oates or would have been more profound if they had not used any dialogue, etc. But this new attitude is one of pro-active decisions, choices to avoid an accidental disconnection with anything modern. In a sense, this perspective combats grumpy-old-man attitudes that culminate in statements like “they don’t make ‘em like they used to.” This new conviction does not rely on passive aggressive idioms like “guilty pleasures.” Neo-Sincerity is a Post-Ironic movement: Say what you mean and mean what you say. If Michael Winner”s Death Wish Trilogy is one of your favorite franchises, wear a Paul Kersey t-shirt and point out how the films reflect the culture. Be proud that Charles Bronson has affected you somehow.

William Lustig began his filmmaking career learning his filmmaking craft within the late 1970s New York City pornography industry. His first low-budget feature film was Maniac  (1980), an exploitation/Horror flick that dove deep into the early 1980s grime and slime of the worm-infested Big Apple. Stalker films had hit their stride in 1980 with the first half of the year alone, releasing William Friedkin’s Cruising  (February 8), Sean S. Cunningham’s Friday the 13th  (May 9), Stanley Kubrick’s The Shining  (May 23), and Brian DePalma’s Dressed To Kill  (July 25). The genre had been gurgling around with off-color audiences dating back as far as Alfred Hitchcock’s Psycho  (1960) and Michael Powell’s Peeping Tom  (1960). But it was Wes Craven’s The Last House on the Left  (1972), Bob Clark’s Black Christmas  (1974), Tobe Hooper’s The Texas Chainsaw Massacre  (1974) and John Carpenter’s Halloween  (1978) that inspired the explosion of franchises in the early 1980s. These developments caused much dismay among critics and activists, who were becoming increasingly appalled with the onslaught of “irresponsible” violence and sex smothering the screens. Vincent Canby of the New York Times reviewed Maniac  (December 26) by saying “Joe Spinell, who plays the maniac, also collaborated on the screenplay and wrote the original story. He is terrible in all capacities, though his performance is more immediately objectionable. Watching him act like a psychopathic killer with a mommy-complex is like watching someone else throw up.” What’s so odd is these so-called reprehensible “Video Nasties” — see Abel Ferrara’s Driller Killer  (1979) & Ms. 45  (1981) — continue to expand my consciousness about the world at hand while also being some of the most hypnotic and influential films to ever pass through my eyeballs.

William Lustig’s Maniac  and his follow-up Vigilante  (1983) are not  “so bad they’re good.” They are profound time-capsules, that dig deep within their main character’s daily lives. One could even argue how they have shades in them similar to such transcendental films as Robert Bresson’s Mouchette  (1967) and Chantal Akerman’s Jeanne Dielman, 23 Quai du Commerce, 1080 Bruxelles  (1976). Now of course, if you ask Lustig what his goals were or how he achieved some amazing shot, he will quickly respond with “that was the only place we could fit the camera!” But this is also how John Ford aggressively dismissed critics attempting to deconstruct his Western genre entries. There is an immense amount of artistry in the methodical schizoid camera style of James Lemmo, combined with Tom Savini’s gruesome yet mesmerizing SFX and Jay Chattaway’s perfectly-paced synth soundtracks, Lustig’s singular voice becomes as clear as any energetic auteur working in cinema. (Note: Michael Sembello’s Oscar nominated, #1 song Maniac , that now defines Adrian Lyne’s Flashdance  (1983), was originally written for Lustig’s movie.) 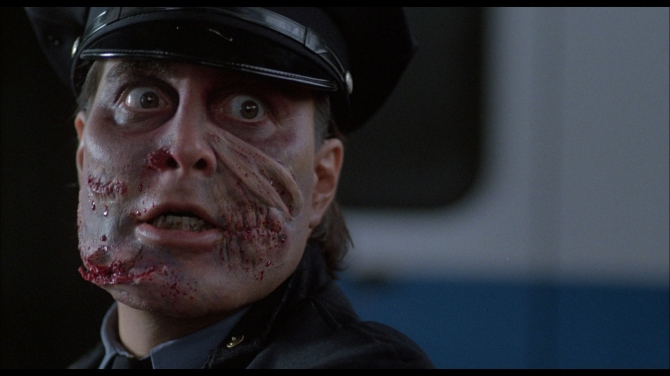 The cult following that has formed over the past thirty-five years towards many of Lustig’s psychologically controversial gore-fests clearly represent the nucleus for the new wave of Horror filmmakers who are sometimes referred to as “The Splat-Pack.” This group, which includes Eli Roth (Hostel), Rob Zombie (The Devil’s Rejects), James Wan (Saw), Robert Rodriguez (Machete), Tom Six (The Human Centipede) and Alexandre Aja (Haute Tension), all cite Lustig’s films as major influences. Aja even co-wrote and produced Franck Khalfoun’s wonderful reimagining of Maniac  in 2012 and art-house favorite Nicolas Winding Refn (Drive) just announced that he will be remaking Maniac Cop  in 2015.

William Lustig is also the CEO of Blue Underground, a home media distributor of authoritative editions of nearly 150 films on Bluray/DVD stateside. The company has gone to great lengths to restore uncut versions of dozens of cult classics including most of Dario Argento and Mario Bava films from their original vault elements, jam-packing box sets with extensive extras. This not only serves the generation that grew up with these cinematic misfits but is also giving upcoming generations new chances to experience these often misunderstood and maligned movies.
MiDNiTES FOR MANiACS has assembled a two-day, six-film retrospective not only to preserve William Lustig’s career but also inspire a new wave of reevaluation towards his entire body of work. This major tribute, to be screened as part of Bay Area Now 7 at the Yerba Buena Center for the Arts, will host Mr. Lustig in person who will be introducing each film. 35mm prints of Maniac , Vigilante  and the 25th Anniversary of his 1989 knuckle-bruiser Hit List  play on Friday, August 15.

Saturday, August 16 has Mr. Lustig at Amoeba Records SF signing autographs at 2:00 pm and will head back to YBCA with the San Francisco Theatrical Premiere of restored DCP prints of the entire Maniac Cop  trilogy. 35mm trailers will precede each screening. An extremely limited edition poster, created by Ghoulish Gary Pullin & Spoke Art Gallery, will be available only at the event. Mr. Lustig finds Maniac Cop 2  (1990) to be his career favorite and, while MC2  should now be considered one of the greatest Horror films of the late-1980s, don’t miss your opportunity to experience any of these passionate low-budget excursions: One of them might become your new favorite film – Neo-Sincerely.

Jesse Hawthorne Ficks is the Film History Coordinator and teaches at the Academy of Art University in San Francisco; he also curates and hosts the MiDNiTES for MANiACS series at the Castro Theatre. The series screens 35mm prints around North America and emphasizes underrated and overlooked cinema in a neo-sincere way. He currently writes for the  San Francisco Bay Guardian as their Film Festival critic attending the Toronto and Sundance Film Festivals.