Five is a charmed number for Mark Harris.  In 2008’s Pictures at a Revolution, he charted New Hollywood’s tectonic shifts by profiling the quintet of films nominated for Best Picture of 1967, from the nouvelle vague-influenced Bonnie & Clyde  to the studio bloat of Doctor Dolittle .  He deploys a similar conceit in Five Came Back: A Story of Hollywood and the Second World War .  Chronicling the military careers of several established filmmakers allows him to tell the sprawling, underreported tale of the Allied propaganda effort.

Harris deftly sketches the industry atmosphere as war clouds gather.  Reigning king Frank Capra, with his three Best Director Oscars, is desperate to keep topping himself while looking over his shoulder at more versatile rival John Ford.  John Huston had scored his first triumph with 1941’s The Maltese Falcon  and initially regarded the coming conflagration as an inconvenience to his inevitable ascent.  When America does enter the conflict, the big names readily enlist, larger-than-life figures with, as Harris notes, the experience of privates but the attitudes of generals.

The ensuing culture clashes are recounted without an ounce of “Greatest Generation” sanctimony, Harris reveling in the foibles of his subjects.  No fan of the bleary populism of Capra’s films, he shows compassion as the director’s sojourn in Washington bureaucracy further unmoors his personal politics.  Ford would do some of the best work of his career in the heat of battle, which makes his early return to Hollywood in disgrace more compelling.  Huston blithely staged recreations for his 1945 “documentary” The Battle of San Pietro , only to have the truths he told about psychologically-scarred veterans in his long-censored Let There Be Light  (1946) prove too much for the government to hear.  Harris’s sympathies lie with the professionals of the company.  William Wyler welcomed his service stint as “an escape into reality.”  His insistence on putting himself in harm’s way to follow aviators on their missions led to permanent injury, vulnerability he would mine for the greatest film about the post-war period The Best Years of Our Lives.  And the urbane George Stevens would be unable to return to his métier of comedy after documenting the D-Day landing and Nazi atrocities at Dachau; he would go on to compile photographic evidence for the Nuremberg trials. 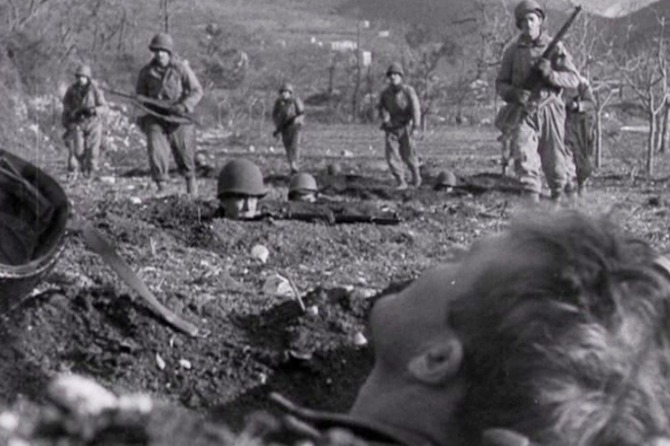 If the book has a hero it’s Lowell Mellett, the ex-newspaperman appointed liaison between Washington and Hollywood for the Office of War Information.  He played a long game, concerned about accuracy in the films he oversaw and bearing the Allies’ eventual victory in mind when addressing issues of racism in the depiction of the Japanese.

Harris’s structure keeps the reins on a narrative that touches every theater of operations while leaving room for the astonishing array of talent that participated in the propaganda campaign.  Irwin Shaw and Eric Ambler have cameo appearances.  Capra’s greatest contribution was an afterthought, approving the “Private Snafu” cartoons beloved by soldiers and spearheaded by Chuck Jones and Theodor “Dr. Seuss” Geisel.  Louis Hayward is dimly remembered as a destitute man’s Orson Welles in lesser noirs like Repeat Performance  and Walk a Crooked Mile.  It’s a revelation to discover he won an Academy Award and the Bronze Star for making the harrowing With the Marines at Tarawa  (1945).  Harris regularly observes how priorities don’t change even in wartime.  American filmmakers coerce their British counterparts into a lopsided collaboration when U.K. efforts like Desert Victory  (1943) surpass their own.  Audiences largely spurn the documentaries in favor of the immediacy of newsreels and grow weary of a diet of war dramas, while the directors lobby to have their federally-bankrolled productions considered for Academy Awards to buoy career prospects back home.

The films ultimately matter most to Harris.  Produced under extreme conditions, they still bear unmistakable signs of their makers’ personalities.  Ford captured riveting footage for 1942’s The Battle of Midway, but couldn’t resist adding a folksy voiceover by his Grapes of Wrath  stars Henry Fonda and Jane Darwell.  Wyler’s instinct for drama compelled him to shape The Memphis Belle: A Story of a Flying Fortress  (1944) around a single B-17’s crew.  These years would transform the directors, Huston later giving vent to his innate cynicism, Ford retreating to the sanctuary of the western, Capra losing his way in the business he once dominated.  The movies they made during this period not only shaped how World War II would be perceived by future generations, but how combat itself would be portrayed thereafter.  In his compulsively readable book, Harris gives the saga the full honors it deserves.

All of the government films mentioned here can be seen in fine prints at FedFlix.

Support your local bookstore or purchase the book through our affiliate link at Amazon.com.

Vince Keenan is the associate editor of  Noir City, the magazine of the Film Noir Foundation.  His book  Down The Hatch: One Man’s One Year Odyssey Through Classic Cocktail Recipes and Lore , collecting the essays featured in  Slate and  USAToday.com, is a Kindle bestseller.  He writes about cocktails and popular culture at blog.vincekeenan.com.  An ex-pat New York Mets fan, he lives in Seattle.